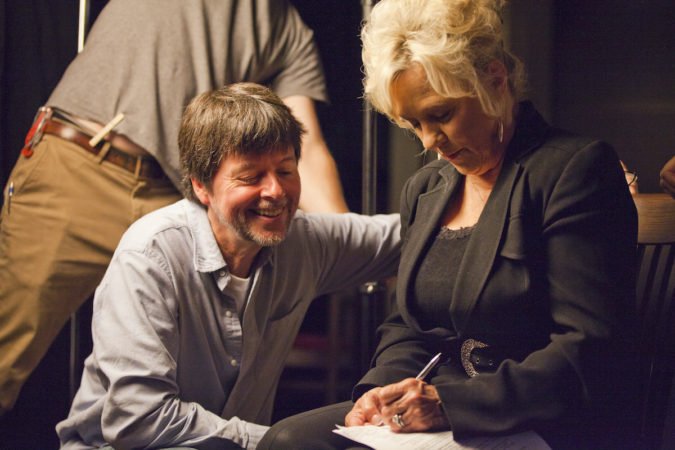 Ken Burns is well aware that the subject of his latest documentary, Hemingway, would be judged harshly in today’s social media. Lack of nuance is one of many reasons he avoids the Internet as much as possible.

Hemingway, a three-part, six-hour documentary film that begins airing tonight on PBS, joins a long run of nuanced, immersive Ken Burns films, from Baseball to the Civil War to Country Music. It portrays Ernest Hemingway in all his genius and complexity, acknowledging his literary successes and personal failures.

Tweet anything you like about it — chances are, Ken Burns won’t engage. Although he uses the Internet for digital research, he says in a piece for the upcoming issue of MovieMaker Magazine that he rejects the “toxic cesspool” of online anonymity, and the way that social media tends to flatten people into heroes or villains.

As usual, Burns is precise with a metaphor. The Environmental Protection Agency describes a cesspool as “a shallow, underground system for disposing of sanitary waste.” Burns, like Hemingway, is more interested in exploring a vast ocean.

“No hero is perfect. No villain is perfectly evil. We live in a binary world that suggests that that’s true. Everything is down to ones and zeros. Everything is good or bad, male or female, rich or poor, black or white, young or old, gay or straight, red state or blue state. And it’s not like that. And there are other periods in American history where it’s been like this. ‘There’s nothing new under the sun,’ as the Bible says,” Burns tells MovieMaker.

Also Read: David Fincher: ‘Perfectionism Is a Term That’s Thrown About Mostly by People Who Are Lazy’

“I have a neon sign in our editing suite that says in cursive, ‘It’s complicated.’ That’s a reminder that too often we settle as people, as filmmakers, as artists, for something that’s seemingly working, when the better thing is the deeper thing, the more complicated thing, that that surf there, that seems so calm, holds deadly riptides or undertow. That seemingly shallow thing is profoundly deep. We’ll leave it to the tabloids to tsk tsk or shame, or the Internet. We’re interested in deep dives.”

Burns is happy to confront Hemingway’s vices, but aims to put every aspect of his life in context.

“Hemingway has monstrous aspects to him,” Burns says. “He’s also one of the greatest writers ever. Somewhere in the tension of that is something that you want to get at that’s true and complicated. This is the kind of thing that we extend to the people that we love. And yet, we don’t do it out in the world. We’re so quick to make a judgement of good or bad, a thumbs up or a thumbs down.”

He adds: “The anonymity of the internet has become a toxic cesspool, which is why I don’t participate. I’m not on Facebook, I have somebody who periodically tweets for me. I don’t need to have my life distracted by bile. There’s enough in our own lives.”

And while Burns embraces digital research — especially in a pandemic — he says there’s no substitute for going and meeting with people, face-to-face.

“There’s nothing outside of COVID-19 that prevents you from going to a place and discovering things that are simply offline,” Burns says. “When you’re in an archive, you have the ability to say, ‘Whoa, what’s that up on the wall?’ in the director or the curator’s office. Or, ‘Do you have anything else that nobody’s asked for?’ ‘What’s the favorite thing that you have in your collection that no one’s come to talk about?’ Inevitably, you find unbelievable things that you don’t find in a digital search.”

Hemingway, by Ken Burns, airs tonight on PBS. You can read Burns’ piece, “Things I’ve Learned as a Moviemaker,” in the latest issue of MovieMaker Magazine, out this month.

The Serpent: Where Is the Real Life Marie-Andree Leclerc Now?
People Are Going Bonkers Over Loki’s Quirky New Buddy in Disney+ Trailer