David Fincher: 'Perfectionism Is a Term That's Thrown About Mostly by People Who Are Lazy' 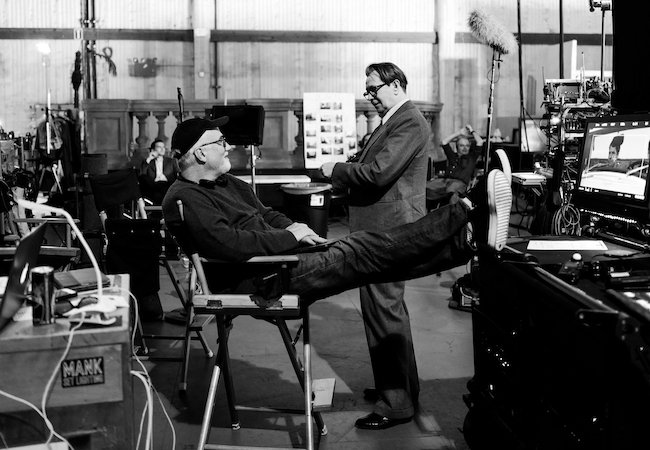 David Fincher is famous for his supposed obsession with perfection: He’s known for doing dozens of takes. He often arrives on set at 5 a.m. to make sure things are just so. He once recorded and decided not to release a two-and-a-half hour interview because he thought it could be better.
But Fincher says in the latest MovieMaker podcast that he doesn’t seek perfection at all — and in fact tries to avoid it. Asked about his reputation for perfectionism, Fincher explains his approach succinctly.
“I think that ‘perfectionism’ is a term that’s thrown about mostly by people who are lazy. We’re not trying to do something perfect. You know, perfect is the commercial,” he says. “You’re looking for stuff to be imperfect in exactly the right way. So what’s important is to be able to articulate what perfect would be, and then avoid it at all costs.”
Fincher spoke to us along with production designer Don Burt, who has worked on every Fincher film since 2007’s Zodiac. Their latest collaboration, Mank, has earned 10 Oscar nominations, including for Best Picture, and for Fincher and Burt. You can listen to the full interview on Apple or Spotify or Google or here:

David Fincher on the set of Mank. Photo by Gisele Schmidt, courtesy of Netflix.

“I think there’s a difference between realizing what perfection is and what something is that’s well thought out. And I think David thinks his things out thoroughly,” Burt says in the episode.
No story about David Fincher seems complete without a mention of his many takes. Amanda Seyfried has said she may have done up to 200 takes for one Mank scene. Fincher has estimated that a nine-minute scene in his Netflix series Mindhunter required 75 takes. Such anecdotes have led to a widespread impression that he is obsessed with perfection.
The Ringer, for example, once devoted more than 5,000 words to his directorial style in a piece that began: “He has a reputation as Hollywood’s ultimate control freak, a director obsessed with attaining perfection no matter how many takes it needs or whose feelings he hurts.” The article quotes Patrick Fugit, who appeared in Fincher’s Gone Girl: “We used to call him the Watchmaker, because everything had to fit together perfectly.”
But during our interview, Fincher gave several examples of how he deliberately avoids perfection. He and Burt carefully consider what information to share with an audience, and what to withhold.
“Something that both Don and I share… is we’re not afraid to go the long way around,” Fincher says. “I honestly believe that the audience, if they can’t articulate it… they feel the difference when someone has thought through something.”
Sometimes that means, for example, that the camera isn’t placed in the ideal location to convey information. Fincher says he sometimes aims to let a sequence unfold in a master shot, without insert shots that might make the action easier for audiences to follow. He cites Costa-Gravas’ 1969 Z and Alan J. Pakula’s All the President’s Men as examples of films that deliberately avoid a heavy hand.
“Oftentimes, if you look at a movie like Z… or even All the President’s Men… they’re not perfect. They’re not in the perfect place to see a certain handoff or transaction,” Fincher says. “The information was missed, and then these guys can go back and talk about it.”
He continues: “Sometimes you want to have the camera right there, wide-angle lens, in tight, and see something that underlines something. And sometimes you want it to play out in the master. And it’s more difficult to get it to play out in a master. It’s more difficult not to cut away to an insert. An insert is often a crutch. It almost invariably gives you an opportunity to make it prettier, or to make it more in control.”
“But Buster Keaton proved if you can do it in the master, and it can register and the audience takes it away, that’s often the hardest. That’s playing without a net.”
As you may have guessed, the podcast interview is filled with moviemaking philosophy. But one point that is inescapable is that Fincher and Burt never settle. They aspire to make deliberate choices about everything the audience sees on screen — which doesn’t mean what appears on screen is perfect.
“If you want it to be easy, fine. That’s your choice in life. Make it easy. And it’s not that we purposely make things difficult, but I think we both — you know, at least I try to, and I make a lot of mistakes, a lot of mistakes — but internally, you try to challenge yourself. You try to challenge your ideas, and you question your ideas, and you say to yourself, ‘There’s this choice and this choice, and is this the right one? Or is this a better way to go?'” Burt says. “And that’s the joy of it, I think.”
Mank is now streaming on Netflix. Main image: David Fincher and Gary Oldman on set. Photo by Gisele Schmidt, courtesy of Netflix.
Continue Reading
Advertisement
Related Topics:david fincher, Don Burt, feature, Gary Oldman, Mank, perfectionism, zodiac

NFMLA Celebrates Black Cinema and the Human Spirit Through Stories of Community and Inspiration
Inside Cypress Cove, the Nude Resort Featured in Netflix's Worn Stories