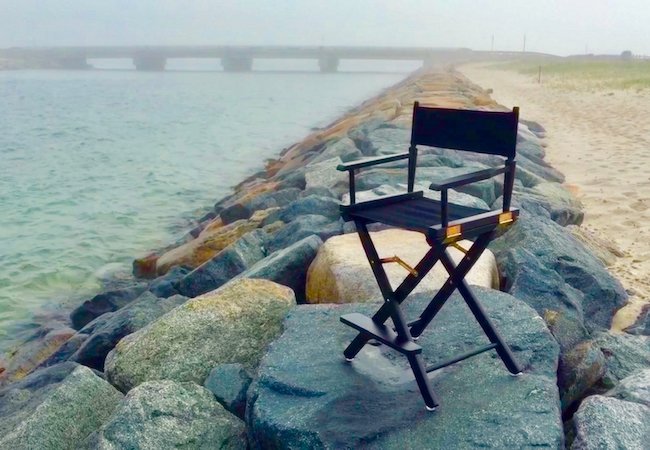 Jaws fans rejoice: Three die-hard fans have released the ultimate Google Earth deep-dive into the greatest shark story ever told. Here’s a link to The Ultimate JAWS Locations Guide, which works best with Google Chrome for desktop and Google Earth for mobile.

Look around, have fun, and enjoy the fact that zero percent of people in quarantine are at risk of shark attacks.

The guide is an interactive 3D map marking the pre-production and production locations from the original 1975 Steven Spielberg film as well as other significant Jaws-related sites on Martha’s Vineyard. The creators set out to build “the most comprehensive and accurate Jaws location resource anywhere.” 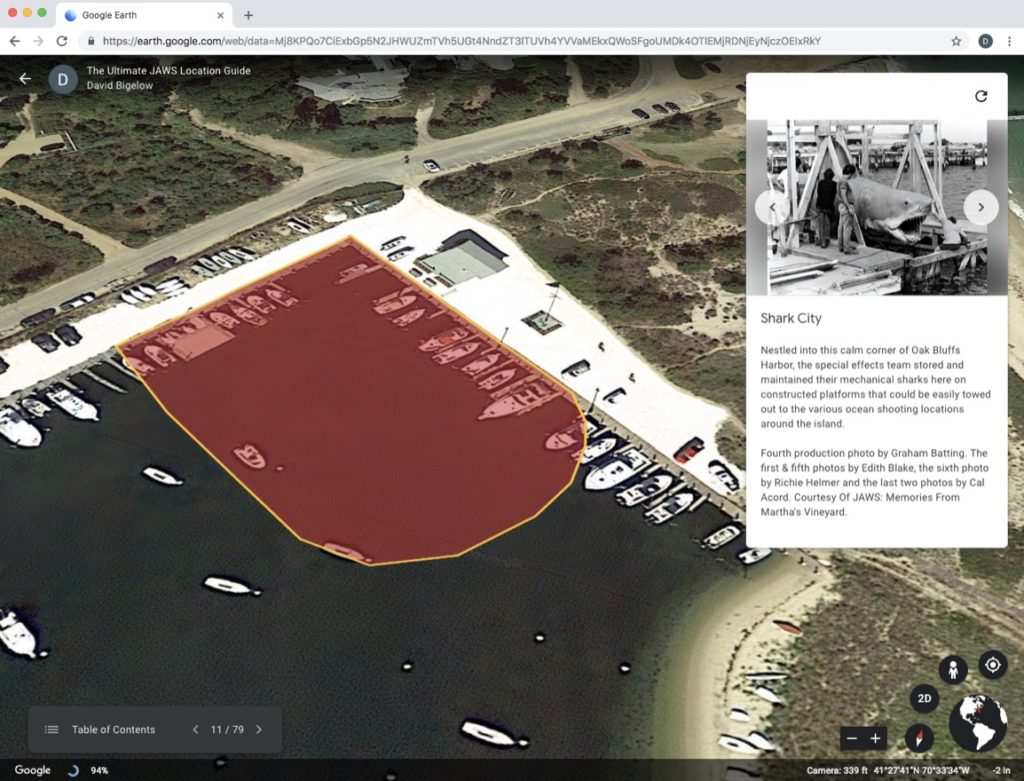 With more than 70 locations mapped, including detailed information and rare, never-before-seen photographs from the production, the tool is geared both toward people exploring from home, and those who will eventually visit Martha’s Vineyard in search of sites where the first summer blockbuster was filmed. It also includes Martha’s Vineyard locations used in the filming of Jaws 2 and Jaws: The Revenge, and areas in Los Angeles where shots from Jaws were filmed.

Bigelow was an extra in the film as a small child, and is the leader of the project and creator of Making The Monster, a Jaws docudrama in production with with Jeridoo Universe. The guide is part of the research for the series.

Beller, one of the world’s leading collectors of Jaws memorabilia and a co-creator of the best-selling book, JAWS: Memories from Martha’s Vineyard, contributed background and exclusive photography to the project.

And Campopiano, a filmmaker (and beloved MovieMaker contributor), provided historical background and archival value to the map. 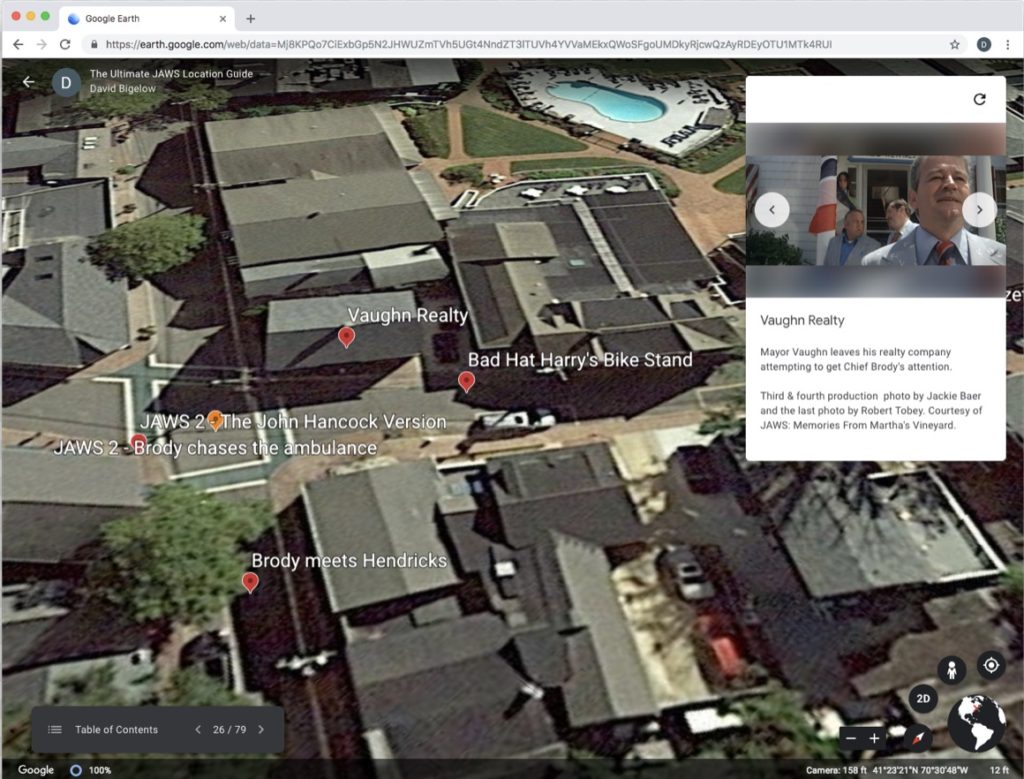 “We’re excited to bring this resource to fans of JAWS,” said Bigelow. “We wanted to share it with the world as we believe it’s unlike any other map developed for the 1974 production. The map will be available online in both desktop and mobile formats so that it can be enjoyed at home or as a mobile companion to visiting Martha’s Vineyard and touring the locations in person.”

Added Beller: “I was so excited to be a part of this project. There’s nothing out there like this and it’s been a long time coming. Years ago, I was part of a team of people who created something similar in video form called ‘Lou and Yana’s Jaws Fest DVD’ which I loved, that laid the groundwork and research that have gone into this map. Now with this new format, it’s been made even more accessible. Much of the photography used has never been seen and some of the locations in the guide have never been documented in such detail. As a living document that can be added to, we will be able to introduce new sites, photography and information as they come to light. For now, what we have is a treasure trove of information any fan will love diving into.” 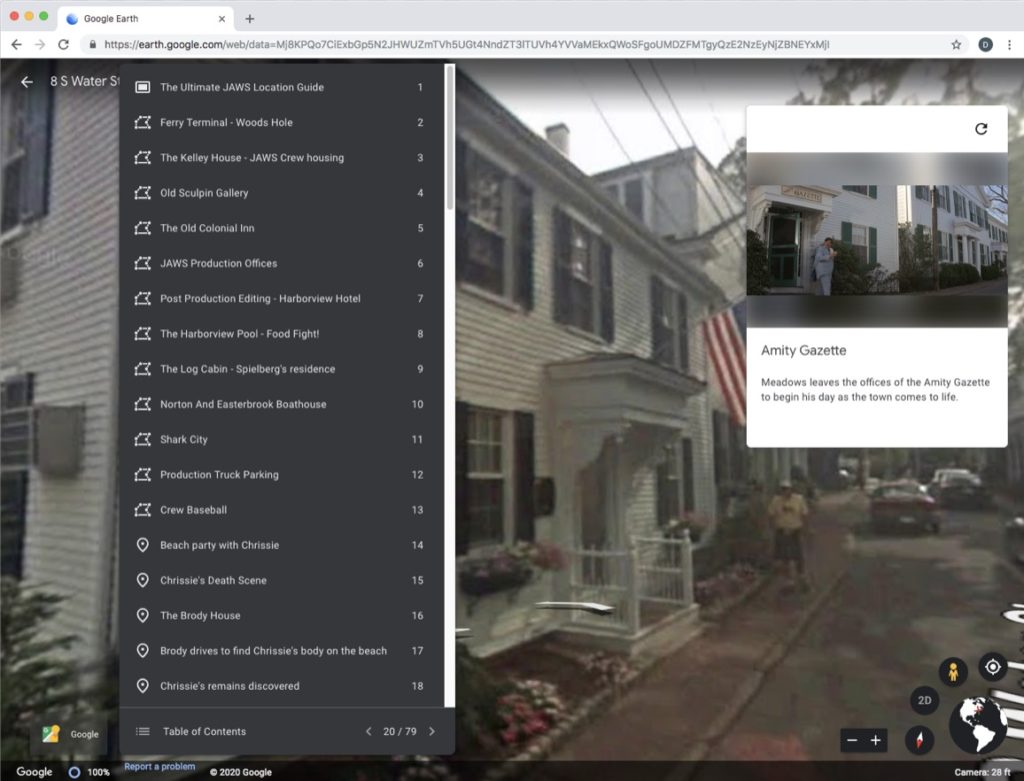 Concludes Campopiano: “For me, physical places hold stories and secrets—unique lineages of times long ago and people long gone. As a JAWS fan, I began finding and documenting JAWS locations with Jim and others as part of ‘Lou and Yana’s Jaws Fest DVD’ series. As an archivist, I’ve always valued the power of our physical world, whether filming locations from movies I love or spaces that have roots in my family history. So, The Ultimate JAWS Location Map was a perfect project for me to help with as it bridged together three things I hold dear: JAWS, the power of place, and our collective histories.”

Good lord, what are you still doing here? You could, at this very moment, be in Shark City.

(And yes, Shark City is a real place. As Bigelow explains: “Oak Bluffs is where all of the mechanical ‘Bruce’ sharks were kept between shooting days on the ocean.” We told you these guys knew their stuff.)