Benjamin Wallfisch says he started with total silence when he set out to compose the score for The Invisble Man. And he ended up paying homage to one of the most classic film scores of all time — Bernard Hermann’s stabbing musical notes for Alfred Hitchcock’s Psycho.

Like the title character of The Invisible Man, Wallfisch’s music disappears from time to time. It cuts out unexpectedly, only to cut in with chilling aggression. Wallfisch says the film’s director, Leigh Whannell, asked for those silences.

“What was great was that Leigh sent me a full cut of the film with absolutely no temp music—it was completely silent, musically,” Wallfisch told MovieMaker. “It was really lovely to not have any temp and be given this fresh canvas. Leigh was pushing me to be very extreme and left field in some of the music choices. For example, the electronic sound theme, if you will, for the Invisible Man character we pushed to an extreme.”

Wallfisch added: “I also wanted to make it a little love letter to my hero Bernard Hermann by using just a string orchestra in the same way that he did with the Psycho score. The strings are the main thrust of the orchestra and that means they have to work all that much harder and be pushed to their max without the support of French horns, woodwinds and other instruments.” 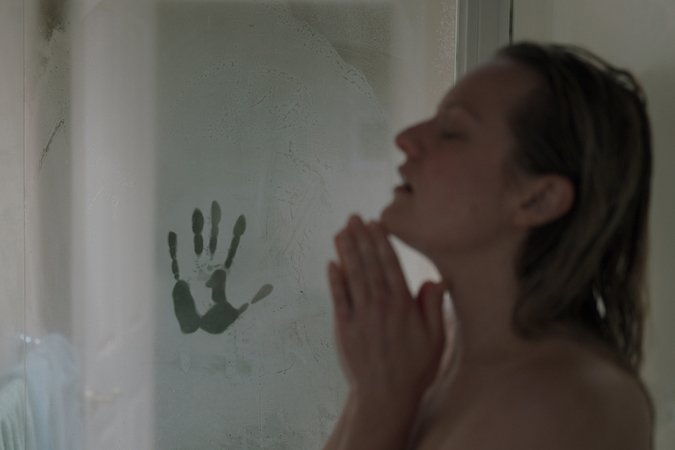 Wallfisch, whose other credits include Blade Runner 2049 and A Cure for Wellness, spoke about his musical upbringing, his love of John Williams’ score for E.T., and the Invisible Man musical motif called The Growl.

MovieMaker: How did coming from a musical family impact you as a kid and budding composer/musician?

Benjamin Wallfisch: I was very lucky to have been brought up in a house where music was just a fact of life. Everyday I’d be surrounded by my dad practicing the cello, mom practicing the violin, grandfather practicing the piano when we were visiting them. Music, for me, equaled family. I think it was also great to see first-hand how much work it takes when you commit to being a musician. It’s many, many hours every single day, seven days a week of practice and there is no compromise on that.

I saw that with my own eyes from a very young age with my own parents. I think that had a huge impact on me. I was also very lucky that they had such open minds—my parents—in that, even though I was trained in the classical world, when I started to pursue my love of narrative music and film music, there was no sense of “Well, you’re leaving the family tradition behind” or anything like that. They were all incredibly supportive.

And, of course, it shouldn’t have been that way, anyway, because in this day and age there really isn’t that sense of a divide between those two worlds anymore. Film music is now so hugely embraced by the orchestral world that I think that divide has gone away which is a wonderful thing.

MM: We know at one point as a kid you even considered becoming a cameraman…

Wallfisch: Yeah, to this day I’ve been hugely passionate about photography. That’s my big love outside of music. I’m a total nerd and have spent way too much money on lenses and camera equipment. For me, it has always just been a fascination with how films are made—the craft and the technical aspects. It has always excited me to see genius craftsman in the field do what they do. It was great for me early on to find a pathway to work with people like that—to be a part of that world.

MM: What are some of your earliest memories of being moved by a film score?

Wallfisch: I always give the same answer to this question because it’s a film and film score that still moves me to this day: E.T. I always come back to that score not only because it had such a big impact on me as a kid, but because it’s the most extraordinary piece of work. It’s just such a masterpiece of music, let alone as a film score. It’s always so humbling whenever I hear that score. Personally, I think it’s his [John Williams’] best work. I’m sure a lot of people will disagree, as of course everything he writes is genius.

Growing up in the 1980s we were surrounded by scores like E.T., Star Wars, Back to the Future, and the music of Alan Silvestri, Jerry Goldsmith, and on and on. I was also a massive Bernard Hermann nut growing up—I’m still really obsessed with his work. I’ve been influenced by lots of different kinds of music. I’ve been deeply interested in electronic music—there’s something about the other worldliness that has always appealed to me, especially as a kid growing up. When I first heard the original Blade Runner score back in the 1980s it floored me. It was just a great time to be a kid and be interested in movies.

Paul Scheer Knows Watching Movies and Talking Will Help Us Get Through This (Podcast)
Sidney Flanigan in Never Rarely Sometimes Always: From a Backyard Wedding to International Acclaim