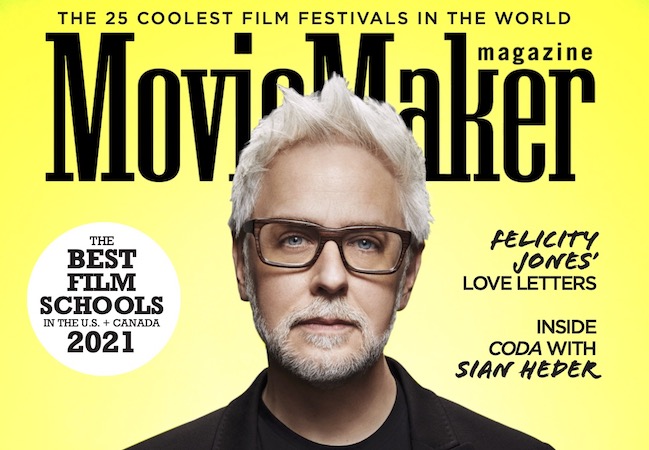 James Gunn gets candid; Felicity Jones seeks raves; Sopranos stars say James Gandolfini was paid $3 million to not be on NBC’s The Office. Also, Facebook is giving out a billion dollars to you creative types. All in today’s Movie News Rundown.

James Gunn: The director of the Guardians of the Galaxy films and the upcoming The Suicide Squad gets very candid and very funny about the highs and lows of his life and career — and how it all led to his new supervillain extravaganza. Here’s the Q&A from our brand-new issue, entitled “James Gunn Doesn’t Need to Shout.”

More James Gunn, Please: You got it. Here’s our new digital cover, beautifully shot by Art Streiber and designed by Kay Scanlon:

I'm honored to be on the cover of Moviemaker Magazine’s digital issue this month. Out now.https://t.co/9ktajgaYXH#TheSuicideSquad @moviemakermag pic.twitter.com/1ZWZOxAk6K

How Is The Suicide Squad? Excellent, according to this roundup of early reactions by TheWrap‘s Umberto Gonzales and Ross Lincoln, both of whom I have worked with and trust. They write: “It’s wise to take these things with a grain of salt. Studios curate very early movie previews — The Suicide Squad doesn’t hit theaters until Aug. 6 — to maximize hype. Plenty of times fans have poured out of a screening of a movie with gushing praise, only for the film to turn out to be terrible. But uh, that said, this movie was written and directed by the always excellent James Gunn. … In this case, we believe the hype.”

Felicity Jones? Raver: One important detail you may have missed from Margeaux Sippell’s cover story on Felicity Jones is that, after months on lockdown, what she really wants to do is go to a rave. Can you imagine Supreme Court Justice Ruth Bader Ginsburg, who Jones played in On the Basis of Sex, wearing a Cat in the Hat costume and shaking glow sticks at a rave? Yes you can? Great point.

Oh Facebook, You Old Charmer: Facebook may not be the coolest of social platforms (also, there are no cool social platforms) but it does have huge amounts of money. So it will pay out $1 billion through 2022 to “content creators,” some of whom are also known as moviemakers (or filmmakers, if you want us to be less brand-y) to encourage them to spend more time making stuff for its audience instead for those other platforms. Full disclosure, I have a little bit of stock in Facebook but can’t remember my login. The New York Times, for which I also forget my login, has more.

The Legend of James Gandolfini: Sopranos stars Michael Imperioli and Steve Schirripa told guest Rcky Gervias on their new Talking Sopranos podcast that HBO once paid James Gandolfini $3 million to not take over for Steve Carell on The Office. You may be saying: What? Me too. Watch for yourself, it’s all cued up:

Also All Cued Up: The missus and I happen to be rewatching The Sopranos in anticipation of the new prequel film The Many Saints of Newark and darned if this brushoff from special guest star Amy (Alicia Witt) to Christophuh (Michael Imperioli) in the episode entitled “D-Girl” isn’t the most note-perfect Hollywood brushoff in the history of note-perfect Hollywood brushoffs: