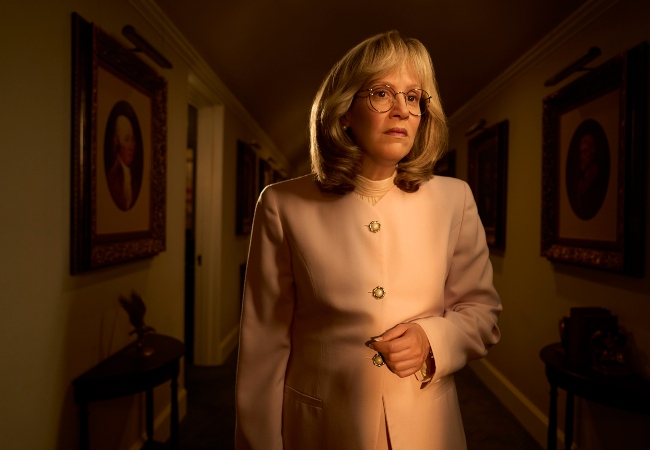 Longtime Murphy collaborator Sarah Paulson (American Horror Story, Ratched) plays Tripp in Impeachment. But the real-life Linda Tripp passed away before she could see Paulson’s portrayal of her on cable television — or meet Sarah Burgess, the screenwriter who spent countless hours pouring over books, documents, interviews, and audiotapes to understand Tripp’s reasons for recording her phone conversations with Lewinsky in which the young woman revealed intimate details about her sexual relationship with the president.

Tripp died on April 7, 2020, according to her obituary in the New York Times, though her former lawyer, Joseph Murtha, did not provide a cause of death. According to NPR, Tripp had at one point battled pancreatic cancer, though it’s unclear whether she died from the illness.

Burgess sorely wishes she could have met Tripp before her death. She said that she “felt connected” to Tripp when she was writing Impeachment, and put emphasis on painting a fair, nuanced picture of her rather than casting her as a one-sided villain, as she has often been portrayed in the media.

“I would have loved to talk to her. It was very hard for me when she passed away last year that I’d never got the chance,” Burgess told MovieMaker. “I don’t believe characters have to be quote-unquote ‘likable,’ especially female characters. That can be sort of a trend that we fall into. Women are sometimes expected to behave differently from men and female characters have to have this more explicit warmth or vulnerability sometimes. Linda’s a messy and complicated character and someone who I… had great affection for as I was writing.”

Also Read:  Monica Lewinsky Hopes Impeachment: American Crime Story Is the Last Time She Has to Talk About This

Burgess isn’t sure whether Tripp was ever aware of the FX series’ existence while she was alive. It was still in production when she died, and Tripp says the show’s general policy is not to reach out to its subjects for their input — Bill and Hillary Clinton were not contacted, either, though they are played by Clive Owen and Edie Falco, respectively. Lewinsky’s role as a producer on the series is an exception to this rule, allowing her some control over how she — played by Beanie Feldstein — was portrayed during the most vulnerable moments of her life.

Burgess says she was always confident that the way she wrote Tripp was fair, but that after learning of Tripp’s death, she did reconsider one part of the script.

“I didn’t feel that I had to change course because I already felt that I was writing so much from her point of view. I think it did briefly — her death made me reconsider how I would end her character. I will say that. I don’t want to give away too much,” she said. “Her final moments in the show, I think I reconsidered after her death.”

Tripp worked in the White House for multiple years before being transferred to the Pentagon to work in the Department of Defense, where she met and befriended Lewinsky. Tripp ultimately became famous for turning over tapes of their sensitive conversations to Independent Counsel Kenneth Starr and then later wearing a wire for the FBI to record another conversation with Lewinsky. But Burgess does not believe that Tripp ever intended for her actions to hurt Lewinsky as much as they did.

“I don’t believe this person is a complete monster,” Burgess said. “I have studied Linda Tripp so carefully over the past three years, I’ve developed I think what I would describe as an obsession with Linda Tripp… I personally wrote the story believing that she was acting on instinct and did not totally understand the forces that she was unleashing,” she added. “I wrote the story believing that some part of Linda Tripp is aware of the problems with what she did, and I think felt the need to articulate different ideas in the press because she felt under attack. And there’s a tragic loneliness to that to me.”