How to Sell Your Movie to Netflix, According to Someone Who's Done It

Jeremy Beasley licensed his independently made movie, Small Is Beautiful: A Tiny House Documentary, to Netflix in 2016 — and he says you can, too.
The Australian film director made a YouTube video on his channel Armchair Explainers that outlines the basics of how to do what he did, which you can watch above. We chatted with Beasley to see what other tips he had to share with indie filmmakers looking to learn from his success.

If You’ve Already Made Your Film

In Beasley’s video, he notes that things have changed since his film Small Is Beautiful: A Tiny House Documentary came out in 2015. But he says it’s still entirely possible to license a film to Netflix that’s already been made.
“My producer actually sent me a link the other day of someone who had recently licensed their film. I think the problem Netflix is facing from a more existential place is Sony and Universal and all of those [large studios] are not putting their films on Netflix, or Netflix is running into licensing issues a bunch. So I think what they’re doing is saying, we want original content so we don’t have any of these problems in the future. But I think if you’re going direct to them as a small guy like we were, I think that’s probably still fine,” Beasley told MovieMaker.
So if you’ve already shot your movie and are beginning the next steps in terms of distribution and all that good stuff, follow on for Beasley’s advice.

Make sure it meets quality standards

The first thing you have to do before you can think about approaching streaming services like Netflix, he said, is to get your film approved by their preferred fulfillment partners, which he describes as gatekeepers who make sure the film meets all of the service’s quality standards.
“They kind of are, like, standing there with a big sword and a shield,” Beasley said. “They’re like, ‘You shall not pass unless your work meets these requirements’ — which are quite expensive to meet, to be honest. Like a bunch of the mastering and all of that stuff is really expensive.”
Also Read: Constellation Incubator Asks: ‘Why Aren’t Filmmakers Making Money?’
He adds that a digital cinema package (DCP) — the files that include all the cues for playing a film in a cinema, like when to dim the lights, when to open the curtains, etc — can cost as much as $10,000, which is a lot for indie filmmakers on a small budget. But, he said, there are other ways to do it. He was able to have one made through a friend of a friend for a tenth of that price, so it helps to get creative and talk to the people in your community. 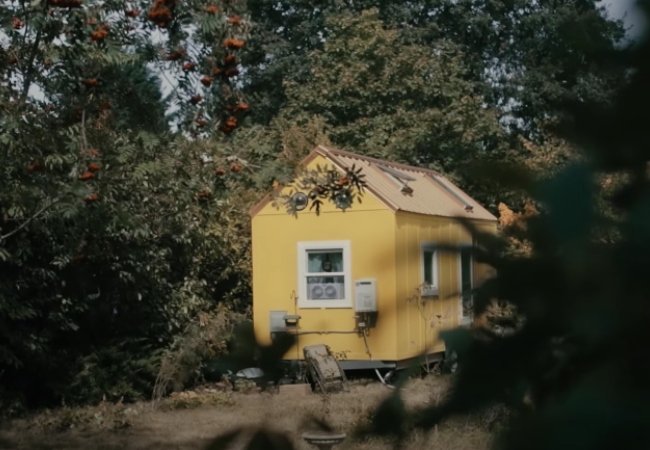 A tiny house from Beasley’s film, Small Is Beautiful: A Tiny House Documentary, pictured in his YouTube video “How I Sold My Film to Netflix.”

For the independent filmmaker looking to license an already-made film to Netflix or another VOD platform, the next step after making sure it meets the streamers’ technical standards is to find an aggregator that has a relationship with the service to pitch your movie for you. Unfortunately, there’s no way to do it yourself if you want to get on iTunes, Google Play, Netflix, etc. You might try a company like BitMax or Quiver Digital. This blog post from Filmmaker Freedom has a lot of useful information.
The way Beasley did it was to use an aggregator to get the film on iTunes first. It shot up to the No. 3 spot on the movie charts. Then he set about getting it seen by someone at Netflix.
Also Read: Who Is Crystal Theobald’s Killer in Netflix’s Why Did You Kill Me?
“You have to provide a bunch of collateral marketing materials, but also awards, successes, stuff that you’ve done to kind of be like — you’ve got something out there. Most people would include something like, oh we got into this festival and we won an award, which is really hard to do and so out of your control,” he said.
Without any awards or festival entries, his team used the size of their mailing list and the success on the iTunes chart to sweeten their pitch. It also helped that when they were pitching the film, its subject — tiny houses — were extremely popular and trendy.

If You Haven’t Made Your Film Yet

Beasley said that if you’re just getting started on the idea for a film, you have an extra advantage because you can cater it — and your audience — to what streamer services are looking for in the hopes of selling them the exclusive rights.
“It takes a lot of time to build an audience and get involved in little niche groups and things online,” Beasley said. “And now with Reddit, Facebook groups, all of that sort of stuff — if you’re making, say, a documentary, there is some niche interest group on whatever it is you making.”
“If you’re going to start doing that and building those connections and stuff, it helps in the filmmaking process, but also later on when you’re trying to promote the film, there are already these communities who will get on board,” he adds. “They know you and they trust you and they want to push your things out there.”
He said Minimalism: A Documentary About the Important Things, which landed on Netflix in 2016, is a great example of that.
“They built little Facebook groups that had 100 or 200 people per city in the U.S. and did these little live events around it,” he said. “They had a big sort of army of people, and many, many thousands on their mailing list, so it was very easy for them to pitch and sell to Netflix.”
Also Read: Was ‘White Boy’ Rick Wershe Jr. Really a Drug Kingpin?

In Any Case, Understand What Streamers Want

“What the platforms want are people to stay on the platform to watch more movies — and they want to bring new people on it to buy a membership,” Beasley said. “Use that as your mindset of, like, how do I get people on there? Or, how do I get people to stay on there longer? ….If you have, 5, 10, 50, 100,000 people interested in watching your film, that probably makes sense for someone like Netflix to be like, well, a bunch of those people might not actually be Netflix subscribers yet, so this is a good opportunity.”
It also helps to look ahead at what sort of trends or subjects might be popular when the film comes out.
“It’s so much easier to push a rock down a hill than it is to push it up a hill,” Beasley said. “If you’re going against the grain in terms of things that are that not very interesting, not many people like it — I feel like your film has to be 100 times better than an average film to have a shot, which is really, really hard.”
He adds: “If there are people particularly interested in the subject, that’d be much easier to pick up. If you think about stuff — like privacy at the moment, or, you know, Facebook data and all that kind of thing, there’d be a bunch of shows popping up about that, because people in the ether are generally interested in those things.”
Main Image: Jeremy Beasley pictured in his YouTube video “How I Sold My Film to Netflix”

The Cinematographer of the Greece-Set Monday Takes Us into His Sun-Kissed Camera Kit
One Camera, One Actor, One Room and Some Broken Rules: Watch the Short Film 'Calls'