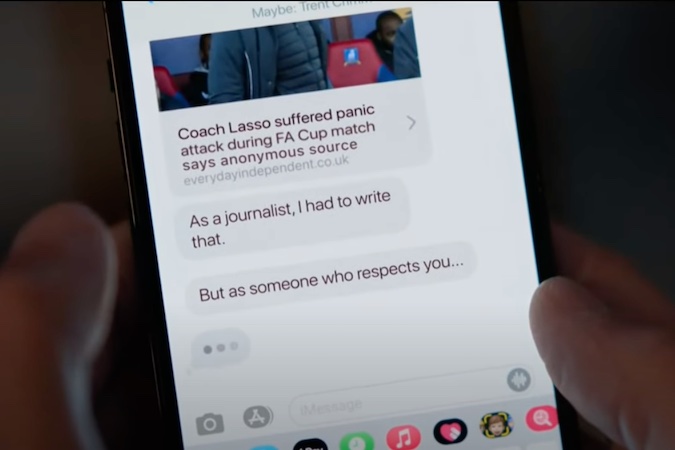 If you’re writing a movie or TV script set in the present day, the moment will probably arise when your lead character sends or receives a dramatic text message. Some of us even text more than we talk — so some films have just as much text messaging as they do dialogue. But how you format text messages in a screenplay?

We’re going to lay out some examples here from films that handle texts artfully. The best way to write something, as is always the case in screenwriting, is to make it as easy to read as possible. As Last Night in Soho and Oscar-nominated 1917 screenwriter Krysty Wilson-Cairns recently told us, you want readers to forget they’re reading a screenplay and instead visualize your story on the screen.

Okay, turn off your text alerts, and let’s dive in.

How to Write Texts Into a Screenplay

Why not start with the film that won the Oscar for Best Original Screenplay at the latest Academy Awards? Promising Young Woman director-writer Emerald Fennell clearly knows what she’s doing.

Like all great screenwriters, Fennell keeps things as simple as possible. There aren’t a lot of text messages in Promising Young Woman, but texts are very important to the film. The texts we’re going to look at come at the end of the film, but we don’t think sharing them here will spoil anything if you don’t have the context of the rest of the movie. (By the way: See Promising Young Woman! If you care at all about screenwriting, it’s a must-watch.)

Fennell handles the question of how to format a text message in her script very elegantly: She just writes it into the action. Here’s how she describes one character, Ryan, receiving a text:

And then Ryan actually receives the text:

In your own scripts, of course you can skip the whole moment where the character sees that a message is pending — Fennell is just ratcheting up the tension, for reasons that will become apparent when you see the movie. You can download the Promising Young Woman script PDF here, since Focus Features, the film’s distributor, made it available online for last year’s awards season.

Perhaps no film released last year contained more text than Spree, Eugene Kotlyarenko’s horror-satire about a driver whose insane night is broadcast online as a growing audience weighs in, Greek chorus style, through a series of internet comments, texts, and other written communication. (Astonishingly, Kotlyarenko wrote all 7,000 internet comments that appear in Spree.)

Kotlyarenko and Gene McHugh, the co-writers of Spree, handle texts the same way Fennell did in Promising Young Woman: They just write them into the action. They write out the texts, but don’t center the name of the person sending the text, like you would the name of someone speaking a line of dialogue. Here’s an example of how they handle texts from a character named Bobby:

Here’s another example from Spree:

How to Write a Text Exchange in a Screenplay

What if there’s a back-and-forth text exchange? Here’s how the pilot script for the Emmy-winning comedy Ted Lasso, by Jason Sudeikis and Bill Lawrence, handles an exchange between the titular character and his ride-or-die friend Coach Beard:

You may also wonder, as a screenwriter, if your texts should appear on screen, alongside the characters, or in close-up shots of their phones. And the good news is: Not your problem!

Here we refer to more terrific screenwriting advice from Wilson-Cairns: Don’t incorporate camera movements or other direction into your screenplay. How your texts appear on screen is up to the director and cinematographer.

Any other questions about how to format text messages into a screenplay? Hit us up in the comments — we’ll get you an answer quickly. And also feel free to share any other scripts that you think do a great idea of including text messages.

Main image: A crucial text in an episode of Ted Lasso.