How They Did It: Tips on Recreating Period, VFX, and Big Action on a Low Budget From the Director of Gangster Land

“A lot of times you get credit for stuff in your movie that you didn’t intend to be there.”

This quote by Spike Lee perfectly describes the process of crafting Gangster Land. My style when I shoot is usually to keep things pretty fluid, allowing for maximum flexibility. I definitely don’t like to paint myself into a corner. But the scope of this movie made us really get creative.

Every time I dive into a project, I go in with the goal of not only making something that will get people’s attention, but making something that requires me to push myself to grow as a filmmaker. Any time you allow yourself to settle, you’ve stopped caring, and if you don’t care about what you’re creating, why should the audience?

When I first read Gangster Land, I pictured something between Great Gatsby and The Untouchables: bold colors, blazing Tommy guns, and an endless supply of bootlegged whiskey. This would have been an ambitious task on a studio budget, much less our modest indie budget.

I knew that we were going to have our work cut out for us: telling the story of notorious gangster Al Capone recruiting amateur boxer “Machine Gun” Jack McGurn to help fight the Irish and protect his empire of crime. Immersing our story in the crime-ridden streets of Prohibition-era Chicago was going to be a challenge unto itself.

Sean Farris in the ring as Jack McGurn in Gangster Land. Image courtesy of Cinedigm

Having directed multiple period westerns in the past, I knew from the start that you can’t shoot a period piece the way you’d shoot a modern movie. With a period piece you have to build the world from the ground up. Every element has to be thought out—from the wardrobe, to the hairstyles, to weapons, cars, and locations.

We knew early on that one of the biggest challenges we would face would be trying to recreate 1920s Chicago exteriors in Los Angeles with our limited budget and limited resources. If we shot on a practical street, everywhere you’d look you’d see modern cars and fixtures. We had to find a backlot that had character and texture, and looked like it could be Chicago without breaking the bank.

Once we identified our most realistic backlot options, we had to find a way to source antique cars within our limited budget. In order to be cost-effective, and to take advantage of our backlots, we knew we had to block shoot the majority of the exteriors over a five-day period. That way the cars could be booked out for only 1/4th of our 20-day shoot, which helped with the budget and allowed us to get maximum effect for our exteriors.

Since we needed to double certain areas of the backlot for different wards of Chicago, the next key element was utilizing set extensions by adding green screens at the end of the different city blocks in order to extend streets or change the look of a street depending on the production needs. With these few key elements it really felt like we’d been dropped smack in the middle of the 1920s.

For the night exteriors we went for a more stylized look. One example of this is the scene towards the beginning of the film where Bugs Moran hijacks one of Johnny Torrio’s trucks on their way back from Canada with a bed full of Canadian whiskey. We shot the close-ups of the scene in a warehouse so we could better control the lighting and fog. Several weeks later, we shot the wide and establishing of the truck driving through the woods and used fog and silhouettes to make the truck appear in true classic noir style. 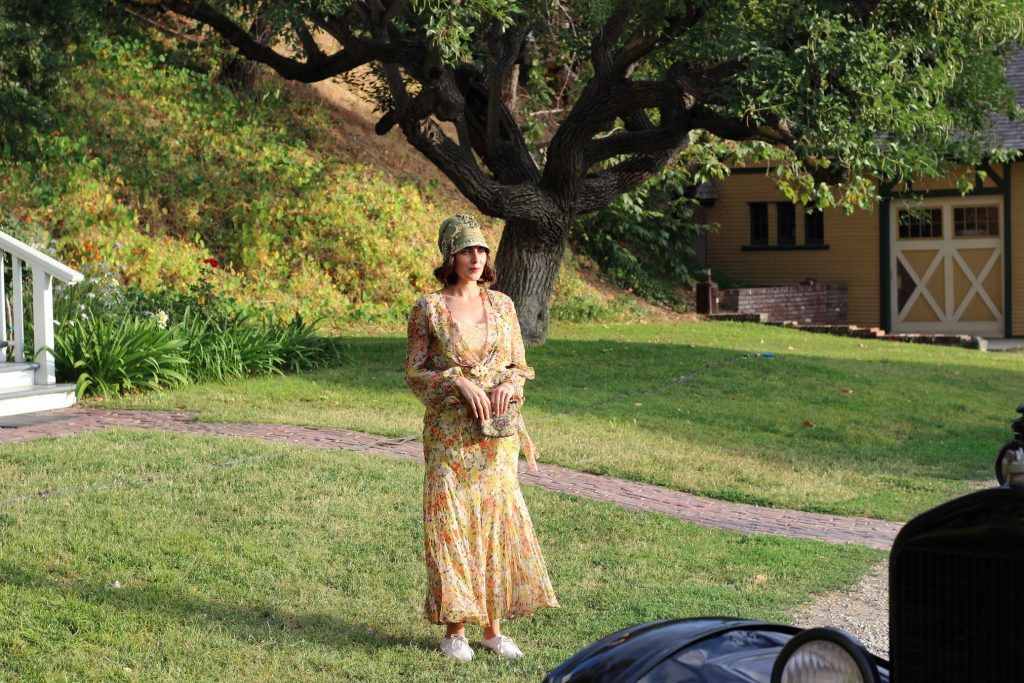 My DP (Director of Photography) Pablo Diez and determined from the beginning how important the look and style of the film was. We wanted to go for a classic film noir look: mirrors, smoke, etc., and then use camera movement and practical effects for the action sequences.

Story wise, we only had a few opportunities to showcase the roaring ’20s in all its glory. One scene in particular was where Jack meets his future wife and partner in crime, flapper/dancer LuLu Rolfe. The scene calls for the Four Deuces Night Club, which was a famous underground speakeasy run by Johnny Torrio and Al Capone.

With this being the only speakeasy in the film, we really wanted to make it feel grand. When I closed my eyes, I pictured The Edison in downtown Los Angeles. Then reality set in and I was reminded that this was a little indie film. When I opened my eyes I was standing in the middle of a modern, all-white banquet hall complete with disco ball and glowing green exit signs, with twelve hours to recreate and film Al Capone’s 1920s night club.

It seemed an impossible task. I stood in the center of that room, turning in circles and flat-out refusing to allow the actors in the building, fearing that if they took one look at what we had to work with they would lose faith in me as a director and the project would be over before it could get off the ground. I knew I was in for some massive creative problem solving.

Because we’d already discussed shooting this type of scene in a classic noir way, my plan originally was to show the world, then punch in for coverage. That plan wasn’t going to work in this space, so after a few hours of putting my head together with Pablo, we decided constant movement was the only way we could make the scene work in an exciting way.

We decided to use a steadicam. Coordinating the camera movement with the movement of the background dancers, we achieved a single long-take, allowing us to control what the audience sees in an interesting way.

This was one example of how our limited budget and resources forced us to think outside the box, get creative, and come up with a solution that resulted in something magical.

With a production this size we had to be careful of how to shoot certain action scenes. One of thing I try to do in all my films is use as many practical effects as possible.

First thing we had to do was to scour all of Los Angeles to find who had a blank firing tommy gun. Tommy guns are a kind of submachine gun, designated Class III by the National Firearms Act, meaning they’re heavily regulated. We knew we could only have the guns for a limited time.

The second thing was figuring our the most exciting way to film these scenes. We knew we didn’t want to film someone shooting the Tommy gun, then cut to the person being shot. We wanted both people in the frame at the same time, but obviously for safety reasons we couldn’t fire a tommy gun directly at someone five feet away. For this case we decided on split screen magic.

In the scene where our hero Jack McGurn assassinates another gangster in an alley, by locking off the camera, we could film McGurn shooting the blank firing gun into the air safely, then film Tropea getting shot. Split screen techniques were then used to splice them together. This sells the illusion that the victim is being shot two feet away by this machine gun that fires thirty rounds per second.

We also used this technique when we filmed the scene where members of each gang were shooting point blank at each other from two speeding cars. Again, we locked off the camera, filmed one side of the frame where the car drives down the road shooting into the empty air, then reset and shot the other side. In post-production we spliced both sides together, giving the illusion that the men in the cars were shooting directly at each other while speeding by the camera in the middle.

Gangster Land was by far the most ambitious and difficult project to date, but at the end of the day it was extremely rewarding to push myself beyond our budget and resource limitations. I learned many things, some what to do and some what not to do. I know deep down that myself and my team gave 110 percent and that makes me very happy.

If someone came up to me tomorrow and said, “Hey, let’s shoot a 1920s Chicago film in 20 days with a small budget” I would probably smile, give it some careful consideration and say, “When do we get started”? MM