How They Did It: Erik Nelson’s Doc A Gray State Required a Descent into the Mind of Madness

David Crowley was a 25-year-old filmmaker in Apple Valley, Minnesota, when he began filming a project he called Gray State—creating the trailer for a feature film that at the time only existed in his fever dreams.

Gray State was to be an epic, bringing to life the worst fears of what might happen if the movement articulated by Alex Jones is correct, and the New World Order seizes final control of America: FEMA camps, street executions, mass round ups, and microchips forcibly implanted in innocent children’s arms. Crowley’s trailer is a shockingly powerful descent into a mad, dystopian world that millions of Americans have been convinced is just on our horizon. In this current fragmented paranoid culture of this country, if you can deliver on people’s worst fears, you’re going to get an audience. David Crowley steered right into that curve. Crowley released his trailer in 2012, and became a YouTube sensation. He secured financing to write a feature script, and ultimately in the summer of 2014, negotiated a Hollywood deal to further finance the production of his 30 million dollar epic.

But then, in January of 2015, just as he was on the brink of achieving all of his dreams, David Crowley, his wife Komel, and their five-year-old daughter were found shot to death in their Apple Valley home. When I read the brief news story, I sensed something powerful. I had long been scratching an itch on the soft white underbelly of right-wing fringe politics, and I also had been grappling with the powers of “selfie” delusion that comes from believing what you write and read on Facebook and Twitter. I had an immediate hunch that David Crowley was a hard-wired junction box between these worlds.

My hunch was confirmed the moment I went to Crowley’s Gray State YouTube page. All of his material was still there. I began to submerge myself into not only his trailer, but a seemingly endless series of behind-the-scenes videos he had filmed documenting the making of his epic. I instantly knew two things. One, this was a gifted filmmaker at work. Two, there was much much more out there that Crowley did not publicly post—footage that might ultimately solve a mystery that was being battened down by many conspiracy cultists who were (and still are) absolutely convinced that Crowley and his family were assassinated for getting “too close” to the truth. I also felt that the story of David Crowley could be a cautionary tale that would speak directly to the slow derangement of American politics and culture.

Timing, as they say, is everything

After a year of delicate negotiation with his family, I was able to obtain 23 terabytes of Crowley’s Gray State footage, the contents of his laptop and most importantly, all of his home videos and family pictures: 13,000 in all. But be careful for what you wish for. Now, I had to submerge myself into the method and madness of a murderer. I had been there before trying to grapple with the footage left behind by a doomed filmmaker with a death wish. 14 years ago, in the fall of 2003, I saw a CNN news alert about a man and his girlfriend who had been discovered dead in an Alaska wildlife preserve—their bodies ravaged by a rogue grizzly bear. The more I read about his story, and the more details I learned about the footage that Timothy Treadwell had left behind, the more I felt there was a documentary there. I shared my research with Werner Herzog, and he agreed. 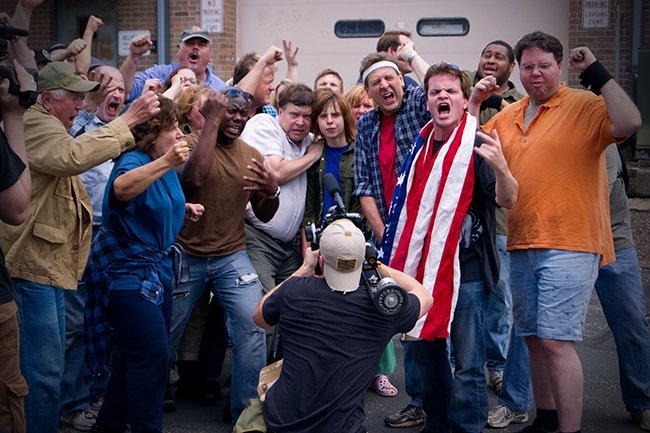 As we made Grizzly Man, Herzog and I would constantly try and second-guess Treadwell’s intentions and what he would have made of our project. Would he have objected to “his” footage being used in another filmmakers project? Would he have wanted some kind of last word? And always, how is it possible to respect a man, who, with a seeming death wish, coaxed his girlfriend into sharing his fate?

This internal debate was reflected in the final product, and the ambiguity of Herzog’s opinion towards Treadwell gives the film much of its power. But there is no comparing David Crowley with Timothy Treadwell. For all of Timothy Treadwell’s misguided eccentricities, he was not a killer. I had no idea of what might be waiting for me within Crowley’s hard drives, inside those terabytes.

It took three or four months for me to find out. As I went through the material, I started finding what Stanley Kubrick called “non-submersible units”—these things that were just so powerful that I knew you could pin a larger narrative upon them. Kubrick would not commit to making a movie until he was certain he had at least seven. I found a lot more. The trick was what to do with them.

I approached that editorial process almost as if writing a novel. I knew the end, but the road to that end was paved with these “non-submersible units.” It was a very organic process, but it required a massive amount of nervous screening and immersion into Crowley’s worldview—and subsequent madness.

In order to organize this chaos, I first created a simple two page outline, color coded in five categories. Our “hero” non-submersible units, the “produced” sequences that we had filmed, “thematic sections” that discussed the societal pressures that drove Crowley into madness, the “behind the scenes” footage that Crowley had documented as he made his film, and the “runners”, vivid scenes that we could come back to over and over in the film.

I had a difficult task to accomplish. But then, David Crowley made my job much easier. Two months into the process, we discovered the holy grail: a three hour, multi-camera interview Crowley had done, ostensibly to discuss his film project. In reality, this was an interview that laid bare his entire life’s story, and unintentionally illuminated the dark crucible that forged his madness. I no longer had to wonder what Crowley thought about his experiences in the Middle East, or his thoughts on the culture of conspiracy, or the depths of his paranoia; he was more than happy to tell me.

Looking back a year and a half later, I’m surprised to see how closely the final film resembles my first two page outline, as the film contains almost all of the material we had originally contemplated using. The power of this footage led to another key decision. Unlike Grizzly Man, which was powered by Werner Herzog’s existential debate with Treadwell over their respective views on nature, I knew I needed to remove myself from the proceedings, and let Crowley’s material— and his friends and family—speak for themselves. No narration, and an outwardly hands-off approach to the narrative filmmaking. I wanted to hide in plain sight, and hopefully, let the audience come to their own conclusion, if not solution, on what drove David Crowley into committing such a heinous crime.

I also asked all of my interviews to tell me what they knew, not what they thought. A story like this is a magnet for conjecture, and there had been far too much conjecture from people not privy to the raw data from Crowley’s files.

Of course, I knew there was another audience out there. This was the conspiracy culture that so fueled Crowley. If they give the film—or the case—any thought, they would be certain that I had created an absolute piece of compromised propaganda, engineered and created solely for disinformation. In essence, they would convince themselves that I was an agent of the New World Order, and that my entire film was a propagandistic hit job. My goal? To discredit David Crowley and his message, and cover the tracks of the “real killers.” The less I fueled this advance opinion by editorializing, or writing a narrative script that they could point to as proof of bias, the better. But I also knew that there was no way I can appease this particular audience, and I have not been disappointed in their virulent online reactions to the “Slopumentary” that I made. I imagine once they actually see the film, their reaction will be even more extreme.

For me, for many reasons, the most transparent way to tell this story, was to present the “units,” unfiltered, and straight up. If at the end of the film, the viewer doesn’t know what to think, feels conflicting and disturbing emotions towards the film’s protagonists, and is in some manner haunted by their viewing experience, I feel that my work has been done.

A Gray State opens in theaters in L.A. November 24, 2017, will premiere on A&E December 11, 2017, and is currently available on iTunes, courtesy of First Run Features and A&E IndieFilms.

Filling the Space You Leave: Joe Wright on Building Your Film Around Audience’s Emotions in Post-Production
"Let Actors Lose Themselves, But Give Them Love and Desire": Luca Guadagnino and Walter Fasano on Call Me By Your Name