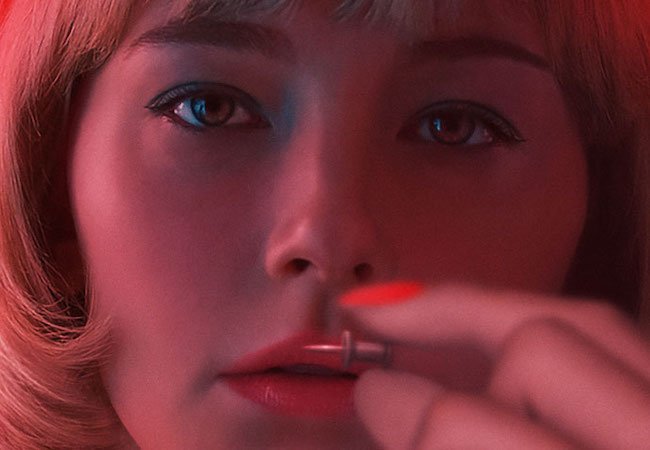 Swallow director Carlo Mirabella-Davis recalled his grandmother’s obsessive compulsive disorder to create his story of a pregnant housewife, played by Haley Bennett, who is compelled to eat inanimate objects.

“The film is inspired by my grandmother, who was a homemaker in the 1950s, in an unhappy marriage, who developed various rituals of control,” he told MovieMaker. “She was an obsessive hand washer. She would go through four bars of soap a day and twelve bottles of rubbing alcohol a week. I think she was looking for order in a life she felt increasingly powerless in.”

She was placed in a a mental institution where her so-called treatment included electroshock therapy, insulin shock therapy and a non-consensual lobotomy.

Also Read: For Hollywood on Lockdown, Time to Write That Screenplay

“I always felt that she was being punished in a way, for not living up to society’s expectations, of what they felt a wife and a mother should be, for being different. I wanted to make a film about that, but while I was working on it, I realized that hand washing is not very cinematic.”

Mirabella-Davis chose to give Bennett’s Swallow character, Hunter, a disorder called pica that creates an uncontrollable urge in some people to ingest dirt, ice and other dangerous objects.

“I remember seeing a photograph online of all the contents of someone’s stomach who had pica. All the objects that have been surgically removed. They’re all fanned out on the table like an archaeological dig. I was fascinated and I thought what drew the patient to those artifacts? It almost felt like a Holy Communion or something mystical and mysterious. I wanted to know more so that’s how it started,” he said.

Swallow — which Bennett said at the 2019 Tribeca Film Festival was dedicated to women and girls fighting to take control of their own bodies — is now available via video-on-demand. We talked to Mirabella-Davis about how he chose each of the objects Hunter eats, the curious opening of Swallow, and the four years in his twenties when he identified as a woman.

Shani Harris, MovieMaker: What is the meaning of each item that Hunter ingests? From the marble… to the thumbtack… to the soil?

Mirabella-Davis: I wanted each one of the objects to have a kind of emotional texture. To be like an emotional memory. You can hear when the moment with the marble happens. The distant sounds of birds, beach and people laughing. You hear waves crashing, and there’s something kind of nostalgic about a marble. It feels like a call back to perhaps an earlier time of happiness in her childhood.

There’s also something prismatic about marbles. Magical kind of like a talisman, so it seemed like the good first experience for her to have with the pica.

The thumbtack is more of a dangerous liaison. You can hear it whispering to her like a siren call. What we try to do is make each object have its own effect on Hunter. There’s a reason why she goes for each particular object. You can see in the micro calibrations on Haley’s face. She has incredible control over how expressive her eyes and her face is, so you can see the difference and each emotional experience that is occurring to her.

We also wanted an event to happen just before each moment of the compulsion that triggers it, and these are two experiences.

MM: What is the meaning of the lambs in the beginning?

Mirabella-Davis: As far as the lambs are concerned. I’ve always been intrigued by the idea of the Buñuelian opening, the opening that Luis Buñuel perfected, where you feel the theme of the movie in a brief parable in the beginning of the film. David Lynch does this really well in Blue Velvet, when the camera drifts down from suburbia into the dirt. You see all the bugs eating each other below. So this is kind of my version of that. We start out with the lambs in their pen together. We cut to Hunter packing and prepping for this dinner. We cut back and forth as the lambs are eventually slaughtered. The meal is prepared. We cut back to Hunter. She’s going to the meal and the two converge.

The idea was that it shows us that even though a meal could seem like a normal everyday experience, we’re familiar with it in this controlling patriarchal culture. There is this hidden violence. This hidden unseen oppression that is lurking. Hunter is like the lamb kind of being sacrificed by the family, or led to the slaughter. That was kind of the idea, and it also automatically set up where the movies going to go. And it lets you know, don’t get too comfortable. This film is going to be a little bit of a wild ride.

MM: Can you explain the use of the different colors in Swallow? What conversations did you have with the cinematographer about the overall look of the film?

Mirabella-Davis: I was very fortunate to work with this incredible design team, who did an unbelievable job. For example, Kate Arizmendi, my cinematographer, Erin Magill, my production designer and Liene Dobraja, my costume designer. There was a fantastic synergy between all of those departments. I have long been obsessed with color, meaning and symbolism. I love Hitchcock films and Brian De Palma films. Suspiria… is one of my favorite films and the colors in that are just phantasmagoric. Erin, my production designer, she’s very passionate about the idea that Hunter is decorating the house. So every object and piece of furniture in the house is an expression of Hunter’s psyche. In a lot of the spaces she’s decorating the house to reflect what she thinks her husband’s wealthy family wants.

Then Hunter’s true self emerges in these little bursts of color. Like the beautiful idea that Erin had of the red gel being put across the baby room’s window. It’s this little burst of danger and primal power that comes out. This was Kate… because Kate has an incredible sense of composition and how to elevate subtext through camera direction. We talked a lot about creating a rigid vernacular with off-camera direction. There were a strict set of rules that we would break at key emotional junctures. If you’ve noticed, Kate has a lot of lockdown master shots at the beginning of the film. This is where Hunter is sort of lost in the frame. But then Kate will suddenly use hand-held in the thumb tacks scene or suddenly use beautiful close-ups. Kate is so good at crafting these incredible potent and impactful close-ups. We’ll use them only in the moments when Hunter is bonding with the objects, that we want to be dialed into her experience.

And then Lienne Dobraja, the costume designer, she’s incredible. She worked closely together on Hunter’s look. You’ll see that Hunter wears a lot of bright colors initially and the house is very drab. As Hunter’s journey progressives, there is this thing that happens when you see her wardrobe journey change. The colors become less vibrant, but then she’ll have a breakthrough in therapy. Then suddenly she’ll be wearing a floral shirt. There’s a retro feel to every costume that Lienne did, which is really wonderful. It speaks to this old guard of the patriarchy that’s still lurking in the modern day.

MM: Did your past experience identifying as non-binary shape your understanding of Hunter in Swallow?

Mirabella-Davis: Definitely I’ve said in other interviews that in my twenties ,for four-and-a-half years, I identified as a woman. I wore women’s clothing. I had a different name. It was an incredibly wonderful time in my life. My gender has always been rather fluid. … It was a time where I really felt like I was connected with my creativity and with the world around me. It was also a real education too, because I was being raised as a man.

You don’t always see how big the cake of society that sexism is. Even just walking down the street was a real eye-opener. To see the way men and society in general are trying to constantly control and marginalize female-identified people. It definitely solidified a lot of my feminist beliefs. I would very much consider this a feminist film. Two-thirds of our cast and crew are women. All of our department heads are women. I’m so grateful that so many female artists decided to make my grandmother’s story their own.

Swallow, an IFC Films release directed by Carlo Mirabella-Davis and starring Haley Bennett, is available via video on demand.