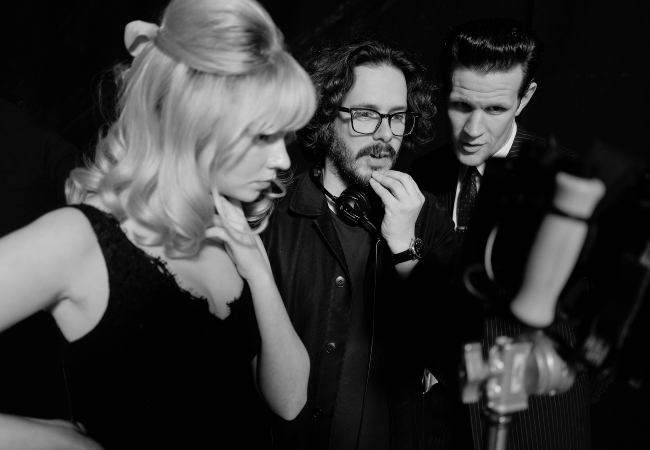 Wright’s split-period drama stars Thomasin McKenzie and Anya Taylor-Joy, following their twin storylines — one in the present day and one in the 1960s.

Death Proof explained that Pete Townshend almost joined the band, which would have made them Dave Dee, Dozy, Beaky, Mick, Tich & Pete. Here’s the scene:

Tarantino and Wright are big mutual admirers — Tarantino has called Wright’s 2004 film Shaun of the Dead “my favorite movie of that year.”

Also Read: No Time to Die Cinematographer Linus Sandgren on Finding the Soul of James Bond

Death Proof was part of Tarantino’s Grindhouse double feature with Robert Rodriguez, and Grindhouse featured fake film trailers by their friends – including Wright, who made a trailer for a film called Don’t that you can watch here:

Wright says he once commented on “Hold Tight” to Tarantino, which prompted the Once Upon a Time… in Hollywood director to play him another Dave Dee, Dozy, Beaky, Mick & Tich track. It was called — you guessed it — “Last Night in Soho.” Wright says Tarantino called the song “the best title music for a film that hasn’t been made.”

But when Tarantino learned that Wright was using the title for his movie, he informed Wright that Sugar Town director Allison Anders, who also directed episodes of Sex and the City, The L Word, and Orange Is the New Black, had actually been the first to call “Last Night in Soho” the best title music for a film that hadn’t been made. So both Tarantino and Anders are thanked in the Soho credits.

To sum up Last Night in Soho in only a few words, Wright boils it down to a “cautionary tale about nostalgia.”

“It’s the problem of nostalgia that nostalgia generally tends to romanticize the past,” Wright tells MovieMaker Magazine in our latest issue, out soon.. “And I think, you know, obviously the ‘60s is a decade that’s probably the most-discussed decade of the 20th century, and probably one of the most romanticized ones as well. … It’s a cautionary tale about nostalgia itself: If you could go back, should you go back? That’s essentially what the film is.”

Last Night In Soho hits theaters on Oct. 29. The full version of this story can be found in our fall print issue, on newsstands Oct. 15.

Beyond Fest Responds to the Pandemic with 31 Free Screenings — A Mix of World, U.S. and West Coast Premieres
The Guilty Cinematographer Maz Makhani on Shooting with Three ARRI ALEXA LFs in One Location