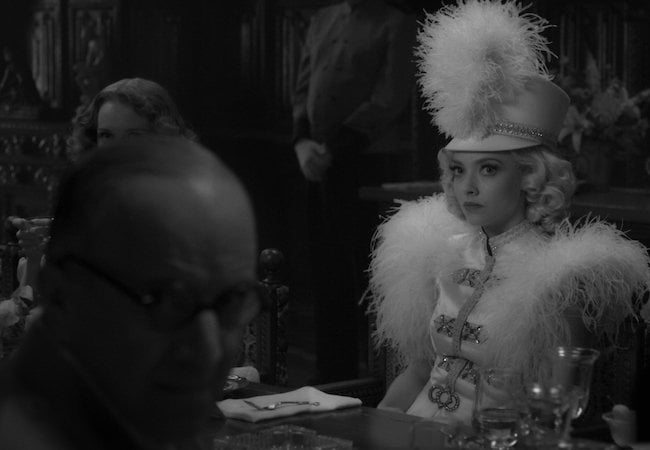 Production designer Don Burt’s biggest challenge in David Fincher’s Mank was recreating the opulent home of William Randolph Hearst. He could have driven four hours from Los Angeles to San Simeon and taken a tour of Hearst Castle, which remains a popular tourist attraction.
But he didn’t.
“I was afraid with some of the budget constraints and so forth, that I’d get up there and I’d be overwhelmed. And I think it’d be impossible to pull off,” Burt says in the latest MovieMaker podcast. “So I just sort of took it another way.”
That other way was to work with set decorator Jan Pascale to tell a story with no extraneous details. As Burt and Fincher explain on the podcast, they didn’t want audiences to see ostentatious displays that might distract from the story — despite the countless expensive displays in Hearst’s home.
“Don was exactly right to say, ‘we’re going to need to weed this back a little bit.’ Otherwise, people just aren’t going to know where to look. And they’re not going to know where the floral arrangement ends and the brocade jacket begins,” says Fincher. “And you know that it could be — especially with deep focus photography — just exhausting for your eyes.”
You can listen to the full interview on Apple or Spotify or Google or above.
Hearst Castle was an especially important set because Herman J. Mankiewicz (Gary Oldman) has some of his most pivotal moments there. He forms a kind of emotional alliance with Hearst’s girlfriend, Marion Davies (Amanda Seyfried), while strolling the grounds, and later suffers a drunken breakdown in Hearst’s dining hall. The film dramatizes how Hearst came to inspire Charles Foster Kane in Mank’s script for Citizen Kane.
Fincher says he left almost all of the decisions about Hearst Castle to Burt, and mostly weighed in on matters of framing and blocking.

Mank (Gary Oldman) in a drunken moment at Hearst Castle in Mank.

“Any choice that I involved myself in, and they were minimal in that set, were all about, like, ‘He’s going to be entering from the left, he’s going to be looking right, that’s the fireplace where he’s going to light a cigarette.’ So it was much more of a schematic: ‘Here’s where this action is going to take place.'”
Burt quickly ruled out trying to match the actual home.
“We’re not just dressing San Simeon to look like it’s extravagant,” Burt says. “There’s purposefulness to the tapestries. There’s purposefulness to the different elements, and knowing when to be subtractive.”
What did he subtract?
“I said, there’s no way I’ll be able to do walls that look like they were disassembled monasteries in Spain that were shipped over. … I came across research photos of this character, Hearst, and his servants, with these massive amounts of crates on the ground that they were unpacking, of antiquities, of Renaissance paintings, and sculptures and all these all these artifacts that he gathered in Europe and brought back. And I just realized, oh, my gosh, you know, like, I could never do that.'”
Burt relied in large part on black and white photos from the 1930s, including for the outdoor night scenes.
“We did base it on what the real space was like, what the real dining hall was like,” he says. “And we took several different rooms that we found in research and we said, well, let’s have a seating area that looks like this. Let’s bring in a piano. Actually I think the piano was David’s idea, because he wanted Charlie Chaplin to play the piano. ”
Also Read: Gary Oldman, 24 Years Sober, May Have Noticed Some Things You Didn’t About Mank
Fincher and Burt have worked together since 2007’s Zodiac, including on The Curious Case of Benjamin Button (for which Burt won an Oscar), The Social Network, The Girl With the Dragon Tattoo, Gone Girl, and House of Cards.
Mank had a relatively tight schedule — about 12 weeks — and a budget estimated at around $25 million. The film is nominated for 10 Oscars, the most of any film this year, including for Best Picture, Best Director and Best Production Design for Burt and Pascale.
Was Mank their most challenging collaboration?
“There’s this tendency… especially during award season, for everybody to talk about how incredibly difficult it is,” Fincher laughs. “Listen: Movies are hard. They’re all hard, and it’s the same amount of hard… if you have $100 million to spend, it’s only because you need $120. If you have 25 to spend, it’s only because you asked for 30.”
Mank is now streaming on Netflix.
Main image: Amanda Seyfried at Hearst Castle in San Simeon, as envisioned by Mank production designer Don Burt. Photos courtesy of Netflix.

How Mank Production Designer Don Burt Recreated Hearst Castle Without Visiting It
400,000 Children Are Starving in Yemen. The People to Blame Want to Hide It From You