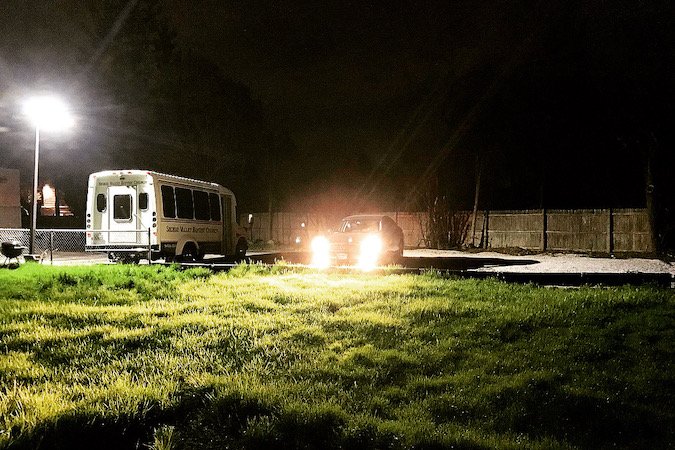 Daniel Talbott is a writer, director and actor whose credits include The Conners and The Mist. In this essay, he talks about the death of his friend, journalist Patti Bosworth, and how it helped inspire him and his brother to make the short film “Light” while in quarantine, using Roger Corman’s approach to filmmaking.

I made a promise to myself when I started out working in theater, television, and film: If I went swimming in the Pacific and a shark took off both my legs, I would try to spend my last moments dreaming of my family and trying to create.

If I had an iPhone, GoPro, or anything with a camera, I’d turn it on, start to shoot, and hope a brilliant editor like Morgan Halsey could make narrative sense and a film out of it. Maybe I could posthumously get it on FilmFreeway, so it could be shared in a dark theater as part of a wonderful film festival like Oxford, Omaha, Nantucket, Rhode Island or Sun Valley.

We’ve been on lockdown for over eight weeks. Who knows when we’ll be able to go back into production, back into rooms, back into theaters. A new normal is taking shape, but a promise is infinite.

Also Read: How One Man Made a Rambo Movie at Home for $96

Homebound in our apartment in Los Angeles, my wife and son and I are definitely keeping busy. I’m finishing a new feature. (If The Double Life of Veronique and Call Me by Your Name made love, I hope this screenplay would be their baby). My wife is writing like a madwoman. And we’re all watching movies, Criterion Collection and TCM addicts that we are. We can’t watch, smoke or inject enough Billy Wilder, Jean Arthur, Agnès Varda, or Claire Denis.

Then my friend Patti Bosworth dies of COVID-19 in New York City. This woman was and is a fucking inferno of work, life, creativity. She’s the avid story collector who broke the ice with Marilyn Monroe by asking about her gigantic “Emperor Hirohito of Japan” pearls.

Crying doesn’t seem right. I do cry, but it’s completely inadequate as a way to remember or honor her. So I go back to work. “Work,” she said, and Chekhov says, and I believe – is pure, and it’s the only way. 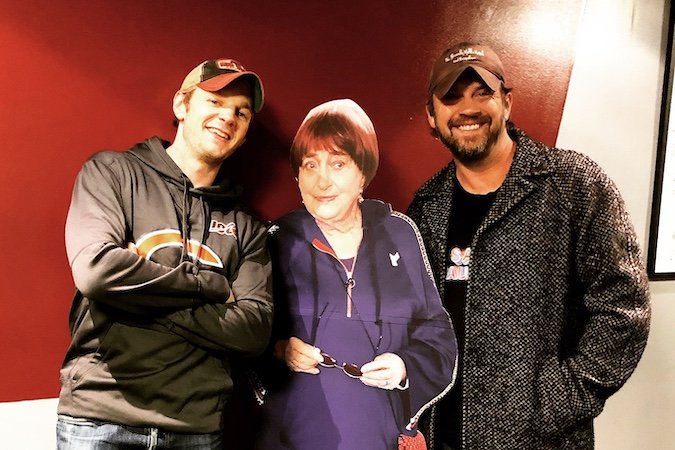 Will Pullen and Daniel Talbott pose with a cardboard cutout of Agnes Varda. Main image: An exterior shot from Light.

I call my brother Will first and tell him about Patti. I talk to my wife, my sisters Lucy and Sam, and I call Estelle Parsons.  The whole time I’m thinking, “We shall work without rest for others, both now and when we are old.” I don’t know why Uncle Vanya is in my head, probably because of Estelle’s Vanya at the Actors Studio and how much Patti loved both Estelle and her production of it.

I read an article about Roger Corman and his “first and hopefully last” Corman Quarantine Film Festival. That’s it. Patti would love this. She’d laugh, glint mischievously, and say something like, “Get your ass to work, Dan.”

I call my brother again. We’re going to make a short film, Roger Corman-style. I’ve never met Roger Corman and he has no idea I’m alive, but I love his approach to filmmaking and thank the gods he’s on this planet. The only thing in the way of you making a film is your own lack of imagination or ingenuity. There’s always a way.

My brother Will’s in Chicago and we’re in L.A. I get to work on a script.

It’s a character study of internalized homophobia and toxic masculinity. I can’t stop thinking about Log Cabin Republicans. Kathryn Bigelow says, “Those of us who work in the arts know that depiction is not endorsement.” I love that and start digging in the sand. I’m not interested in a mouthpiece for my political beliefs and bents. I want to write and shoot a complicated, nasty, verbal, vulnerable, confession. A confession that takes place in the parking lot of a Baptist Church outside of Chicago, in a car, in almost a single take.

My wife Addie and our friend Chris Bellant come on to help us produce it. We have almost zero budget. We have an iPhone, a beat-to-shit car, an extension cord and a few house lamps. We have Chicago and my brother Will, who’s an extraordinary actor. This whole thing will be an experiment, an ode to Roger Corman, and a prayer to Patti.

The four of us workshop the script on Zoom. We scout locations and storyboard shots on Facetime.

We shoot the master in the driveway of my brother’s place in Wilmette. A pissed-off neighbor calls the cops. Can’t be a Roger Corman film without cops. They’re great about it and think we’re bonkers.

Chris gets his friend Shane Howard to help us edit in exchange for a dinner at Musso and Franks when we can all go sit in restaurants together again. My friend Kip Kroeger from The Conners writes and says he’ll help us finish post. The amazing Melanie Addington introduces us to MovieMaker so they’ll run this piece. The whole film is shot and will be made in the end through family, friends, handshakes, hugs, future dinners, and a little money thrown in to help cover folks’ costs.

Film is always possible; it’s infinite in its possibilities. Commercial film can be wonderful, a restaurant in this wonderful country of many. If you’re starving though, and for whatever reason the commercial restaurants won’t or can’t let you in — find a restaurant that will let you in, or learn to grow your own food and make your own dishes, and invite everyone over to eat together.

We’re heading to post and I can’t wait to share this little, imperfect, but well-loved beast with others. I keep thinking of Patti and her whispering to us all, “I wish you a kinder sea.”