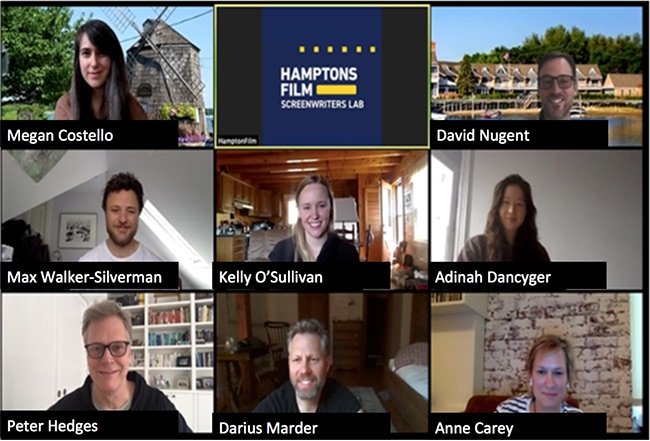 David Nugent, artistic director HamptonsFilm, explains in the piece below how the non-profit film organization moved its illustrious Screenwriters Lab online in the face of COVID-19.

Back in early March, just as the COVID-19 pandemic began to evolve into the crisis that has now turned the world upside down, we at HamptonsFilm started to worry about how this virus could impact the upcoming 20th edition of our Screenwriters Lab.

After the five-day Film Festival we annually host in October, our Screenwriters Lab is our second-largest operation. Each year, we receive hundreds of screenplays from around the world, and with the help of a team of dedicated readers, my colleague Megan Costello and I select the three strongest projects to participate in the Lab. This year’s class of fellows & projects included Adinah Dancyger’s Gracefully, Kelly O’Sullivan’s Mouse, and Max Walker-Silverman’s Esther’s Guide to Sex and Death, and the plan was to travel these screenwriters out to the East End of Long Island in early April, and pair them up with three established writers, directors, and creative producers for a weekend of one-on-one development mentorship.

What our festival (or any film festival of a certain size) can lack in intimacy, with over 150 screenings and events taking place, is where our Screenwriters Lab excels. Over the course of the weekend, we have breakfast, lunch and dinner together, and include other members of the artistic community of the East End as well as board and advisory board members to join us at evening events.

We invite the public to a Master Class in Screenwriting, where esteemed writers, such as last year’s guests Tamara Jenkins and Jim Taylor, discuss their celebrated careers. Board members generously invite us into their homes for networking cocktail events, and last year, our co-chairman, Alec Baldwin, hosted an intimate welcome dinner for the fellows and mentors. For a long weekend, a small group of artists get to know one another, share notes and concerns, and support one another.

Though we were initially optimistic that we would be able to host at least some guests — perhaps through a slightly modified version of the Lab — the looming global health crisis suddenly escalated in ways we could never have anticipated. Along with the rest of the film world, we looked on in disbelief as SXSW, Tribeca, and many other beloved festivals and institutions cancelled or postponed their events. Next, one of our mentors felt they could no longer take the risk to fly in from Los Angeles, and then we discovered that two of our selected fellows would also be based outside of New York. Hotels, restaurants, and event spaces began to close — including the ones where our Lab would generally take place.

After close consultation with our ace problem-solving executive director Anne Chaisson, it soon became clear that we would need a contingency plan, and we faced the decision to either postpone or cancel the Lab entirely, or to explore the possibility of hosting it virtually using something called “Zoom,” which I was in no way familiar with at the time. We reached out to all of our fellows and mentors to gauge their familiarity with these video-conferencing platforms, and to determine their interest in joining us in this online experiment. We would miss out on the beauty and seclusion of leaving our “regular” lives behind and decamping to the Hamptons to focus solely on work. But this seemed like the only viable option. To our immense relief, all of the participants agreed to give this a try.

The first evening of the Lab arrived, and our introductory meeting, which would typically take place over cocktails & hors d’oeuvres, was now a Zoom call. To set the scene, Megan and I changed our virtual backgrounds to that of the hotel where we typically host the Lab in Sag Harbor. I’m not sure if it made things better or worse to show the writers the fireplace by the water, where we usually gather around at this time. But it felt like the right thing to do.

First, we all checked in to say where we were “broadcasting” from. A few people were in NYC, one was in a log cabin in Kentucky, one in the mountains of Telluride, and one was in Western Massachusetts.I was in our house in Amagansett. We shared how we were feeling, given the pandemic, where we were self-isolating and why, and the itinerary for the weekend ahead of us. Though meeting people for the first time in a virtual setting was an unusual experience, I was heartened to see that everyone seemed really keen on connecting with their fellow artists, and appeared grateful for both new faces and a distraction from everything going on around us.

The following day, the mentors and fellows spent hours working with one another over a variety of different online platforms, and later that evening, in order to make up for some of the informational networking events could not take place in person, we organized an “Industry Happy Hour” with two wonderful members of our Advisory Board Dan Steinman (co-president and COO of 30West) and Michael H. Weber (Oscar-nominated co-writer of  The Disaster Artist, 500 Days of Summer, and The Spectacular Now), and Liz Hannah (writer and co-producer of The Post and the writer of Long Shot.

I had prepared questions for them about their careers and advice, then planned to turn the questions over to our fellows, but it seemed that the issue of the virus’ effect on the industry loomed over everything at the moment, from the stories people may want to see told, to what could possibly get financed, to even how films would be seen when we get to the other side of this.

Thus, we spent 45 minutes sharing how COVID-19 had affected each of our corners of the film world, from the viewpoint of producers, financiers, a lawyer and two working screenwriters. While a degree of fear naturally informed these discussions, everyone saw hope in the role that artists can play in moving ourselves forward with new stories and new ways to tell them.

On the final day of our virtual edition of the Lab, the fellows and mentors shared a concluding one-on-one session, before we came together to discuss each project as a group. As we all gathered together for this final Zoom call, an incredible feeling of solidarity and hope permeated the session. Even though we were separated by thousands of miles and different time zones, it became clear that the passion of artists will thrive whenever and however we see ourselves out of this pandemic.

We yearn for connection with one another, and to find ways to support the next group of artists who will tell our tales. And while this year’s Lab may have been assisted by the wonders of technology, what really drove it was everyone’s commitment to both their craft and each other. We are one of a number of arts organizations whose primary mission may be sharing films with our local audiences, but who also work hard and take pride in supporting artists at varying stages of their career.

And while producing this year’s 20th edition of our Screenwriters Lab presented challenges we’d never imagined, we wanted to share how we were able to make it happen in the hopes of reminding all of the storytellers that where there’s a will, there’s often a way.