House of Gucci Saves Time by Cutting Out Some Guccis 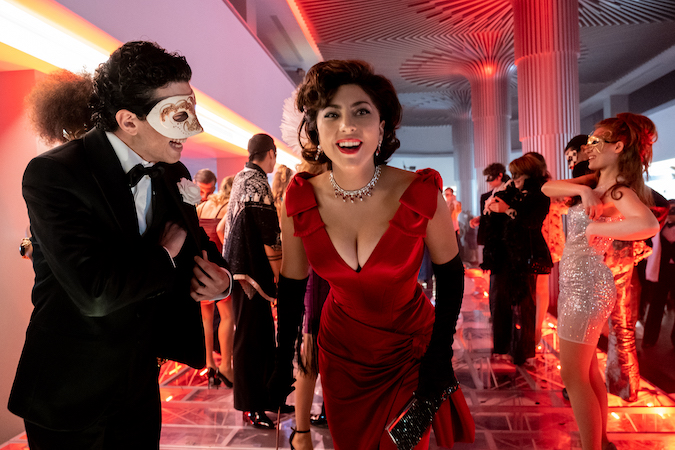 House of Gucci is a glorious, sprawling story of family rivalry, tracking the shifting plots and alliances of Aldo Gucci (Al Pacino) and his son Paolo Gucci (Jared Leto), as well as Aldo’s brother Rodolfo Gucci (Jeremy Irons) and his son Maurizio (Adam Driver). It’s a complex, twisty movie, but the real story is far, far more intricate and messy.

Because in truth, Aldo Gucci didn’t have just one son — he had three.

Two of Aldo Gucci’s sons, Giorgio Gucci and Roberto Gucci, are nowhere in sight in the film, even through they, like Paolo and Maurizio, shared stakes in the revered luxury brand. It’s said that writing is all about killing your darlings, and screenwriter Roberto Bentivegna made the rather ruthless — but cinematically rewarding — decision to keep the action focused on cousins Paolo Gucci and Maurizio Gucci.

Bentivegna notes that he cut out several members of the family in the name of moving the plot along. In addition to cutting Giorgio and Roberto Gucci, he also gave Maurizio one daughter instead of two. He stands by his decisions.

“I was actually reading a review this morning by this lady who was like, ‘Why weren’t there two daughters instead of one?’ And she was sort of picking out all the the inconsistencies between the real story and the script,” he told MovieMaker. “Like, lady, it’s called screenwriting. It’s called dramatizing. It’s called taking liberty. You just have to to put all that stuff aside and just service the story and be like, Okay, what am I trying to get out of this, and what’s going to be the most effective choice that you make, in order to tell the story that you want to that you want to tell?

He adds: “There was so many balls in the air. There’s so many characters that I had to just make that choice of really selecting what I wanted to put in the script, which is tough. But yeah, I think it’s important to understand the difference between the fictional story that we’re telling, and obviously the true events that transpired.”

In House of Gucci, the exhaustive book by Sara Gay Forden on which the film House of Gucci is based, Paolo and Maurizio have by far the most fascinating arcs of the third generation of Gucci. (The company was created by Guccio Gucci, who had six children, including Aldo and Rodolfo. Aldo built Gucci into an empire, while Rodolfo, a former actor, made crucial contributions to its reputation for elegance.)

Also Read: Jared Leto Came Up With That Urination Scene in House of Gucci, Writer Says

In the film, the divide between the two sides of the family is fairly simple: The two brothers, Aldo and Rodolfo, each own half of the company. Paolo and Maurizio can expect to inherit their respective fathers’ shares so long as they stay in their good graces. (Spoiler warning: They don’t.)

Some early online reactions have called House of Gucci a “mess,” and these reviews are wrong — in fact, House of Gucci is an elegantly simplified version of the absolutely bonkers, ridiculously complicated and confusing events that occurred in real life. Rather than making a mess of reality, the House of Gucci filmmakers, led by director Ridley Scott, have wittily pared down a 544-page book that itself did a virtuosic job of detailing  decades of sloppy interfamily conflict.

While the film focuses on the rebellion of Maurizio and Paolo Gucci, but in reality, Giorgio was the first of his generation of Guccis to rebel against the family business. Forden writes that Giorgio “infuriated both his father and his uncle Rodolfo in 1969 when he decided to open his own shop, Gucci Boutique,” which catered to a younger clientele than the main Gucci business did at the time. Aldo called him “the black sheep in the family. He has left the cruise ship for a rowboat, but he will be back!”

He eventually was brought back into the fold, and several relatives competing to replace him as black sheep.

As Forden explains in her book, through a series of deaths and other tragedies, by the mid-1970s Aldo and Rodolfo became the sole stockholders of the company. Aldo chose to split some of his shares between his three sons, giving 3.3 percent each to Giorgio, Paolo and Roberto.

As Forden writes, “He acted as a generous and fair father, not concerned that he had given away his power to command. Any one of his sons could now ally with Rodolfo to create a 53.3 percent majority at a family board meeting.”

The following years involved endless machinations in which one Gucci or another tried to form cross-family alliances to outwit one another. Things boiled over — one of many times they would boil over — at a 1982 board meeting in which Paolo demanded access to company records, then pulled out a tape recorder to capture his relatives’ responses.

Forden writes that Giorgio lunged for the tape recorder, Aldo ran around the table toward Paolo, Maurizio grabbed Aldo in a headlock for fear Paolo would attack Aldo and Giorgio, and Paolo fled through a Gucci store, bleeding and shouting at customers, “Just look! This is what happens at a Gucci board meeting! They tried to kill me!”

Of course, you won’t see Adam Driver trapped Jared Leto in a headlock to protect Al Pacino in House of Gucci — because Giorgio Gucci, the part-Gucci owner who set off the violent series of events, isn’t in House of Gucci.

Rather than play up violence and drama, House of Gucci is the rare Hollywood film that opts out of including an outrageous, show-stopping fight scene, in favor of servicing the overall story.

And what of Roberto Gucci, the other son of Aldo, barely even mentioned up until this point? He was never in contention to be the black sheep of the Gucci family. According to Forden, Paolo nicknamed him “Il Prete” or “The Priest” because he was so obedient and respectful toward their parents. He became a family man with six children and maintained a relatively low-profile.

You can check out our full interview with Roberto Bentivegna on Apple or Spotify or here.

House of Gucci is now in theaters.

The Humans: This Screenwriting Aide Unexpectedly Led Writer-Director Stephen Karam to Funding
Watch Paul McCartney Improvise ‘Get Back’ in Peter Jackson’s Get Back