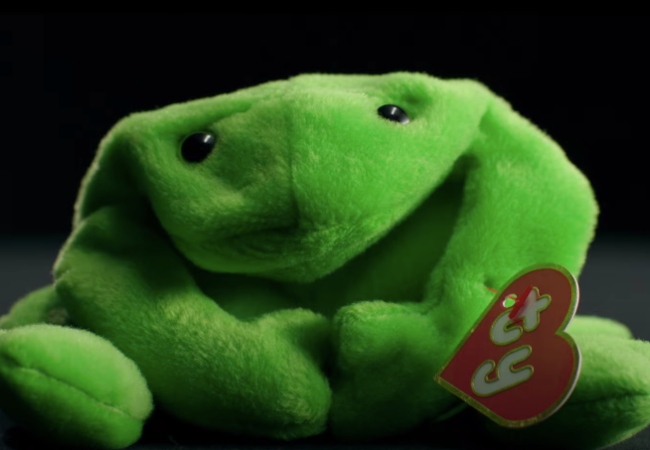 If you were a child in the 1990s or early 2000s, you probably had them — those soft, squishy, lovable, pocket-sized stuffed animals with sympathetic eyes. Now lining consignment stores and filling up boxes in the attic, original Ty brand Beanie Babies were once valued for thousands of dollars apiece. Beanie Mania, the new HBO Max documentary about the Beanie Baby craze of the 1990s, investigates the swell, and eventual pop, of the Beanie Baby bubble. Plus, director Yemisi Brookes thought that now was a pretty good time for some pre-pandemic cuddly toy nostalgia.

“During the pandemic, everyone sort of wanted a bit of something which felt a bit good, and I think there’s a lot of nice nostalgia associated with that period of time,” Brookes told MovieMaker. “That was pre-9/11, pre-pandemic, and it felt quite nice to go back to a safer, nicer, happier place when the biggest worry was are you going to be able to complete your Beanie Baby collection?”

But Beanie Mania delves far deeper than the surface-level cuddly qualities of the beloved children’s toys and into the fascinating origins of how the craze began. Today, a quick eBay search will reveal that some of the rarest Beanies are still going for tens of thousands — if you believe the hype.

“Collectively, the American public is optimistic that those Tupperware bins [full of Beanie Babies] that they’ve got still might be worth something, and there is this idea that maybe they might come back or that they might be able to fetch a large amount of money,” Brookes said. “We have heard of false sales happening where collectors decide to sell them back and forth for super high amounts of money just to make it look like they’re moving. They might not necessarily be — that might not be happening. So you have to be careful.”

Which is to say, if you see an original Beanie Baby listed for $80,000 on eBay, don’t blow your life savings.

But the fact that any secondary market for Beanies still exists at all does harken back to a time when people were offered that much money and more for complete Beanie Baby collections.

“The collective insanity that happened around it, and people kicking and screaming and pushing people over to be able to get this soft toy, that was pretty nuts,” Brookes said. “The amount of money that people would be willing to pay [was] in the thousands. I mean, as part of the film, Mary Beth Sobolewski talks about, in quite a cavalier way, that at one point in the mid-90s, she was offered $100,000 for some Beanie Babies, and she said, no,” Brookes added. “We really thought twice about whether to include that detail because, actually, we had heard of people that were offered far more.”

Beanie Mania zeroes in on the group of Chicago-based women who, like Sobolewski — who at one time was making a living off of the Beanie Baby craze, including her monthly magazine Mary Beth’s Bean Bag World — played a role in the consumer hype that skyrocketed the price of Beanies on the secondary market.

“It’s interesting to me, understanding the role that those women played in pushing the secondary market which in turn pushed the primary market, and it’s just this handful of housewives or soccer moms who, because of their meticulous cataloging and their meticulous collecting, really created this phenomenon which I just don’t think is really documented,” Brookes said. “I think when we talk about Beanie Babies, we talk about Ty Warner who is like the elusive founder, and we talk about the kind of mania, but we don’t really talk about all those hours of invisible labor that these women put into it really just for the love of it, but that really did create this economic bubble.”

Another secret ingredient to the success of Beanie Babies was founder Ty Warner’s refusal to ever sell Beanie Babies to large chain retailers like Toys R Us.

“He just wanted to sell to the mom-and-pop stores or hospital gift shops or stationery shops. And so what that actually meant was you couldn’t just go to a Walmart and just get 20 off the shelf. You had to be out in your community driving around,” she said. “It really became like a bit of a treasure hunt.”

But perhaps the most essential element to the Beanie Babies craze was its coexistence with the earliest days of the Internet.

“AOL chat rooms started popping up, which meant that you could go into an AOL chat room which was made specifically for Beanie Babies and talk to people in other parts of the country. So you were able to trade a little bit further and wider than you might have been able to do before. And then just after that, eBay popped up, so that secondary market really kind of grew and grew through eBay,” she said.

Even now, Beanie Babies still have that nostalgic charm.

“Beanie Babies still do bring joy, and that’s really nice,” Brookes said. “It was a real moment in time for these women who I think a lot of people had just considered to be quote-unquote soccer moms. And yet, here they were collecting something that they love and having a lot of fun doing it.”

Jockey Writers Clint Bentley and Greg Kwedar on What Goes Into a Healthy Writing Partnership
What Actually Happened to Morpheus and Zion in The Matrix Resurrections?