To Make Greyhound, Director Aaron Schneider Merged The Practical World and an Imagined One 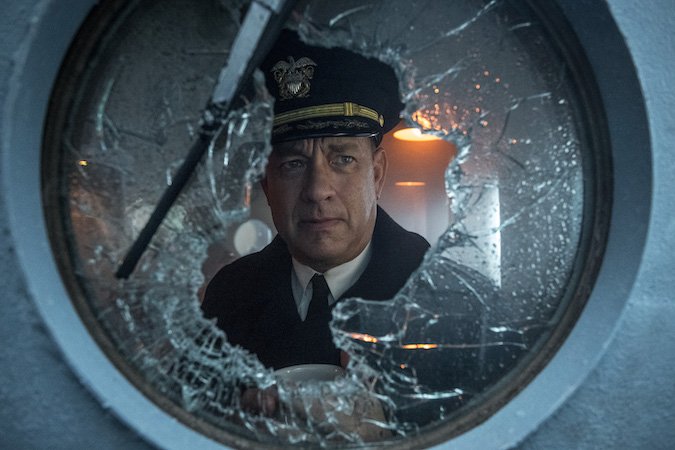 In this feature, Greyhound director Aaron Schneider goes over how essential it was for him to make a robust battle plan in the development/pre-production stages of his “at sea” WWII epic.

Development and pre-production: that period on a project when the sky’s the limit. As a kid, I loved a good creative project. Mine always seemed to revolve around my favorite TV shows and movies; I built Star Trek phasers in my basement workshop, a Ghostbusters Terror Dog from plasticine, and I can remember teaming up with my next door neighbor to dig a Hogan’s Heroes tunnel under my backyard. We started out strong, but when our parents shut us down for dubious engineering, it took us twice as long to fill the hole back in than it did to dig it. In the parlance of Greyhound, we had no battle plan. And if moviemaking has taught me anything over the years since digging myself into that hole, it’s this: Creative and design battles are won or lost in the planning stages.

Greyhound had all of the typical prep challenges and seemed to invent a few of its own. For starters, the story takes place entirely at sea, and of course, the WWII ships that still exist are too old to sail (I looked into it). Our seafaring flick would have to be shot on dry land, which put even more pressure on the level of photorealism in our visual effects. Digital water is second only to digital humans in its level of difficulty, and water has its own paradox. The closer you get to realism, the harder realism is to achieve.

We also had a relatively modest VFX budget and 35 days to shoot an action-filled war drama, so where to begin? I started by reminding myself daily that I was there to tell a great story. A big part of prep is keeping your passions stoked, and after all, the story is the reason I took the gig, right? Well, okay: that and the opportunity to work with Tom Hanks on his passion project.

Greyhound came into my life in late 2016 after a three-hour sit-down with Tom. Seated amongst a half-dozen miniseries Emmys he and his partner Gary Goetzman had won, we chatted about filmmaking and what inspired us about our favorite films. I lobbied him for stories about the directors and cinematographers he’d worked with, many of whom were my heroes coming up as a cinematographer. As we talked, Tom did amazing impersonations of the directors he’s worked with. His Penny Marshall is spot on and full of affection. Eastwood? Well, you can imagine. But I’m not sure Zemeckis would want to hear his, and I definitely don’t want to hear mine.

Eventually, the conversation turned to Greyhound, and his excitement became infectious. You might think Tom Hanks has done it all, and you’d be almost right, but we all harbor cinematic dreams not yet realized. Greyhound was his baby, and I knew exactly how that felt.

The excitement of birthing something personal was a big part of how my directing career began. After building a successful career as a DP, I adapted and shot the William Faulkner short story, “Two Soldiers,” in hopes of steering my cinematography career toward writing and directing. I had no idea where the effort would take me, and I threw my entire life savings into it. Before it was over, my bank balance had dropped to post-collegiate levels, but in the end, I got to take my mom to the Oscars and share my win for Best Live Action Short with her. (The rest of my family had to slum it up in the nosebleeds). 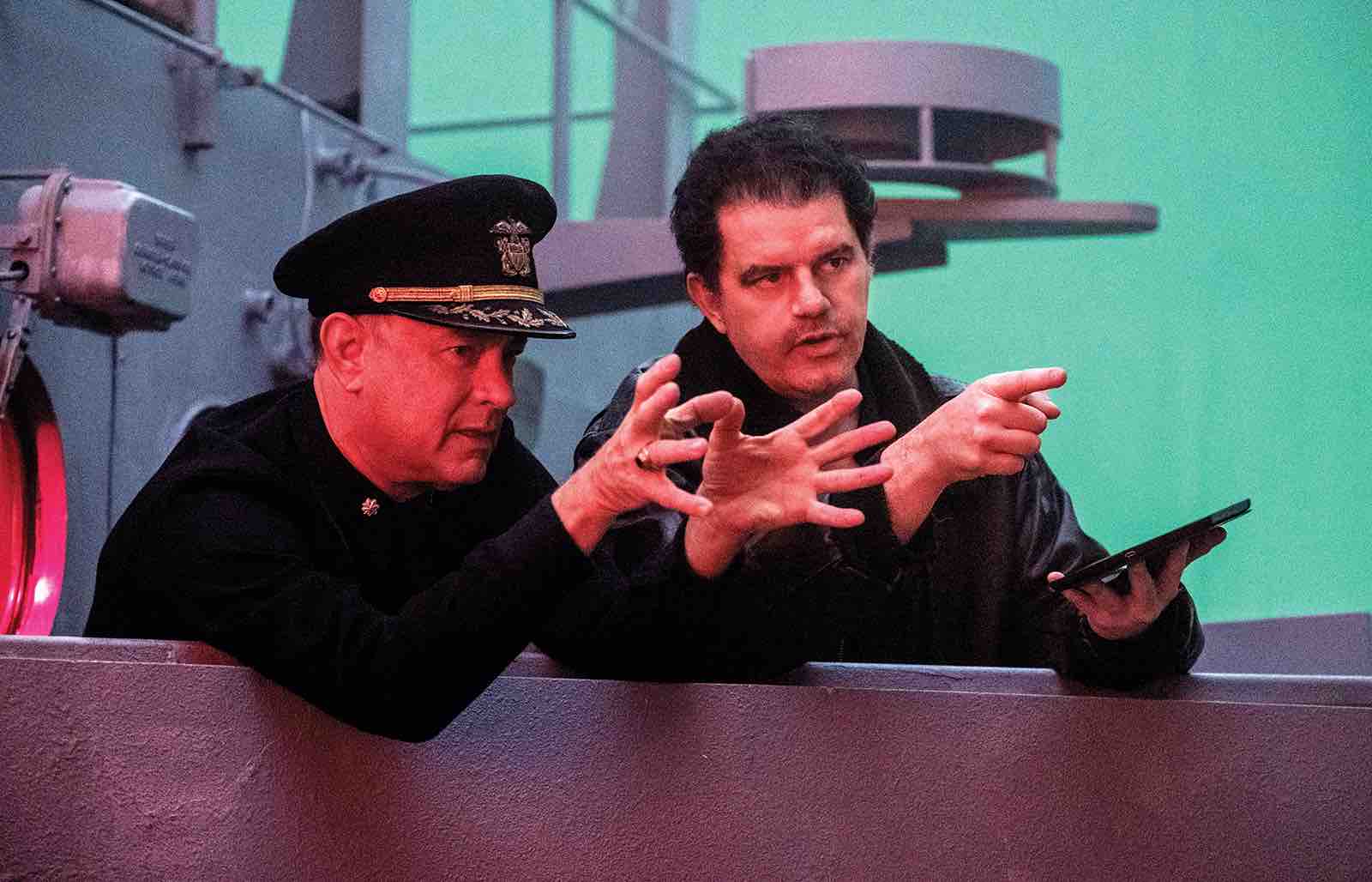 But before any potential reward, there is only the unknown, the dream and the excitement of creating something personal. Having felt all those things making “Two Soldiers,” I recognized them in Tom, and I wanted to help him succeed.

My first efforts were in helping prepare the screenplay that Tom had so carefully crafted. As a director I once shot for used to say, “You can’t thread a script through a projector.” For every idea on the page, a director needs a solid visual approach for expressing it. The human drama in Greyhound lived in-between and underneath the words. The naval jargon was there to lend a heightened veracity, so it was Tom’s performance and inner-life as Commander Ernest Krause that would connect the audience to the film emotionally. Emotion comes from empathy, and empathy comes from understanding, so I felt it was crucial that the audience understood every tactical dilemma Krause was facing — or nothing Tom was capable of expressing would resonate. No less critical would be helping Tom to build a performance from virtual battles.

As a thought experiment, imagine you’re a director tasked with shooting an actor playing a quarterback in a film wherein the field, the stadium and every other player will be created as visual effects in post. How do you go about shooting the quarterback’s coverage without first understanding the offensive play? The script might describe the snap, the long throw to the receiver and his dive into the end zone — Tom’s screenplay described these types of key story points vividly — but no script can place every player on the field or every ship on the ocean. Now imagine that our 90-minute football movie takes place on a single football field and that every quarter will involve virtual players running virtual plays. So what do the director and actor need to do to render a performance at the center of a “virtual” narrative?

On Day One, Tom was going to be staring out a portal window, asking me where his receivers were and where to throw the ball. Not only did I need answers for him — I also needed an effective means of communicating them. 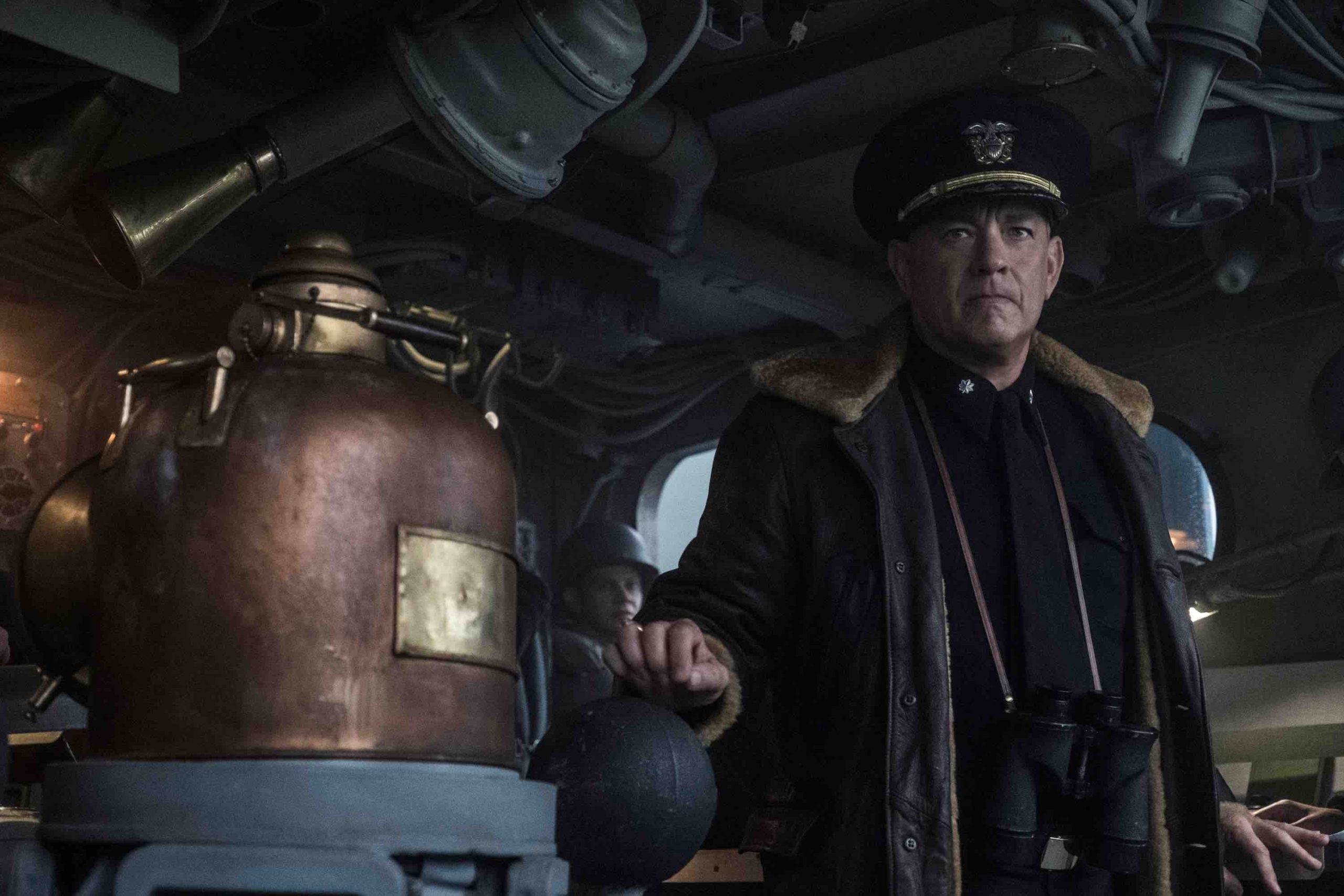 To bring that virtual world to life, we turned to the C.S. Forrester novel upon which the film is based. Forrester had done his homework — his naval dialogue wasn’t just window dressing. By extracting the extra information detailed in the novel, we were able to plot each tactical event onto naval maps and bring them to life using “pre-vis” – the computer-aided design stage that assists filmmakers in pre-visualizing ideas for lighting, camera, and shot design.

To maximize our pre-vis budget, we assembled our own in-house team freelance computer-artists working in Autodesk’s Maya, the industry standard application for animation and CG effects. The naval maps corresponding to each sequence were loaded into Maya and used as templates for creating bird’s-eye animations of the battles. By animating them at true nautical speeds and accurate distances, we could ensure that our choreography adhered to real-world physics. The overhead animations would become the visuals I needed to bring the virtual world into the production world for everyone to see. Huddling up around my iPad, Tom and others would be able to understand the events taking place around them. All Tom would need now were some LED markers for key positions and timing. With his mind’s eye and imagination full, he could now concentrate on building a fully nuanced performance.