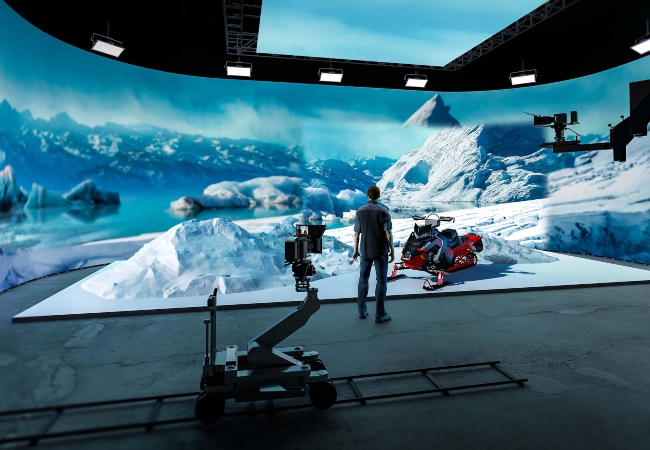 Opening for student use in early 2022, the virtual production studio will use Unreal Engine, a program originally used to create real-time 3D environments in video games. The unique technology allows students to use both computer graphics and live-action footage to create and render digital environments that look like real-life locations for use in film, television, and other media projects.

The 40 foot-wide, 16 foot-tall LED wall, made up of 500 LED panels with a 2.8mm pixel-pitch, creates a digital background that actors can perform scenes in front of as if they were walking through a real-life location, when in reality, they will be standing on a stage. This will allow student filmmakers to shoot virtually in any location they can dream up at any time of day or night, from iconic landmarks to interplanetary landscapes.

Full Sail is among some of the first universities to begin using this technology in educational settings. Savannah College of Art and Design recently began operating its own virtual XR stage for student use.

Full Sail’s new facility will allow its students to practice using a technology that is currently being incorporated into Hollywood film sets, including Disney+’s The Mandalorian.

“As companies move to increasingly adopt virtual and augmented reality technology, Full Sail University continues to prove itself a national frontrunner by providing businesses with the talent necessary to drive innovation,” said Orlando economic partnership president and CEO Tim Giuliani. “With this new studio, Full Sail sets the stage to position its students to meet the future demand for content and applications developed specifically for virtual reality technologies.”

The project will cost the school more than $3 million to build and will give students the opportunity to collaborate with each other across different majors and areas of study. The virtual production studio will be primarily used by Full Sail’s School of Television & Film, but students within the gaming and art degree programs will also be able to create content and environments using Unreal Engine.

“We knew this was the next logical step in our 40+ year investment in technology,” said Rick Ramsey, education director of visual arts at Full Sail University. “One of the most unique aspects of our new facility will be its 18 ft straight center section allowing us to accommodate game engine environments, as well as high-resolution video environments, providing expanded creative use. This singular feature change will give the Full Sail virtual production studio more accurate and cleaner visual representation for the camera. Virtual production is where the industry is headed, and we are proud to bring the future of the entertainment industry to our students today.”

Main Image: A mockup of what the virtual production studio will look like, courtesy of Full Sail University.