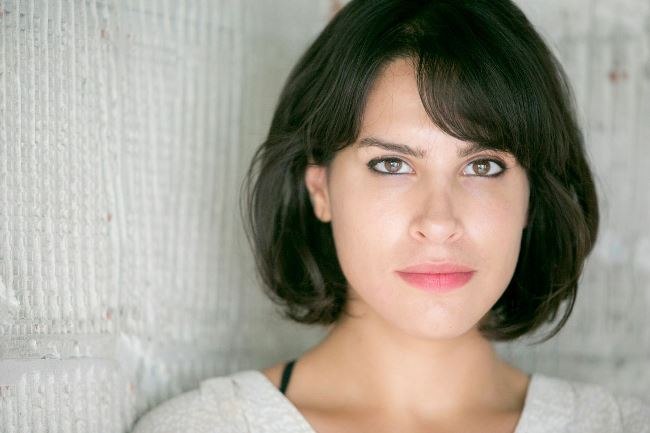 Desiree Akhavan hates it when she’s compared to Lena Dunham. This is no dis on the creator of HBO’s Girls—indeed, Akhavan goes out of her way to express admiration for the strong, feminist comedic voice Dunham has brought to the screen.

What the 30-year-old writer-actor-director finds so frustrating is that journalists can’t seem to mention her work without the comparison, as if there in only room enough in New York for one smart, funny female filmmaker who’s willing to candidly (and often hilariously) confront modern sexuality.

Akhavan has her own story to tell, as a bisexual Iranian-American who only came out to her parents a few months before the completion of her first feature (also her Tisch thesis project), Appropriate Behavior. A native New Yorker, Akhavan earned her B.A. from Smith College before entering NYU’s grad film program. There she co-created an acclaimed web series, The Slope, where she played one half of a pair of homophobic, slacker lesbians. It was a lo-fi, irreverently chatty series that limited its run to 16 episodes, and attracted the support Akhavan needed for her feature debut.

Taking on triple duty as the writer, director and star of Appropriate Behavior, she charts the misadventures of Shirin, a needy Brooklynite who makes a series of increasingly unwise, impulsive decisions after her girlfriend dumps her. Between entering a misbegotten menage a trois both graphic and hilarious, coming out to her strict Iranian parents, and teaching a filmmaking class to five year-olds, Shirin is a charming yet hopelessly neurotic creation.

At last year’s Sundance Film Festival, where Appropriate Behavior had its debut, buzz was good. So good, in fact, that Lena Dunham later requested to see the film. This led to a series of meetings and the eventual announcement that, lo and behold, Akhavan had been cast in Girl‘s upcoming fourth season. Oh, the irony.

Still, lest anyone feel inclined to further the comparisons between the two, Akhavan’s directorial debut makes clear that she is very much her own person. Effortlessly funny, she displays the same disarming sincerity that makes Appropriate Behavior, with its comic fearlessness and frank sexuality, so engaging.

Desiree Akhavan (DA): I don’t know if I’d go that far. I like to say “tragic comedy.” Like Louis C.K., something that walks the line between farcical and comedic. I had my thesis review a few weeks before Sundance 2014. The two male professors in the room were like, “I love how self-deprecating that comedy is, it’s so funny.” And the female professor said, “I don’t think it’s self deprecating at all. To me the protagonist owned every moment and every desire she had. And even when it was going the wrong way, she was fully in it.” And I like that comment a lot.

MM: There has been a fair amount of discussion about the merits of film school.

DA: I had classmates who felt they didn’t get enough out of it, but it was vital for me. It’s a very personal thing. I needed that structure. I needed a safe place to fail. And I failed a lot there. I was not “one to look out for.” I was not the star of my class.

MM: When you say you failed, what do you mean?

DA: I made shitty films that didn’t go to festivals. I made a short film that I spent a year obsessing over and crafting and killing myself over, fitting a square peg into a round hole. The whole time I was trying so hard to be an auteur. And I failed. And it was kind of the best experience I could have had. I submitted my first short to 30 film festivals and it got rejected by all but two of the smallest ones. [laughs] I flew to Florida. It was the first time I had ever been to a film festival and I brought my mom and we spent so much money to fly ourselves out there. And it was really depressing. Every screening had like five or six people in these huge theaters. During our shorts block screening, it was full and I became really excited. And right after the short that played before mine—we were the last short in a block of three hours—the entire audience left except for eight people.

It was four o’clock on a Saturday, and there was a celebrity judge. She was the woman who played Mother Winslow in Family Matters [Rosetta LeNoire]. She was very kind but we didn’t speak because I was too busy crying. I remember the guy who was doing the sound stopping me as I was leaving, and he was like, “Wait, have you said hello to Mother Winslow? You gotta network with her, you gotta give her your card.” I couldn’t believe I’d ever make anything that went anywhere; I couldn’t imagine giving her my pathetic little card.

MM: What filmmakers do you look at and say, “That’s the kind of work I want to do?”

DA: Sarah Polley. Her work is so honest and beautifully executed and heartfelt. Our styles are so different. I’m a fan of things that I couldn’t do myself. I really love Andrea Arnold.

MM: What makes comedy work or fail on screen?

DA: I like comedies that walk the fine line with tragedy and humor. I love Muriel’s Wedding, I watched that film so many times growing up, it was my anthem. It deals with a serious subject matter but it’s so silly. I think Noah Baumbach films are really funny. But I also grew up watching Mel Brooks. Comedy is accessible on so many different levels because it depends on taste and it depends on genre. Right now we live in a world that has a Louis C.K. but it also has… I’m trying to think of who’s a modern Mel Brooks-style comedian.

DA: Yeah, with a Will Ferrell and a Louis C.K. Both their work is valid but it’s completely different.

MM: I have a theory that romantic comedies tend to have characters that behave a bit like psychopaths.

DA: I think the process of being in love and falling in love and falling out of love does makes you a psychopath. You try to keep it in the realm of reality but sometimes the best romantic comedies are goofy and ridiculous. Who fakes an orgasm in a coffee shop? Yet that scene is classic and so well-executed. And it’s a great film.

MM: How long was the Appropriate Behavior shoot?

DA: We shot for 18 days in Brooklyn. I had a great team that understood that since I was starring in the film, I demanded a calm set. I didn’t want to feel frantic or pushed. You make compromises accordingly; you adjust your shot list, locations, and company moves according to that. I didn’t want to be running around, moving. I really wanted to shoot within my means.

MM: What was the casting process?

DA: I worked with a casting director named Allison Twardziak. We sat down, and she took me on Facebook at first. She was like, “I think this person, this person, this person,” and she basically handed me the cast that I ended up going with. I felt like she knew this world and she had lived in this world. And some of them were non-actors who she felt would fit into these roles, who were spot-on. She never wanted caricatures, she never wanted anything over the top. We both wanted to keep both feet on the ground in execution; to keep reinforcing, “Don’t do comedy here. Keep both feet there. Let’s set this in the real world.”

MM: What was it like for you to balance being the director while having to be the main character in your own film?

DA: After the first or second day, I understood the workflow a lot better. When you’re in a scene, you have access to your cast, and where the emotions are lying, in a way you can’t when you’re not in the scene. Our communication was heightened, I think, because of it. On the other hand, as an actor, I was able to be as vulnerable and emotional as I possibly could. And that was because I was in a position of power. I knew I would have control over this footage. I knew I was shaping a performance. As an actor, I don’t know if I would have been able to have that much trust if it had been a different director. So I’m really grateful I did it. I don’t see it as a conflict of interest.

I don’t know when the next project would be that I would do that again on. My next feature script doesn’t involve a character my age at all. So it’s not something I would have to do. It’s also about surrounding yourself with people you trust. I love trusting people to be good at their jobs. Christopher Teague, our cinematographer, is incredibly talented. He studied writing and directing and he’s so knowledgeable and all his images enhance the story. My producer, Cecilia Frugiuele, she’s a storyteller as well. She would watch the monitor and I knew I could look at her and say, “Can we move on?” if I was feeling a little insecure.

MM: Sex scenes are hard, and they take a lot of trust. But in this case, you’re trusting yourself.

DA: I was ready for it. That was a really big element of this story. I wasn’t particularly happy with a lot of the sex scenes I’d been seeing. I felt inspired by others: I really love the film Fat Girl by Catherine Breillat. There’s several sex scenes in that film. I really wanted to explore the subtle power shifts during sex and have something that wasn’t one-note, because I find that sex scenes in films are either good or bad. Awkward or silky-smooth. There’s no gray area. I want to follow someone’s train of thought and do it a little subtly.

MM: What advice would you give to someone shooting a sex scene?

DA: That you should be communicating something at all times. I think a good example of this is the sex scene in Lust, Caution. Those are really long, graphic sex scenes and yet they are so beautifully executed and romantic and, I guess, titillating, if that’s the word, but never gratuitous. And so much about those characters and their dynamic is being told in those scenes.

MM: How did you ride the line between being honest and being titillating?

DA: I trusted Chris [Teague] to know where the camera needed to be when we were choreographing, because it was my ass on the line, literally and figuratively. I wanted to create a dynamic that was believable and not gratuitously graphic. So we went through the movements at half-pace, not actually going for it, but [figuring out] how we’d like to be with clothes on. And then when it was time to go, we just did it. And we did them until we felt we had it.

MM: I have seen titillating narratives.

DA: Well, titillating to what degree? If you’re doing your job of having a convincing romantic moment, that inevitably will be a little titillating. The line is with being gratuitous. I’ve thought about this a lot. Once you stop communicating story or character, you’re just jacking off. MM

Appropriate Behavior opens in theaters and on VOD on January 16, 2015, courtesy of Gravitas Ventures. This interview appears, in shortened form, in MovieMaker‘s Winter 2015 issue.