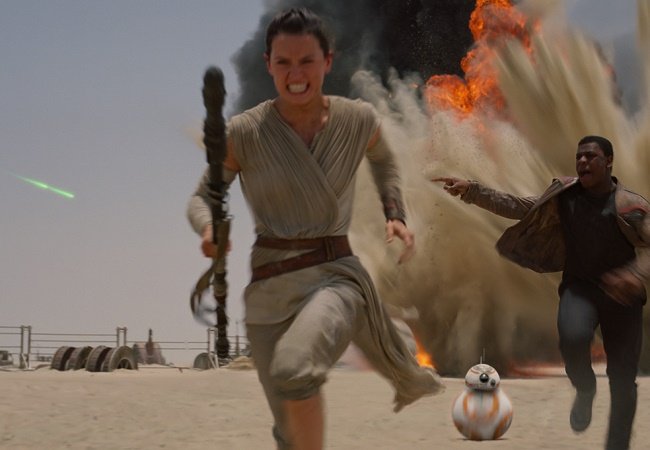 “We have killed him—you and I. All of us are his murderers. But how did we do this? How could we drink up the sea?” — Friedrich Nietzsche, The Gay Science

Claiming that The Hero’s Journey is dead just after the opening weekend of Star Wars: The Force Awakens may seem a bit foolish. How could anyone question a worldwide phenomenon worth uncounted billions? The Hero’s Journey, as articulated by Joseph Campbell, has been canonized both financially, as a corporate business plan, and creatively, as the very definition of Story. Even as I begin this post, I can smell the hate mail brewing. But understand that I’m not challenging Star Wars itself or the mythologies it echoes, but rather the simplistic template that screenwriters use in an attempt to emulate its success. Even as we continue to celebrate the Monomyth in screenwriting classes and story meetings as the master beat-sheet for movies and television, our actual stories cast it aside.

I think you already know this. You watched the Hero die when Ned Stark put his head on the chopping block, and you watched him die again when Rob Stark was ambushed at the Red Wedding. Game of Thrones is a story not of unity and growth, but of multiplicity and chaos, in which a crowd of supporting archetypes—the Wicked Queen, the Wise Dwarf, the Fair Princess—all orbit the black hole left by the hero’s absence.

I maintain that “the Main Character” and “the Hero” are no longer synonymous, and perhaps never were. Insofar as the archetype does appear in our stories, the Hero is often not center stage. Take Mad Max: Fury Road. While the main character in the script and film is Max, he is not the Hero; that archetype is embodied by Furiosa. She’s the one who goes through all the traditional stops of the hero’s journey, and she does it as a supporting character. The main character, Max, is what Campbell would call a “Helper,” someone who assists the hero on her journey. Structurally speaking, it’s as if the Wizard of Oz were told from the point of view of the Scarecrow.

As another example, the Showtime series Homeland is not a story about the Hero either; it’s about the woman who foils the Hero’s plots. Carrie Mathison is not Odysseus sailing home from war; she is Circe thwarting his progress. She’s not Hector defending the walls of Troy; she’s Cassandra making prophecies no one will believe. She’s not Theseus slaying the Minotaur; she’s the Delphic Oracle driven mad by her visions. When the other would-be heroes of Homeland challenge Carrie, they don’t face the club of Hercules but rather the flashing gray eyes of Athena. Very, very different archetypes than the Hero are at work here. Carrie is a chorus of complex myths.

I’ll go so far as to claim that we don’t even identify with the Hero. Or rather, we identify with far more than just heroes. We are also villains, with dark urges to tear, rend, torture and burn. Our psyches are jam-packed with identities: mentors and tricksters, blacksmiths and chambermaids, sad queens and wicked children, femmes fatales and stylish pimps. To understand ourselves and tell our authentic stories, we must listen to each of these inner voices equally. The Hero likes to believe he is “the One,” but he is just one among a multitude.

That’s why, in Orange is the New Black, the ostensible “hero” seems like such an insufferable narcissist, and we endure her journey only to follow the myriad supporting characters. Each of these other women has a vivid story to tell — a story that has everyone trapped in the “belly of the whale.” To call every character with a story a “hero” is to forget what the Hero Archetype really is.

Remember Walter White’s Hero’s Journey? His monstrous inflation of ego that resulted in the bloody murder of innocent men, women and children?

I think you know this already, but the thousand faces of the Hero are often masks for the Herculean Ego—inflated, shallow and vain. He sees himself as the center of the universe, the Son of God, the One. No matter what happens at each signpost of the The Hero ‘s Journey, no matter what other characters or stories populate his world, it’s all about him. While it may be nice to have this type of conceited blowhard on our side when we’re sacking a city or slaying a monster, we don’t have to let him rule us.

Yes, any aspiring writer must read The Hero With a Thousand Faces, because its insights are timeless. But try reading James Hillman’s The Dream and the Underworld as well. Hillman argues against the “Herculean Hero/Ego.” Rather than seeking unity, balance and the One, as the Hero does in the Monomyth, Hillman argues that the imagination, especially in dreams, seeks diversity and fertile chaos.

What Hillman says of “the Dream” can be said of the Story. “We can no longer turn to [the Story] in hopes of progress, transformation and rebirth.”(41) Authentic stories “make no attempt at achieving undivided individuality or…unified wholeness.” (41) Our characters are not single, heroic egos, but a complex “multiplicity of forms.”(41) And only by recognizing this plurality can we reach our story’s potentials. The story, like the dream, “works through destruction, [a] dissolving, decomposing, detaching, and disintegrating process.” (27) It is meant, not to cure our symptoms, but to interrupt our structured templates so that we may engage with our lives more deeply. To identify with the Herculean Ego, is to take the hero archetype literally, instead of seeing it as just one metaphor among an endless variety.

If we take Hillman’s perspective, The Hero’s Journey has an Apollonian structure: ordered, balanced, idealized, unified and monotheistic. It’s just the sort of rational and predictable action plan that will appeal to anyone with a business degree and a share in box office receipts. Yet our best stories recognize other gods besides Apollo, especially Dionysus and Aphrodite, who rampage over our index cards and outlines and who seize our fragile egos with ecstasy, inspiration and insight. Hillman suggests that the imagination, and the stories that delight it, are polytheistic.

But alas, Hollywood loves Monomyths and Herculean Egos. I tried to write a Hercules movie myself once—a Hercules who subverted the Greek myth of the Hero, a Hercules with doubts, fears and divided goals, a Hercules who winced at pain, avoided conflict and resented the role he was born to fulfill. After reading the script, Brett Ratner told me I had made Hercules too metrosexual. He chirped, “Hercules needs to be badass,” and then moved on to a rival project. Renny Harlin had a similar take and rewrote my script top to bottom to infuse it with Gladiator-style badassery and 300-style action. As it turned out, audiences, for the most part, jeered both movies.

To be fair, audiences wouldn’t have liked my version either. Hercules is a hard nut to crack. That’s why the only authentic embodiment of the Hercules myth in all of cinema is Jack Torrance (Jack Nicholson, The Shining). Or did you forget that Hercules, hero of heroes, murdered his wife and children in a drunken fit of madness? Disney forgot too.

So, in challenging the Monomyth, I am not forgetting mythology but turning back to look at it more closely. The sanitized Monomyth tends to cover up the violence, horror and perversity of myths. In the original version of Sleeping Beauty, Prince Charming rapes the princess while she is unconscious, and she awakens nine months later with twins suckling her fingertips. Then, Prince Charming, who is already married, burns his wife alive so he and Sleeping Beauty can live happily ever after. As I’ve argued before, real myths are weird, from Gilgamesh to Jar Jar Binks.

Yes, when they are all taken together in the mythical–symbolic equivalent of a statistical average, you get a Monomyth, but it is precisely the way each of these particular tales diverge from the norm that determines whether they succeed or fail.  Joseph Campbell made a deep, lifelong study of myths in all their peculiar variety. Too many writers skip over the myths themselves, and go straight to the template, confusing the map with the territory.

And did we ever really love the Hero? Really? George Lucas, Lord of the Hero’s Journey, never understood that we secretly hated Luke and his quest for self-actualization and personal growth—and we hated Anakin even more. We loved the supporting characters; they were the reason we bought all the toys. We loved Han most of all, because he was full of grit, wile and contradiction. He was the archetypal “Helper,” “Rogue” and sometimes “Mentor,” who was just as likely to delightfully thwart our expectations as he was to fulfill them.

(Here I’d tell you what I love about Rey and Finn, but… no spoilers.)

In truth, what we love about the Star Wars movies—the good ones—is the inventive and chaotic multiplicity of characters and their quirky, charismatic individuality. If the Hero’s Journey template was all it took to thrill us, then The Phantom Menace would be considered ideal and The Empire Strikes Back deeply flawed.

What I’m arguing is that while Joseph Campbell’s work remains classic, and the Monomyth remains a powerful insight, to recognize story only in terms of one abstract schema is to ignore both the idiosyncrasy of ancient myths and the complexity of contemporary cinema and television. As writers, we become like Freud and his Oedipus Complex—seeing all of human experience through a single, narrow lens. Yes, “the hero” can be so vaguely defined as to cover any main character with a problem to solve, but why limit ourselves to this single model?

So, my advice to aspiring movie and TV scribes is this: As you go on your Writer’s Journey with plans to Save the Cat and Steal Fire from the Gods, remember that now, as it was in the beginning, stories are polytheistic, myths are myriad, and dreams are pluralities without center —and no one master myth can contain these multitudes. Instead of laying out index cards in the ordered slots of the Monomyth, consider beginning your story at the Hero’s wake, when all the wives, witches and wild women, and all the sailors, suitors and sons, find voices of their own. MM

Sean Hood is a Hollywood screenwriter best known for horror films (Halloween: Resurrection, Masters of Horror) and swords-and-sandals pictures (Conan The Barbarian, Hercules: The Legend Begins). He is currently teaching at USC’s School of Cinematic Arts, blogging at genrehacks.com, and writing upcoming projects for film and television.

First Draft: What a Screenwriter Learned Directing Her First Feature, Smartass
First Draft: Seven Things to Check Off Before Submitting a Screenplay