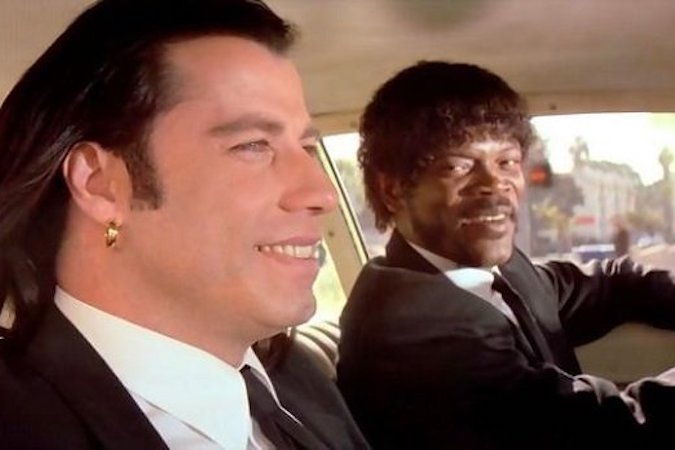 Ridley Scott is right that most superhero movies are bad, but is otherwise wrong; Quentin Tarantino enters a legal Battle Royale with Cheese over NFTs; a book about David Fincher explains his bold Zodiac casting; and the Ghostbusters reunite. All in today’s Movie News Rundown.

Peloton Movie Reviews: Here’s an extremely professional new video series in which I review movies while riding a Peloton, based on how motivational they are for riding a Peloton. Today’s movie: Shang-Chi and the Legend of the Ten Rings.

Ridley Scott Is Right: The 83-year-old House of Gucci director is getting lots of attention and predictable blowback for his obvious statement in a Deadline interview that many superhero movies are “fucking boring as shit.” Before you say, “Isn’t this just how older established directors have to get publicity nowadays?” please bear in mind that he is correct. And I say this as someone who loves superhero movies. Scott elaborates: “Their scripts are not any fucking good. I think I’ve done three great scripted superhero movies. One would be Alien with Sigourney Weaver. One would be fucking Gladiator, and one would be Harrison Ford [in Blade Runner].”

Ridley Scott Is Wrong: May I continue to editorialize? I respectfully disagree with his assertion that superhero movies are “mostly saved by special effects,” and would argue that many otherwise good superhero movies, from Wonder Woman to (almost) Shang-Chi, suffer in the third act because of the needless introduction of a CGI menace and a boring pixel fight “climax” in which we have no emotional stakes. (Shang-Chi fortunately recovers from its dull foray into the CGI Zone, as I get into in Peloton Movie Reviews.)

Spider-Man: No Way Home Trailer: As you may have heard, there’s a new Spider-trailer. Here’s hoping the new film proves the exception to Ridley Scott’s rule.

Mister President: Our friends at New Filmmakers Los Angeles recently hosted a celebration of LGBTQ+ filmmakers that included stories of a father and son trying to bond, a journey on a very deadly route, and a cat named Mister President. You can watch interviews with the filmmakers here.

Quentin Tarantino’s NFTs: Quentin Tarantino, the last person I would ever expect to have anything to do with NFTs, is getting sued by Miramax over his plans to auction off NFTs (non-fungible tokens) related to his 1994 hit Pulp Fiction. They NFTs will include “scanned digital copies of handwritten script pages for uncut versions of scenes from the film, with audio commentary and other elements,” according to The Associated Press. Here is where you can line up to buy the “original, handwritten screenplay of the iconic ‘Royale with Cheese’ scene.” I’m not going to pretend to understand how to use crypto currency or exactly what NFTs are and I’m excited for the solar flare that will make all of this an amusing memory. Also, while we’re sort of on the subject, Crypto.com Arena is a horrible, horrible name.

Whoa: The algorithm gods just served me up this thing I’ve never before seen where Tarantino explains the difference between Chevy Chase and Bill Murray movies and wow. It’s good.

Just Call It the Ray Parker Jr. Arena: Picture this. It’s 1984 and you’re a highly respected R&B singer-songwriter-guitarist who is approached to make a song about a bunch of guys who trap ghosts. You listen attentively, write down a few details (“Ectoplasm, mm-hmm. Demon dog, got it, go on…”) And you then you make a song that not only adeptly summarizes this ridiculous idea, but also make it stone-cold sexy. If anyone deserves to have an arena named after them, it’s Ray Parker Jr.

Main image: John Travolta and Samuel L. Jackson discuss the Royale With Cheese in our wonderful pre-crypto past in Pulp Fiction, courtesy of Miramax — please don’t sue us.