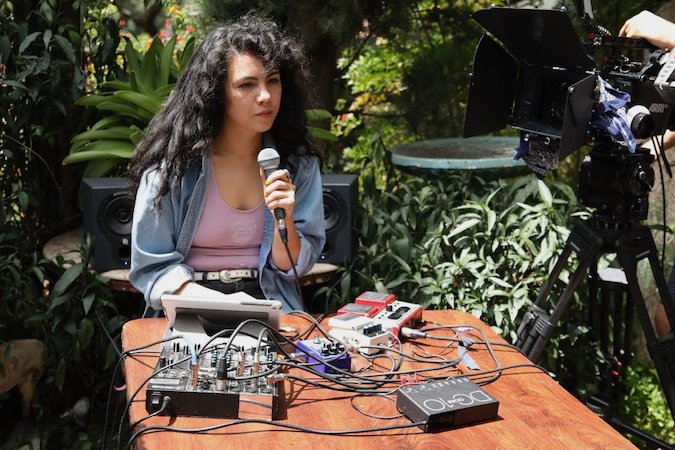 Jonathan Davies’ film Topology of Sirens is a very unusual cinematic debut, in that it’s a true debut: Davies didn’t make his first feature after years of honing his craft through shorts.

Nonetheless, he clearly knows what he’s doing. The film was announced today in the international competition section of the International Film Festival Marseille, or FIDM.

There are a host of reasons filmmakers usually start with shorts: the financial stakes are lower. There is more room for error. And a short can be a calling card or a way of raising money: The Climb from Michael Covino was first a 2017 Sundance short, and Jim Cummings’ Thunder Road was a SXSW award-winning-short film.

Davies made his debut with the support from the Omnes Films collective, which he formed with fellow Emerson College alums and other moviemakers from the Boston area.

Omnes Films is able to fund features by shooting on shoestring budgets. “It’s definitely safe to say that many short films made every year have double or triple the budget of our features,” Ham on Rye director and Omnes Films co-founder Tyler Taormina tells MovieMaker. Taormina points to meticulous planning in pre-production from the entire Omnes team as key to successfully producing feature films on a micro-budget.

While directing shorts allows filmmakers to learn the craft as well as the ins and outs of navigating a hectic film set, it’s important to note that the storytelling present in a short film is often markedly different than what is possible in a feature film. Short films often employ hyper-efficient, Hemingway-esque storytelling with no throwaway lines or shots. With a longer runtime, a filmmaker can let a narrative breathe.

“I just never had any dreams or ideas that would fit in short form. It was a feature or nothing, really,” says Davies.

Topology of Sirens joins good company in the international competition section of FIDMarseille, with new films from American moviemakers Ted Fendt and Ben Russell. The international competition jury is headed by Filipino moviemaker Lav Diaz, who knows a thing or two about feature films that breathe, with runtimes that are frequently in the four-to-five hour ranges. FIDMarseille also announced a retrospective and masterclass from acclaimed auteur Apichatpong Weerasethakul.

Topology of Sirens follows Cas (moviemaker and film programmer Courtney Stephens), as she investigates the origins of microcassettes she discovers in an old hurdy-gurdy. The supporting cast includes experimental musicians like Sarah Davachi, Whitney Johnson, Micaela Tobin (pictured above), and Ben Boye.

“I asked them basically just to play themselves in the movie,” Davies says. “Courtney was a perfect fit for the role. Being a non-fiction filmmaker herself, she was in a great position to coax conversation out of non-professional actors onscreen.”

Also read: How The Girlfriend Experience Used Deepfake Technology for Its Season 3 Finale

Topology of Sirens also has an unexpected influence outside of music. “Almost every single aspect in the movie, from the story down to the props, was conceived of in terms of its relation to classic point-and-click adventure games like The Secret of Monkey Island and Myst,” Davies says.

Watch the Topology of Sirens teaser premiere below and check out the full FIDMarseille lineup here.

Main image (above): Micaela Tobin on the set of Topology of Sirens, directed by Jonathan Davies. Photo by Brandon Lavoie.

Omnes Films is currently in development on their third feature, Eephus, a meditative baseball film, directed by Carson Lund, who served as the cinematographer for both Ham on Rye and Topology of Sirens.