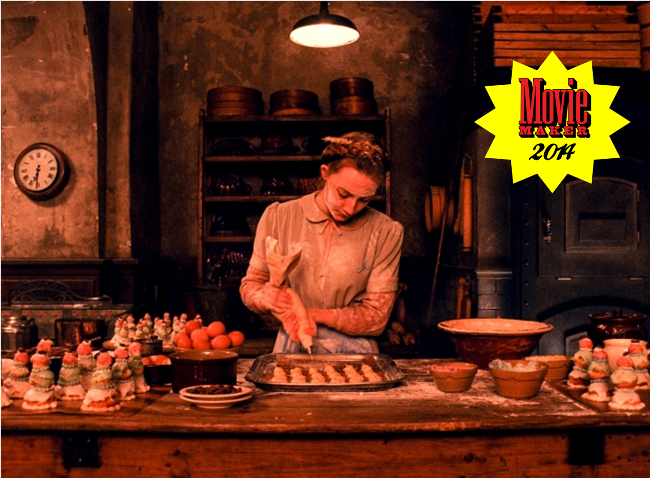 Our irregular blog Feast for the Eyes charts the gastronomic iconography of the screen, pondering the depths of narrative, character, and theme that a dish can encode between its layers. Usually, we devote an entire entry to one film and one food item, but since it’s 2014 in Review week, we’re taking the opportunity to do a special edition: ranking the Top Five Food Moments in 2014 Films.

2014 was, on the whole, an exceptionally food-centric year at the movies. First and foremost, the behemoth Jon Favreau comedy Chef whetted the nation’s appetite for Cubano sandwiches, preferably served fresh from the window of a vehicle. (Chef also inspired a few pop-up dining events around Los Angeles, from Favreau and culinary consultant Roy Choi serving the famous sandwiches at the Grove over Labor Day weekend, to a specially designed tasting menu at the restaurant Animal. We mention these because we’re still sore about not attending.) Choi’s artistic involvement in Chef is well-documented but worth revisiting, as an example of two artforms, cooking and storytelling, coming together in perfect harmony.

Then there was Michael Winterbottom’s The Trip to Italy, the sequel to the satirical tragicomedy-come-travel program The Trip. This year Steve Coogan and Rob Brydon trade England’s Lake District for a dash around Italy’s food hubs (Piedmont, Tuscany, Liguria, Rome, Capri and more), enjoying courses like “pasta parcels filled with a cream of scorpion fish, garnished with red and yellow peppers and basil,” and “black ravioli stuffed with mussels, served on a potato cream garnished with candied tomato and white tomato foam.” (IFC Films generously included recipes of some of the featured dishes in the film’s press kit—not that we’ll be making those at home anytime soon.) Yes, the food takes a back seat to Coogan and Brydon’s squabbling, meandering conversations, but with company that charming, we’ll make do with tantalizing glimpses.

Black ravioli at Ristorante Oliver Glowig in Rome, from The Trip to Italy. Courtesy of IFC Films

Honorable Mentions: Cheryl Strayed (Reese Witherspoon) wants a Snapple and bag of chips at every pit stop along her 1,000-mile trek up the Pacific Northwest in Wild. Funny the things you crave when you really get down to it—although anything’s better than cold mush, garnished with tuna jerky or no. Only Lovers Left Alive‘s Adam (Tom Hiddleston) and Eve (Tilda Swinton) partake in some O negative on a stick during a game of chess, looking so louche and glamorous (even in bathrobes) as to make even non-vampires want a lick. The Boxtrolls is set in the fairytale town of our dreams, Cheesebridge, where social pecking order revolves around the sophistication of one’s cheese palate, and Milk Street eventually turns into Curds Way. That its villain, Snatcher, is undermined by his Achilles heel of a lactose intolerance, is a stroke of delightful, original, and yes, cruel genius. Finally, while we don’t get to see what they eat, we got a kick out of watching Lou Bloom (Jake Gyllenhaal) invite news director Nina (Rene Russo) to a Mexican restaurant in Nightcrawler, like only he could: “Cabonita has been called ‘an authentic taste of Mexico City.'”

Anyway, onto the main course.

Normally it’s criticism to say an actor’s chewing the scenery, but watching Josh Brolin doing precisely that in Paul Thomas Anderson’s Inherent Vice is pure delight. Brolin plays Det. Christian F. “Bigfoot” Bjornsen in a career-best performance. It’s a character with a ferocious hunger: to maintain his macho, right-wing image, to do the right thing, to earn respect, to avenge his fallen partner, and to forge an uncomfortable peace with his hippie counterpart, Doc Sportello (the inimitable Joaquin Phoenix).

Bigfoot won’t let himself admit to all of these appetites outright, though, so instead he eats his feelings. Or, depending on the moment, he will suck on his feelings (with a chocolate banana habit that elicits priceless lip-curling reaction shots from Phoenix), demand second feelings (howling “Moto panacaku!” at beleaguered Japanese service staff in a restaurant), or inhale his feelings and then just eat the whole damn crop, shoveling bushels of pot into his open mouth off a platter. Bigfoot’s journey is both funny and moving to watch—a character you thought was the bad guy, who turns out to be a broken man filling the emptiness inside him with whatever he can.

Scarlett Johansson in Under the Skin. Screenshot by Into the Mirror

Dessert is a concept that is unique to humans, of all earthbound creatures: food that doesn’t have much (if any) nutritional value, but provides a world of emotional fulfillment. One of the most comically upsetting examples of how very alien Scarlett Johansson’s character in Under the Skin is, no matter how she tries to fit into her new surroundings, involves a bite of chocolate cake. Few situations captured onscreen this year were as nerve-shatteringly suspenseful as Johansson slowly, slowly, s-l-o-w-l-y lifting the piece of cake to her mouth… only to half spit, half vomit the bite back onto the plate. It’s one of the character’s many tragicomic attempts to be human in the second half of Jonathan Glazer’s film, and despite what we’ve seen of her actual dietary needs (hint: they’re not as sweet), it’s a more poignant, sympathetic scene than you might expect.

Tony Revolori and Saoirse Ronan in The Grand Budapest Hotel

Unfortunately for us, the worlds that Wes Anderson creates cannot be stepped into—we cannot book a ticket to the Republic of Zubrowka (even though TripAdvisor cleverly recommends that we do), check into the Grand Budapest Hotel (though if we were lego-sized we could), and ask M. Gustave (Ralph Fiennes) where we might grab something delicious to eat. If we did, the concierge would tell us to go to the famous Mendl’s bakery and purchase a light pink box with a silky black ribbon which, untied, would fall open to reveal their signature pastry: the courtesan au chocolat.

Made by the lovely Agatha (Saoirse Ronan), the pastries are an important plot point in Grand Budapest Hotel‘s charmingly convoluted tale, even going so far as to assist in a prison break. Fluffy, colorful, delicately structured—it’s hard not to look at them as a symbol for Anderson’s masterpiece itself. (They’re also just really pretty.)

When all’s said and done, though, we can take one thing away from Anderson’s spectacular fantasy world: a recipe. This cooking video and the links above are just part of the many real-world expressions that made The Grand Budapest Hotel a pop-culture sensation in miniature. We hope that it’s only one of many exquisitely designed cinematic confections to follow, hand-made panaceas to a franchise culture that too often tastes mass-produced and stale.

Courtesy of the Weinstein Company

As we’ve already seen on this list, food in movies can be used to disgust an audience just as often as it evokes satisfaction and desire.  Snowpiercer does both, embracing the long tradition of science fiction with an entertaining, affecting moral core. Within the post-apocalyptic food chain that the train setting represents, our gang of protagonists have to fight for their next meal—a better meal, with stakes rising the closer they get to the head carriage.

Bong Joon-ho packs an amazing amount into Snowpiercer‘s devastating political parable: sequences of Spielbergian wonder, Gilliam-esque absurd humor, and gross-out moments that would make Park Chan-wook proud. Of the latter, most memorable is when we learn about the “bug bars” Tilda Swinton’s character, Mason (a delightful mash up of some of histories most repugnant leaders), has been feeding to the citizens at the back of the train. Even in food-savvy L.A., a city that more than any in America has warmed up to the idea of eating bugs, we witnessed audiences turn vocally squeamish at the revelation of the  machine that mashes the bugs into blocks of blue, slimy protean jelly.

Courtesy of the Weinstein Company

The group makes its way through the carriages, a dreamlike sequence of controlled habitats. One of them is an aquarium that comes with a sushi bar. It’s a pleasure to watch Swinton explain to her ragtag captors that sushi is only served twice a year on the train, to maintain the balance of the aquarium’s closed ecological system. Yet their enjoyment of the delicacy is tempered with sobering melancholy: as the train sweeps past mile after mile of desolate icy wasteland, what could feel more impotent, more artificial—more like whistling in the dark—than the fleeting pleasure of a single, tiny piece of sushi? No matter the delicious food the characters encounter (Chris Evans’ character, Curtis, is later offered steak) it cannot cleanse their palate of all they have done—and eaten—to survive.

Miles Teller and Paul Reiser in Whiplash. Courtesy of MovieStillsDB.com

Early on in Damien Chazelle’s Whiplash, Andrew (Miles Teller) goes to see Rififi with his father (Paul Reiser), who gets a bucket of popcorn and a pack of Nestle’s Raisinets, and proceeds to empty the latter into the former. When Andrew is offered a handful, he tries to conceal his distaste, saying that he prefers to just eat the popcorn around the Raisinets. His father replies: “I don’t understand you.”  The simple gesture (characteristic of Whiplash‘s lean, efficient storytelling) immediately illustrates the vast differences between father and son—a crucial psychological backdrop for the film. Obviously Andrew has not inherited his father’s sweet tooth—nor his sweet nature, as we come to realize over the film’s 90 relentless minutes. Blood, sweat and tears: It’s the salty substances that Andrew responds to the most, and at the merciless hands (and decidedly salty language) of Terence Fletcher (J.K. Simmons). As the primary foil to Fletcher’s torrents of abuse, Andrew’s father offers the boy nothing but love, understanding, and forgiveness at every turn (even in the last scene, he waits in the wings with open arms, desperate to welcome back his prodigal son). He’s pretty much the ideal parent, whom any kid would be lucky to have… except the greatness-at-all-costs Andrew, susceptible to Fletcher’s jabs at his father’s mediocrity (Mr. Neiman teaches high school, not college). Andrew’s a freshman at college, already embarrassed to be seen going to the movies with his dad in front of the cute girl at the concessions stand. How could he possibly stand to be seen with a dad who makes the gauche, downright childish move of dumping Raisinets into popcorn? MM

Read previous Feast for the Eyes posts here, and the rest of 2014 in Review Week here.

Feast for the Eyes: An Octopus Reverie in Oldboy
Of Tacos and the City: In Laura Gabbert’s City of Gold, L.A. is Most Beautiful Through Jonathan Gold’s Eyes