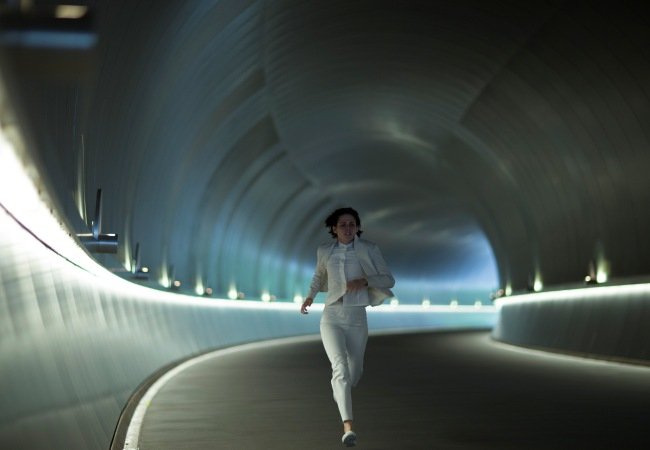 As a cinematographer, I have made several movies with director Drake Doremus, including Like Crazy and Breathe In.

Those films had been shot with a naturalistic simplicity, utilizing mostly a handheld camera with long lenses and, often, available light. Equals was going to require something quite different.

Equals is a love story set in a future where a society called The Collective “switches off” complex human emotions in its population at birth. Our story revolves around Nia (Kristen Stewart) and Silas (Nicholas Hoult), who have become “switched on” by a disease and begin to have feelings for one another.

The film was shot in five different countries—primarily in Japan and Singapore—over the course of several months. As the film required more than 700 visual effects shots, we used a combination of real locations and sets.

We wanted the world of The Collective to initially feel large in scope, but confined; to slowly break apart and progress into something a bit messier as the character’s forbidden emotions bubbled up. Our choice of lenses, colored lighting and camera motion (or lack of) was crucial to this effect.

For early scenes, we photographed the locations with wide, sharp lenses and a completely static camera. As the story progresses, we began to throw these aesthetics away. We slowly transitioned into longer, uncoated lenses, which I operated handheld. This takes our closed off claustrophobic world and opens it up.

I decided early on that I wanted to light the entire movie using only LED lighting, and was lucky enough to find gaffer Andy Cole up for the challenge. We wanted the light in the movie to have hypnotic motion to it, often changing colors and intensity with, seemingly, a mind of its own. The benefit of LED lighting to me was that we could have the ultimate control of this color and intensity.

Andy and his team located many existing types of movie and theatrical lighting fixtures, as well as LED strip lighting available to us locally, and modified them for our purposes. The LED lights were able to emulate more than 16 million colors. During our testing process, we chose colors for the lights based on a few of my favorite images taken with the Hubble telescope.

We worked very closely with the art department to install the LED lighting into the sets and on location so that it would blend seamlessly into Equals’ world. We were then able to control all of lighting with computers to create the desired effects. MM

Paradise Lost: Viggo Mortensen Heads a Brood of Survivalists in Matt Ross’ Captain Fantastic
Flowchart: So I Went to Film School. Now What?