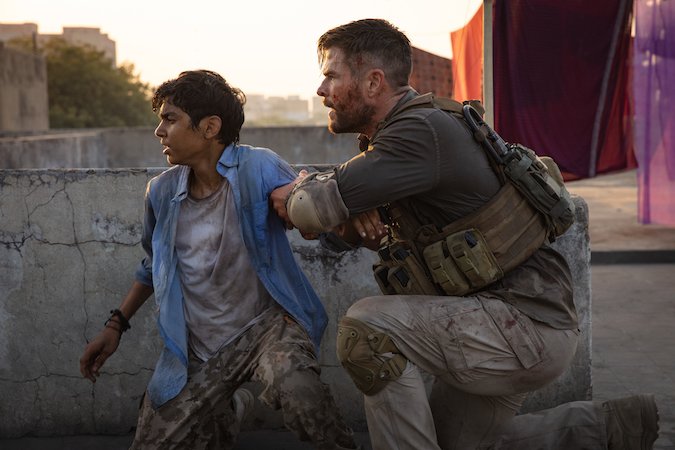 “That was something that we tried to lean into for this movie — real action, real consequences and just a feeling that you’re you’re there and you’re in it,” Sam Hargrave said. “I’ve worked on so many movies that take place in front of green screen or blue screen or soundstages and you know, there’s some great stuff out there and those movies are fun, but there’s no substitute for the feeling for the visceral nature of being there. And being in that environment.”

“And when you’re seeing Chris Hemsworth sucking wind, and he’s tired, that’s helping his acting because he’s really been going on for a minute-and-a-half of action that he’s done. This might be take 17 that you’re sitting in the final product.”

The minimal edits meant Hemsworth and the other actors had no choice but to keep going.

“The difficult part — the extremely satisfying part when you get it right — but the difficult thing is there’s no backup, there’s no B camera. There’s no, ‘Oh, don’t worry about that one move, we’ll cut around in the edit you.’ If you get, you know, a minute-and-a-half in, and on move 47 you forget, or you stumble, and you know, all falls apart, you don’t just cut around — you’ve got to start again.”

The crew couldn’t quit, either.

“We’ve got this whole group traveling through these spaces. It’s me operating the camera with the focus puller and the boom operator, and we’re all just running through these small spaces. So there’s a dance of logistics: How do we get all these people through this space without turning around and seeing them in the shot? It was just an incredible technical feat and the cast and crew were just so awesome.”

How did they navigate around those 17 million people, going about their lives? Safety was paramount, he said. 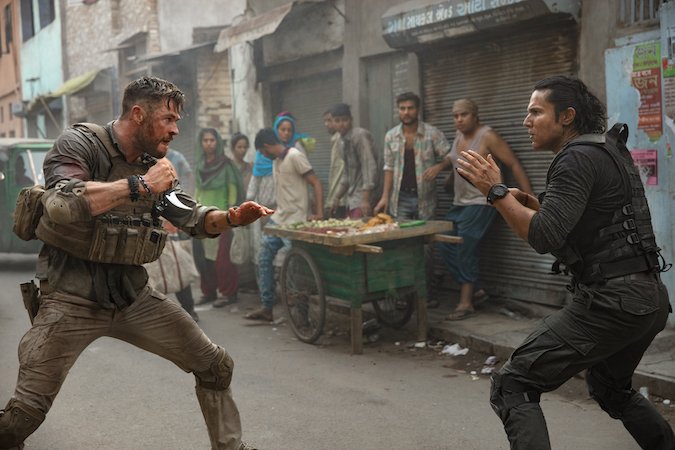 Chris Hemsworth and Randeep Hooda in the 12-minute “oner” in Extraction, directed by Sam Hargrave

“We had 200 to 300 security personnel shutting down five city blocks, but because there’s so many people, yeah, we had to account for all of them,” he said. “At the end of the day, we’re just making the movie and we all want to go home to our families. So we have to keep everyone safe.”

Strapped to a Car

Some of the sequences — especially in cars — left him with no option but to attach himself to a small car and follow the action.

“Part of the feeling that Tom Sigel, our DP, and I had decided on was when we were in Dhaka, when we were on this mission, we wanted it to be very visceral and kind of almost documentary-style — very handheld, very energetic. Not shaky cam, where you can’t tell what the heck’s going on,” Hargrave said.

He noted that when films use long lenses to shoot car chases rom afar, audiences can feel the distance. He decided the camera had to be in the mix.

“Do we use a camera crane arm? Nah, it’s too steady,” he said. “I just gotta get in there. So we devised a number of different modified vehicles so that I could do these certain things, and I think the the footage is floating around on Instagram.”

***SPOILER ALERT!!! Only check out this video if you want to see behind the scenes footage of how we pulled off some of the hard hitting action from EXTRACTION, coming out in just 4 DAYS! Big thanks to @danielstevens1 @t_witte @ropetechhawaii and the entire stunt team for helping create an incredible sequence. 🙏🏼 #extraction #bestonerever #chrishemsworth #therussobrothers #makingmovies #action #stunts #geterdone #gratitude

They used a normal camera vehicle for most shots, but at one point the wheel base was too wide and the car was too heavy to get around corners. Fortunately, during rehearsals, they decided to use a “little rocket race car” that could drift — as in The Fast and the Furious: Tokyo Drift —around corners. Driver Tyler Witte got “inches from the rear end” of the car Hargrave was shooting.

Hargrave was connected by “a little piece of tech line,” he said, because he needed to dismount from the car quickly to keep continuously shooting the next sequence.

But why did he have to do it?

“I’m like, man, I, in good conscience, have a hard time asking these camera operators to do this because things can go sideways. If they do, I would rather be in that spot because I’ve been in a number of hot spots throughout my career, and I’ve been able to, you know, just with body awareness, and sometimes luck just been able to get out of it. So I would rather it be me.”

How does he silence the part of his brain whispering you’re going to die?

“You know, it’s funny, you don’t silence it,” he said. “You try to step back and look at all the possible scenarios, like ‘How can this go wrong? What are the ways this could go south and someone could get hurt? Me or anyone else?’ And you think of all the possibilities and then start to just systematically go down the list and eliminate those variables.”

Once they’re all accounted for, he goes into “a very Zen state,” he added.

All that said, Hargrave told us that the 12-minute “oner” wasn’t the biggest problem he faced with Extraction. The biggest problem, he said, involved the bridge at the end. You can read that story here.