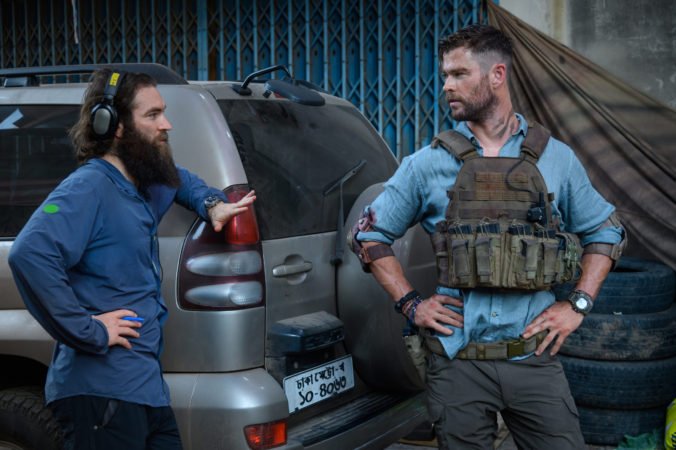 Extraction director Sam Hargrave says his biggest challenge while making the Chris Hemsworth action-adventure film wasn’t a stunt — or even pulling off that spectacular 12-minute continuous fight scene. It was finding the bridge at the end of the film.

Hargrave, a stuntman-turned-director, has an attitude toward problem-solving that explains a lot about how he pulled off Extraction, which is poised to become Netflix’s most-watched film. Bear in mind, Hargrave is the kind of director who fastened himself to a tiny speeding car to get as up-close as possible during the 12-minute scene at the center of the film.

“Some people see problems, and I see opportunities,” he told us in the MovieMaker Interviews podcast. “And one of our biggest opportunities for using our creative minds was finding the right location for the bridge and the end of the movie.”

The production, shot in Bangladesh, India and Thailand, considered through more than 70 potential bridges in search of exactly the right one, he said.

“What you see is bridge number 73. And I kid you not, this is one of the best stories and you couldn’t write it if you tried. We found the perfect bridge. I think it was bridge 69 or 70.”

It had the perfect grade, landscape, height and length, Hargrave explained.

“It was, ‘Oh, we love this bridge… it’s amazing,'” he recalled. “We start getting into prep, and it’s like, ‘One location down. Let’s move on to the next one.’ And then somebody comes in with an article from the local paper.”

“And they say, ‘Give this a read,’ and I give it a read. And I laugh out loud, because I think it’s a joke. And they say it’s not a joke. The article says that underneath this bridge, they have recently discovered — the army in Thailand, their Army Corps of Engineers or whatever the equivalent is — they were down there talking about expanding the bridge that we were gonna use, and they found live ordnance from the Second World War.”

Three opportunities later, they arrived at bridge number 73, the one crucial to the climax of Extraction.

More extraction awaits: Joe Russo has started working on a script for another Extraction film, which may be a sequel, or may be a prequel.

You can listen to our full interview with Hargrave — which includes detail on how he became a stuntman and how Extraction pulled off the 12-minute fight scene — on the MovieMaker Interviews podcast, available on Apple or Spotify or here by clicking the arrow here:

Extraction, directed by Sam Hargrave, is now streaming on Netflix.

Movie News: Tom Cruise in Space?; Extraction 2; Nic Cage as Joe Exotic
Can You Film in Sweden During the Quarantine?