Eminem Gets Standing O for Surprise Oscars Performance of ‘Lose Yourself’ 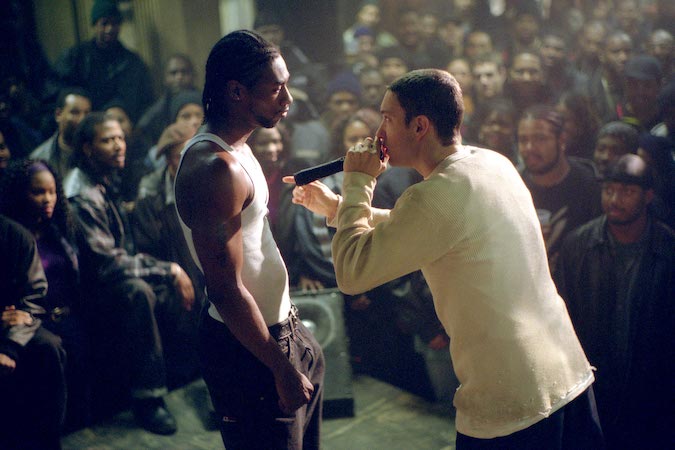 Eminem didn’t show up when his song “Lose Yourself” won an Oscar in 2003, and he set things right Sunday with a surprise Oscars performance of the 8 Mile song that earned a standing ovation.

The song, heavily censored by ABC, came out of nowhere after a montage of deeply connected movies and songs — including 8 Mile and “Lose Yourself.” It was introduced by Lin-Manuel Mirana, whose Hamilton pays homage to Eminem, among many other rappers.

Another musical standing O followed moments later, when Cynthia Erivo, star of Harriet, performed the theme song of the Harriet Tubman biopic, “Stand Up.” An image of the real Harriet Tubman appeared on a screen behind her and a choir of singers.

But people expected that highlight, since “Stand Up” is nominated for Best Original Song this year. No one expected to hear “Lose Yourself” on Sunday.

Eminem, born Marshall Mathers, performed with all the old intensity, dressed in black, as images from 8 Mile appeared onscreen behind him.

In the past, Eminem was often accused of many of the things the modern-day Oscars stand against — he was accused of misogynistic and homophobic lyrics, from which he has distanced himself.

Eminem was so outside of the Hollywood scene that he stayed home when the Oscars honored him 17 years ago.

But he could always make irresistible music, as he reminded the world when he stealth-released his latest album, Music to Be Murdered By, weeks ago. It proved his movie lover bona fides: The whole album is an Alfred Hitchcock homage, and has earned headlines for “Darkness,” which begins as what seems like a first-person portrait of a mass shooting, but turns into an earnest call for gun control.

He reminded the Oscar audience that he can still shock, too. His performance Sunday had an “is this happening” quality, and had nothing to do with a current film. He just performed because “Lose Yourself” is a great song that gets people out of their seats.

The show’s producers initially caught people looking surprised or confused, and then just losing themselves completely.

“Lose Yourself,” which won an Oscar for Eminem and his co-writers Jeff Bass and Luis Resto, was the first hip-hop song ever to win an Oscar for Original Song.

Chris Rock Explains Why Oscars Don’t Have Hosts Anymore: ‘Twitter’
The Irishman Shutout at Oscars: What Does It Mean for Netflix?