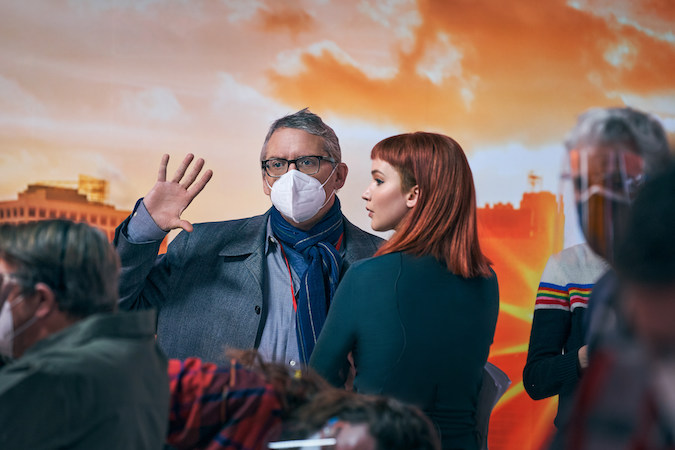 Don’t Look Up sparks fierce debate online and we revisit when another filmmaker took on critics way back in the ’70s; Jockey star Clifton Collins Jr. finds himself in awards contention after decades as a character actor; the 2022 film festival submission season is now open. All in today’s Movie News Rundown.

Look Forward: There’s plenty to look forward to in 2022, and Criterion has a strong roundup of the movies – both studio and arthouse — that we can possibly expect by year’s end. As we’ve covered before, it’s shaping up to be a promising year.

No More Excuses: A big aspect of the instructional pieces that we publish here are meant to remove any excuses you might have for not making movies. With potential obstacles removed as much as possible — let’s be honest, there will always be obstacles — your creativity can shine.

On that note: If you’re someone who has always felt that you’d be aided by a writing partner but you don’t know how to find one, then check out our conversation with Jockey writers Clint Bentley and Greg Kwedar. In the piece, they explore how they complement each other’s skills and go over their unique Google Doc set up for splitting up scenes from their initial outline. Lots of great stuff to chew on in there.

More Jockey: Bentley and Kwedar’s film stars Clifton Collins Jr. as an aging jockey and was inspired by Bentley’s father’s career as a jockey. The New York Times has an extensive profile on the character actor, who is getting a rare moment in the spotlight as a lead in awards season contention. Collins takes every role, both big and small, seriously. “You can’t just desecrate the challenges real people out there are trying to overcome,” Collins says.

If You’re Past the Writing Phase: And are submitting your work to film festivals, first off, congratulations. That’s a huge step. Secondly, the Tallgrass Film Festival is accepting submissions for its 20th edition. One of our 50 Film Fests Worth the Entry Fee, Tallgrass is “stubbornly independent” and that similarly titled category is for “narrative features made for under $750,000 USD with no traditional distribution.”

Also Wanted: Tallgrass is looking for features “from any genre with a director that self-identifies as Black, African-American or part of the African-Diaspora.” They also have a VR category and lots of cash prizes.

Don’t Look Online: Adam McKay’s climate crisis satire Don’t Look Up premiered on Netflix over the holidays and posted strong viewing numbers.  (Forgive me, it’s hard to describe streaming statistics.) The film has mixed-to-negative reviews from critics with a “Rotten” 56 percent on Rotten Tomatoes and a 50 on the weighted, non-binary Metacritic. Don’t Look Up writer-director Adam McKay took to Twitter last week with this curious thought:

Loving all the heated debate about our movie. But if you don’t have at least a small ember of anxiety about the climate collapsing (or the US teetering) I’m not sure Don’t Look Up makes any sense. It’s like a robot viewing a love story. “WHy ArE thEir FacEs so cLoSe ToGether?”

I’m Not the First To Point Out: That this appears as a pretty straightforward bad faith argument. But it’s Twitter so I’m not one to ever judge too strongly. It’s supposed to be like a conversation, remember? But this tweet does remind me of Don Draper’s recurring advice throughout Mad Men:

But He’s the Lead, Not the Hero: Remember, Draper was trying to shift the narrative on tobacco’s newly uncovered health risks when he first brings up this strategy in a meeting with Lucky Strike.

Further Reading: Ryan Meehan wrote a feature for Mubi’s Notebook on where Don’t Look Up succeeds and where it doesn’t. I promise it’s less hot take-y than Twitter.

Meehan says: “Grand societal statements in film are a Hollywood cliché, but whatever their cause, in the final analysis, these films propagandize most effectively on behalf of Hollywood itself, its moral and aesthetic authority, and its own unchecked flows of content and capital.”

Before You Opine: For a better time when filmmakers didn’t engage with critics, might I draw your attention to this wonderfully written piece from Stanley Kubrick on one critic’s reaction to his 1971 film A Clockwork Orange. Kubrick was so disheartened by the overwhelming controversy over the film’s depictions of violence that he pulled it from theaters and delayed its release for a full year. He was even responsible for the subsequent U.K. ban of the film — which lasted 27 years.

Fool Me Once: I find it curious that in the early ’70s and then two decades later in 1997, critics misread satirical portraits of culture’s obsession with violence as pro-Fascist works themselves. It’s weird they keep getting duped on that particular point.

Has Anyone Coined the Term “Big Streamer?”: It would be an apt description of the major players in the streaming realm. If not, let me try.

A Message from Big Streamer: Here’s a concise list of movies and TV coming to the various streamers in January, from The Times. After seeing The Age of Innocence a month ago on 35mm, I’m intrigued for The Gilded Age. Carrie Coon!

From the MM Archive: Nicole Holfcener, who was listed in that above Criterion 2022 wishlist, had this advice for MovieMaker in her 2018 “Things I’ve Learned” column: “Watch out for getting caught up in a performance if it’s not serving the story in the right way. For instance, watching an actor sob may be impressive, but only if the character is supposed to be sobbing. Same goes with funny.”