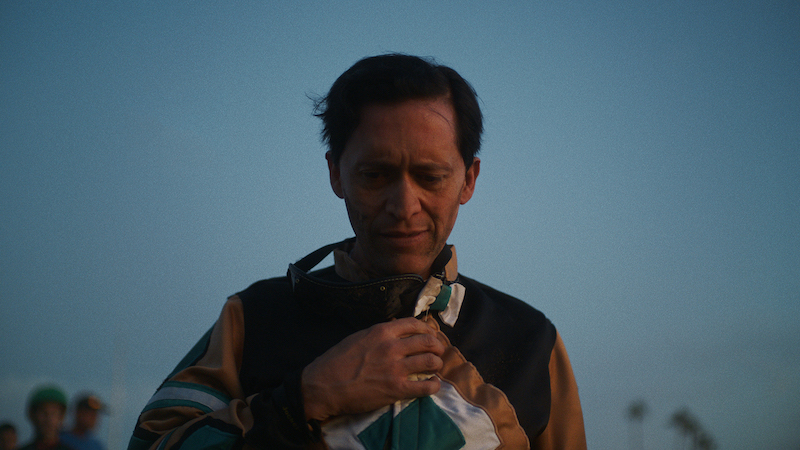 Greg Kwedar and Clint Bentley are screenwriting partners who have worked together for 10 years. Their first feature was Transpecos, a border thriller starring Clifton Collins Jr., which Kwedar directed. Now Bentley steps into the director’s chair for Jockey, about an aging jockey (Collins) who mentors a young racer (Moises Arias). Bentley’s father was a jockey when he was young, and at his funeral, Bentley saw a window into a world he hadn’t seen explored in other racing movies. In this feature, Bentley and Kwedar chat about what goes into a healthy co-writing partnership.

Greg Kwedar: Finding a writing partner is not something that’s strategic. You’re just like, I like to be around you. If two people are exactly the same, one is unnecessary. In the beginning, we had very distinct strengths, and over time, the other’s strengths helped build the deficient muscles in the other.

I’m someone who thinks architecturally — I have an endless well of ideation. If I was on my own, there would be 1,000 things on the wall — none of them really finished or very deep. In Clint’s work is this amazing depth of follow-through, of layers of richness, that lends such a special voice to the things that we write. What I bring to it is this adventurous, thrusting forward ambition. Those two things dovetail well together.

Clint Bentley: Most of the things Greg and I write together are for one of us to direct. And so whoever is going to direct the project eventually, generally is the guiding person on what goes in and what stays out. But with those scripts and also things we’ve written on assignment, we have a real “best idea wins” policy.

Kwedar: Because there are two of us, the outline is not a gospel. When we write an outline, we try to write it as prose and just tell the story. That process can take a very long time, especially because so much of what we do has almost this journalistic approach — we like to peel back the curtain behind worlds. There’s sometimes a multiyear discovery process before we even have written a draft, as we’re trying to discover the essence of the story we’re trying to tell, and the specific details.

But once we get to that point, and we have drafted that outline, that then goes into a Google Doc as a live document. And it turns out that each paragraph is almost like a scene, or a few scenes. Once that’s there, we decide who’s feeling something, or who has a way in and an energy. It could be several scenes that follow an idea, so that there is coherency and consistency. We just start chopping it down. Then the independent scenes go into a Dropbox that we share. 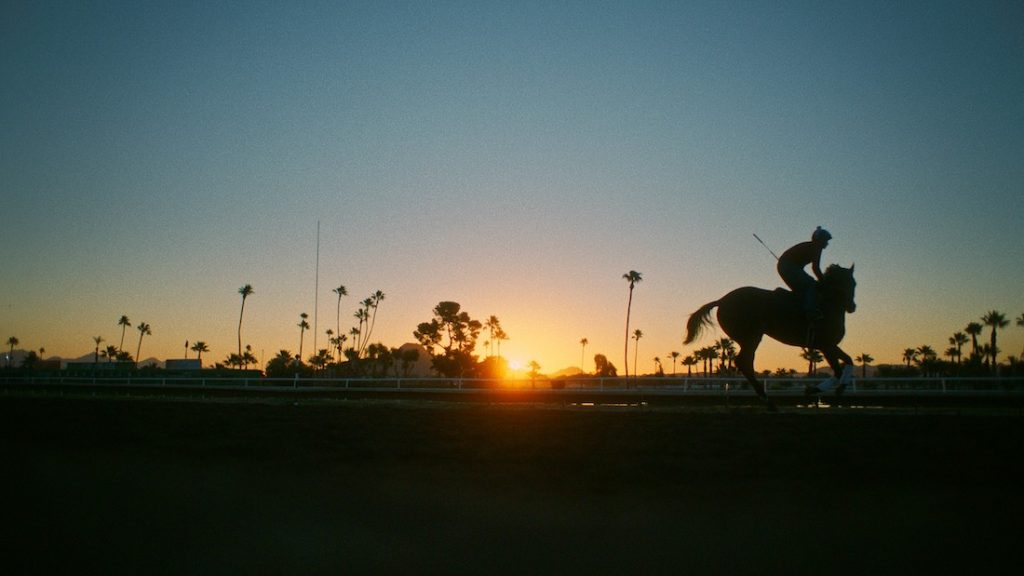 Clint Bentley: We’re always reading the scenes, just because you’re excited about seeing what the other person did. And you also want to see what they did so you can maybe use something from there in a future scene. And if there are any big hiccups or big changes that we need to discuss, then it’s like, Alright, we need to talk about this. But at the same time, we’ve learned not to get into the edit process too early.

Generally, after one of us writes a scene, the other then takes the first pass through that scene, and does an edit. And then it goes back and forth until it becomes hopefully a good-looking Frankenstein final version.

Greg Kwedar: I immediately read new scenes. It is just a delight. It’s a bit cheesy, but you have to find something to celebrate every day, because it’s so hard to get to even making a film. We’ve had a few scripts that we wrote over the last few years that didn’t become films. They just sort of live as PDFs up in a cloud somewhere. But we still had joy from the act of writing them. To learn to appreciate that is important for the life of a writer. Because so much is out of our control. We got to go behind the curtain and learn about this strange world, or this strange profession, or institution, or system, or character, and we’re better for it. Things that we learned from writing other scripts, we definitely applied to Jockey, and helped make it better.

Once we get through all the scenes, we assemble them into a single master draft. Now that we’ve been doing this for 10-plus years, it’s crazy that this draft is almost always the length that a feature script should be. It’s not too insanely crazy shaggy, and it feels like it has a consistency of voice. It’s some kind of strange witchcraft that happens once that draft ultimately comes together.

That’s normally when I’m like, OK, we’re good. Let’s send it. And that’s where Clint’s strengths really come to play, like, Now the real work begins.

Kwedar: For first-time feature writers, the computer can be really intimidating. We wrote the first draft of Transpecos longhand. It’s really nice: You get a large-format notebook, and on the right side, write in screenplay format, but longhand. And then the left page would just be notes.

Then at the very end, you were holding something tangible.

Bentley: Whatever you can do, whatever trick you have to come up with, get to that shitty first draft. Every writer has to find their own trick. That’s huge. Whether it was our first script, or whether it’s any one that we’re writing now, how do you get to that bad first draft, that you can work into something better?

You learn to write through revising. Neither of us went to film school, so we didn’t have any formal training in how to write a script. 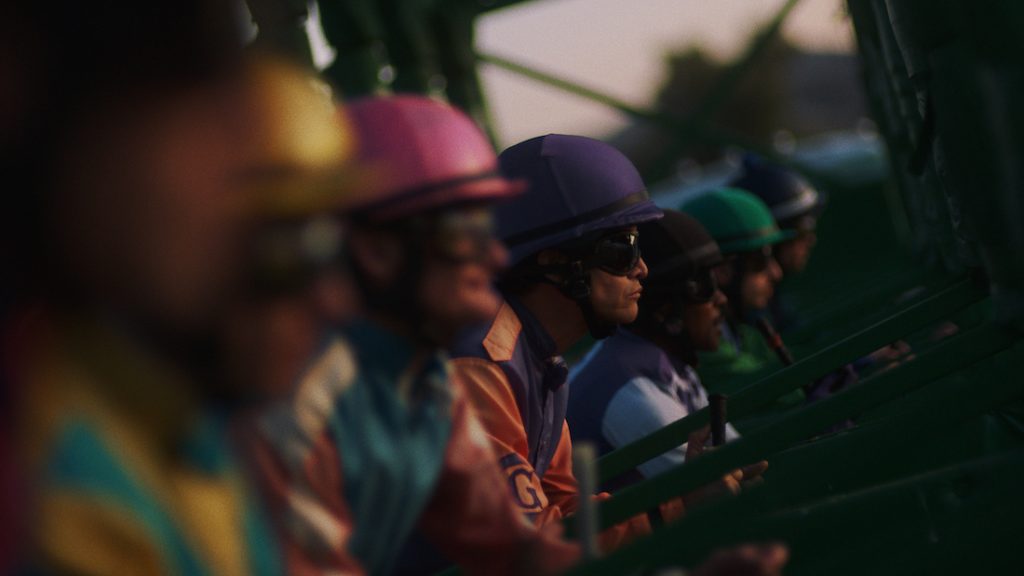 Collins Jr. at the starting gates in Jockey, from writers Greg Kwedar and Clint Bentley.

Clint Bentley: Jockey came from a personal the world, and Greg knew next to nothing. That became a huge asset, because Greg seeing it with fresh eyes revealed things that I never would have thought were interesting.

Greg Kwedar: A lot of times, first-time filmmakers get the advice: Take whatever you have available to you. And it’s almost like the advice is to think small. And I think there is an element of exceeding ambition that should come from a first film. Let it feel a little bigger and beyond your grasp and a little scary — it’s important to listen to that.

But then the question is how to accomplish it very craftily and very guerrilla.

We went down to the track in Houston and slept through a violent storm in a tack room where all the racing equipment is, and we were almost flooded out of this place with blow-up mattresses. When we woke up in the morning, the sun was rising, and you could hear the loudspeaker. It was doing a morning prayer in English first, and then in Spanish, and there was like a layer of mist over the track. And we walked out to the rails and there were these jockeys moving like a symphony in all different directions. Outriders were on the post smoking cigarettes and drinking coffee and talking crap — it just was so alive. It was obvious to us that we needed to pursue it.

Bentley: We probably went through five or six different endings that we wrote. Alright, this is the one. And then somebody would always be like, I don’t know, it doesn’t feel quite right. It was a group effort to get there. We knew it was coming up on the schedule, and it was constantly refining it a little bit, to get to that place where it landed.

Kwedar: A lot of times filmmakers will get defensive and feel like they have to have the answers. We always say if we only meet our vision, we’ve failed. But opening the doors to input from the world around you, and from the team that you brought to the table, can only make the film better.

Jockey, written by Greg Kwedar and Clint Bentley, opens in theaters on Christmas.