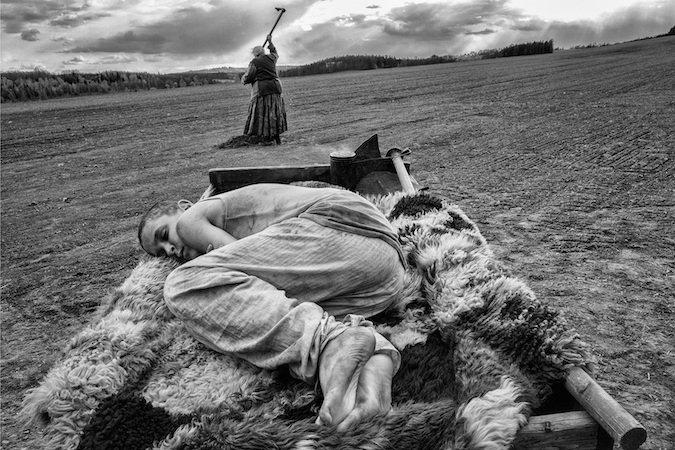 The Painted Bird follows a boy from an unnamed country through an odyssey of World War II cruelty. It uses an Interslavic dialect not tied to any one place, so as not to indict any specific people for the awful behavior of the boy’s abusers. It is beautifully made but distressing to watch, and even more distressing to hear: Director Václav Marhoul and sound supervisor Pavel Rejholec use immersive, detailed sound to detail horrors worse than the ones they show on screen. In the following conversation, they spoke about how sound helped them tell their story.

MovieMaker Magazine: How did you make scenes of brutal violence resonate with the sound mix?

Pavel Rejholec: The Painted Bird is quite special in the way in which the story is told. Lots of things are not shown visually, they are left to the hearing and imagination of the audience. This unusual freedom allowed me and my team to be quite creative and imaginative in thinking how certain actions might sound and still allow them to be imagined by the audience. As a sense, hearing is much more emotional than vision, and thanks to that feature, you can be touched just by hearing a certain sound. You can almost physically feel it, if it is done right. And that was what we tried to achieve.

Václav Marhoul: My aim was not to show visually explicit violence, the sort that is now so common in all films. In my case, in the individual shots, basically everything is just suggested. Each viewer has, without exception, the possibility of following the path of their own imagination, keeping each scene in their head to play it out, project it, fill it out in imagination. And precisely for this reason, the sound in these scenes is essential, because it completes or even fills the generally lacking visual impression.

MM: How did you make the movie’s natural landscape sound so vivid and alive?

Rejholec: When we talked with Václav about the sound, we came up with the idea that we would like to create an immersive world of sound, which would be far bigger than what you see on the screen. Also, this scarcity of dialogue and the nonexistent score created a kind of space that normally doesn’t exist in a usual movie. Ambiences and sound effects were specifically designed and mixed to create a deep sense of space around the viewer. The feeling we wanted to achieve was that there is a real world around the audience and what is on the screen is just a small part of it.

Marhoul: We originally assumed that we would work primarily with contact sound — that is the sound recorded directly during shooting. And not only with the sound recorded for each take, image, or entire scene, but also the sounds emitted by nature itself. These were filmed every day separately, off from the scene. And precisely these sounds became a kind of guide, an inspiration leading to our final creation of a unique, self-contained but entirely truthful world, which breathes and lives its own life, which is really so truly indifferent to human fate.

Marhoul: Any Slavic language has an enormous difference from all other languages, whether Germanic, Romance, or Anglo-Saxon. This difference is caused quite strikingly by the different use of consonants and vowels. Putting it simply, the movement of the lips, breathing, position of the tongue and vocal cords are completely different. Also, the Slavic languages use soft and hard sibilants. For actors who didn’t grow up in one of these languages, this was really a tough nut to crack, because the screenplay and I myself insisted that everyone speak this Interslavic dialect. If I’d let them act in English, thanks to the planned post-synchronization, even the lip movement would be so different that “embarrassing” entirely fails to describe it.

Likewise, it was evident that even the actors themselves would not, because of all these factors, have been able to make even their own post-synchronization work. It is worth mentioning that Julian Sands was able to enunciate several sentences so well that you couldn’t believe what you’d heard. Nonetheless, in the final process we selected Czech actors whose voice coloration best matched the original, and they spoke all the necessary dialogues for the individual characters.

The Painted Bird, directed by Václav Marhoul, opens in theaters and on demand on July 17, 2020, from IFC Films.