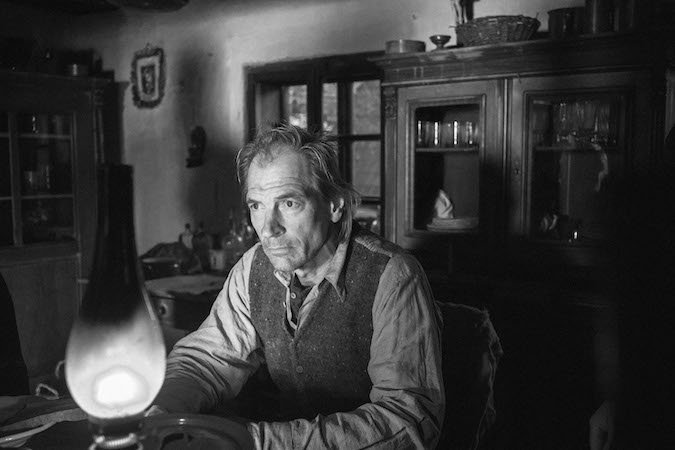 “I was drawn to The Painted Bird because of its unflinching, stark but ultimately redemptive consideration of human endurance,” says Julian Sands. “The bleak hinterland of war-torn Eastern Europe is as beautiful and moving as it is disturbing and grotesque.”

The clip below of Sands’ performance, presented here for the first time, captures all of the qualities of The Painted Bird, the devastating new film written, directed and produced by Václav Marhoul. Sands plays the sadistic Garbos, who agrees to care for a young character we know as the boy (Petr Kotlár), displaced by the horrors of war, as he searches for safety and security.

But Garbos turns out to be almost the worst possible guardian, as the clip below only begins to detail.

You may want to use headphones for this one. In addition to the rich black-and-white cinematography of Vladimír Smutný, The Painted Bird has the most richly detailed sound of perhaps any film this year, thanks to Pavel Rejholec.  Watch:

That final moment is a fine example of the film’s use of sound to detail what it doesn’t need to show. The fate we imagine for Garbos, abetted by the cries from within the hole, is much more vivid than anything the The Painted Bird could illustrate with images.

Fascinatingly, the dialogue is Interslavic, so that the cruelties committed against the boy don’t indict any one group of people – rather, they indict us all.

The film, based on the novel by Jerzy Kosiriski, is shot on 35mm and shows the evils of prejudice, superstition, and a lack of empathy for anyone we consider different. It is difficult to watch, and at the same time masterful. Besides Julian Sands and Petr Kotlár, the cast includes Stellan Skarsgård, Harvey Keitel, Barry Pepper, Udo Kier, Lech Dyblik, Jitka Cvancarová and Aleksey Kravchenko.

The Painted Bird, from IFC Films, opens Friday in select theaters, drive-ins, and on digital/VOD.