Derek DelGaudio: In and Of Itself Emotion Is No Illusion 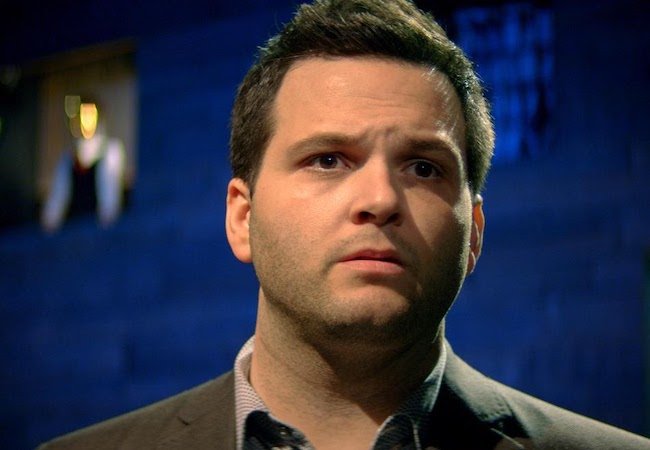 Derek DelGaudio and Frank Oz urge you to go into the new Hulu film Derek DelGaudio’s In and Of Itself with no pre-existing knowledge or expectations — which should preclude you from reading this article any further if you haven’t seen the film. It works best if you see it with no idea what you’re going to see. In fact, if you wondering, “Who is Derek DelGaudio?,” you’re probably the ideal viewer.

If you’ve already seen In and Of Itself, and have come here trying to understand how DelGaudio (seriously, last spoiler alert) pulled off all of those moving, emotionally commanding illusions, we still can’t help you. We’re in awe, and completely at a loss — as were the thousands of people who saw them when In and Of Itself ran for more than a year as an Off-Broadway show in New York City.

But we can tell you the one part of the show that DelGaudio says was absolutely not an illusion — though at one point, even Oz wondered if it was for real.

The film opens with DelGaudio telling the story of The Rouletista. It ends with DelGaudio, in tears, realizing that he has fulfilled a destiny he never sought. As DelGaudio explain to Eric Steuer on the latest MovieMaker podcast, DelGaudio’s emotions during that sequence are absolutely not for dramatic effect. You can listen on Apple or Spotify or above.

At one point during the production, Oz says on the podcast, he wasn’t sure if he agreed that DelGaudio should be so emotional at the end.

“Frank always questioned how emotional I got at the end,” DelGaudio says. “Because it was consistent, that I was very worked up at the end. And he, rightfully so, questioned: Maybe it’s a little much.”

Oz was mostly in the back of the Daryl Roth Theatre when DelGaudio performed the show, and at first didn’t track DelGaudio’s emotions from such a distance. But when he saw close-ups of DelGaudio, he realized how authentic his emotions were.

“And then when he saw it on film, he said, ‘Oh my God, I never realized how angry you were at yourself,” DelGaudio explains. “The anger at myself for allowing myself to become something that someone else said I was.”

“Derek is not acting or performing on stage — he was not,” says Oz. “He was living every moment on stage, and moving forward saying the next thing — which has been written — but he wouldn’t say it until he couldn’t not say it.”

Derek DelGaudio’s In and Of Itself, directed by Frank Oz, is now streaming on Hulu.

To Cast Balram in The White Tiger, Ramin Bahrani Made the Most of an Exploratory Trip to India and Went Off-Script During Casting
Best Places to Live and Work as a Moviemaker, 2021