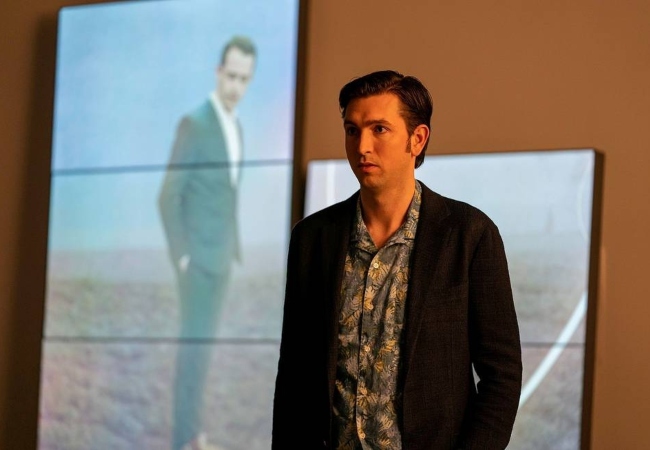 Nicholas Braun details what he thinks Succession‘s Cousin Greg would plan for a first date; George Clooney reveals what went through his head when he got into that motorcycle accident; RIP Sweeney Todd composer Stephen Sondheim. All in today’s Movie News Rundown.

But First: Happy late Thanksgiving! We binged on House of Gucci, thanks to this interview with the film’s writer, Roberto Bentivegna who says on the latest MovieMaker podcast: “I think the key for me was to make it very ironic. And to and to really not take the characters too seriously, not take the story too seriously. I’m not a particularly kind of dramatic kind of person.” Reminds me of Lady Gaga’s iconic (and foreboding) line as Patrizia Reggiani Gucci: “I don’t consider myself to be a particularly ethical person, but I am fair.” You can check out the episode on Apple or Spotify or right here:

RIP: Stephen Sondheim, the prolific composer-lyricist of some of the most popular musicals of all time including Sweeney Todd, Into the Woods, and Sunday in the Park With George died Friday at the age of 91. His lawyer and friend, F. Richard Pappas told the New York Times that the composer’s death was unexpected and that the day before, he had celebrated Thanksgiving with friends in Roxbury, Connecticut.

Sondheim Remembered: “He would rock his head back when he talked and often spoke with his eyes closed, like someone communing with a higher power, which he probably was,” 1917 director Sam Mendes wrote of Sondheim in a piece for The Guardian. “He was passionate, opinionated, uningratiating, sharp as a knife.”

Thanksgiving Box Office: The Hollywood Reporter says this holiday weekend’s box office numbers served as a “sobering reminder that moviegoing has yet to return to normal levels,” with Comscore clocking in the revenue for the 5-day Wednesday to Sunday window at $142 million. The weekend’s winners included Ghostbusters: Afterlife, which scored $95.3 in its first 10 days; Disney’s Encanto, which earned $40.3 million from Wednesday-Sunday; and House of Gucci, which snagged $21.8 million over its 5-day opening, including $14.2 million for Thanksgiving weekend.

Meanwhile: Tickets for Spider-Man: No Way Home are already flying off the digital shelves. When tickets went on sale at midnight today, so many fans were trying to buy them at once that some box office ticketing websites, including Atom Tickets, Fandango and MovieTickets.com — as well as movie theater sites like AMC and Cinemark — either crashed or put ticket-buyers into an hours-long queue, according to CNBC.

Cousin Greg: Nicholas Braun, the Succession heartthrob who plays the endearingly bumbling Cousin Greg on the hit HBO drama, recently revealed what his character’s idea of a first date might be after last night’s episode saw him successfully ask out Comfry, Kendall Roy’s public relations rep played by MovieMaker cover star and The Scary of Sixty-First director Dasha Nekrasova.

Picture This: “I think it’s something quite sweet or like, classic date-y. He might visit the Brooklyn Botanic Garden,” Braun told IndieWire. “Or I can imagine him going to a fair or an amusement park and playing the games. Shooting water guns into the [clown’s mouth] and riding a Ferris Wheel… I think he isn’t that creative. It’s just like, what is a typical date? And I think that’s very sweet. I don’t think he tries to be super slick.”

Zola: Hopefully things will go better than when Nicholas Braun’s character in Zola went with his girlfriend to Florida that one time.

Wake-Up Call: George Clooney revealed some sobering thoughts he had after experiencing a bad motorcycle accident in 2018. He was going 75 miles per hour in Sardinia when a car turned in front of him and he flew over the handlebars. In an interview with The Sunday Times, he explained that he’s “fine now,” but the shock of the accident is still with him.

Clooney Says: “I was waiting for my switch to turn off,” he told The Sunday Times. “If you’re in the public eye, what you realize when you’re on the ground thinking it’s the last minute of your life is that, for some people, it’s just going to be entertainment for their Facebook page. I’m a pretty positive guy, but that told me, clearly, that you really are here just for their entertainment. You want to take everyone and shake them.”

Before You Go: Please enjoy some of Cousin Greg’s Greggiest moments.