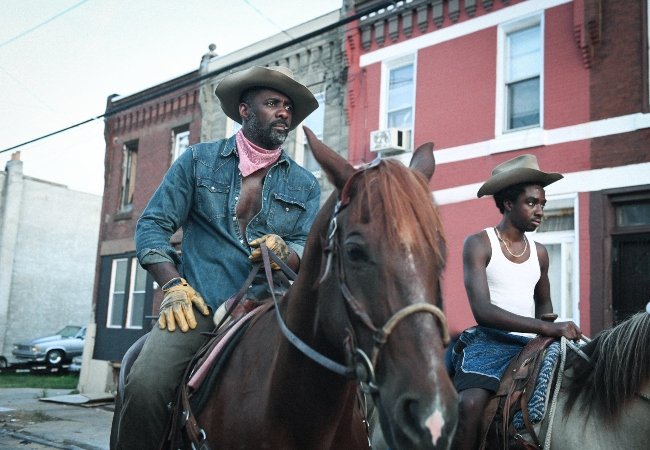 Concrete Cowboy was filmed in the very Fletcher Street neighborhood in Philadelphia where the story starring Idris Elba, Caleb McLaughlin, and Jharrel Jerome takes place. And the house where Elba’s character, Harp, lives? It’s nearby — and they really did get a live horse in there.
Real estate broker Ryan Spak and Concrete Cowboy director and co-writer of Ricky Staub told Philadelphia Magazine how they did it.
“In the story, the character of Harp, who is played by Idris Elba, lives in North Philly and keeps a horse in his living room in a row home, which, based on stories from the real Fletcher Street cowboys, is something that has happened in the past,” said Staub, who is also the founder of Neighborhood Film Company.
Concrete Cowboy follows McLaughlin’s character, Cole, a teenager whose mother drops him off to live with his estranged father for the summer after he’s expelled from school. Though at first he resists, he ends up getting swept up into the neighborhood’s intoxicating city-cowboy culture — and forming a deep connection with the wildest horse on the block.
Also Read: Here’s What the Real Herman Knippenberg Thinks of The Serpent
Staub recruited Spak to find the location for Harp’s row house, which is where some of the most emotional moments between Elba and McLaughlin’s characters take place. 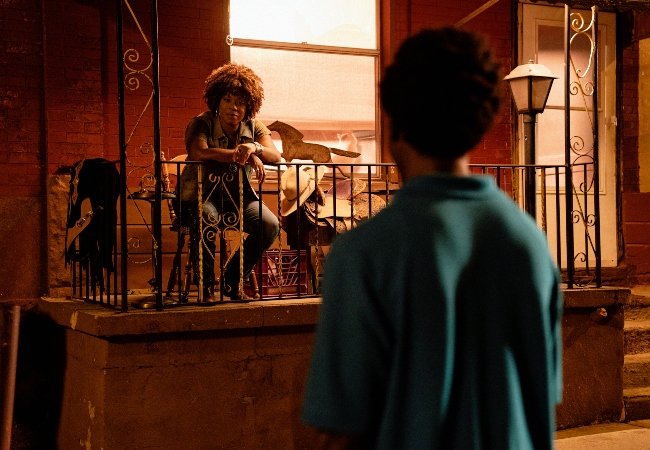 Lorraine Toussaint as Nessi and Caleb McLaughlin as Cole in the row house next to Harp’s in Concrete Cowboy. Photo Credit: Jessica Kourkounis / Netflix

Spak found the perfect house, and didn’t realize it would have a horse in it until overhearing someone from the production mention that part of the plan.
“I said, ‘I’m sorry, excuse me, you want to put a horse in this house?’” he recalled.“They said, ‘Yeah.’ And I said, ‘With all your equipment?’ ‘Yeah,'” Spak recalled. “’With Idris Elba, the sexiest man in the world?’ And they said, ‘Yeah.’ And I said, ‘No, you can’t do that. This is a 90-year-old rowhouse.’”
Also Read: People Are Going Bonkers Over Loki’s Quirky New Buddy in Disney+ Trailer
Eventually he was convinced. But the house needed its basement structure rebuilt to support the weight of the horse, the equipment, the actors, the director and the cinematographer, Philadelphia Magazine reported. The average American Quarter Horse weighs between 950 and 1,200 pounds, according to one horse blog. 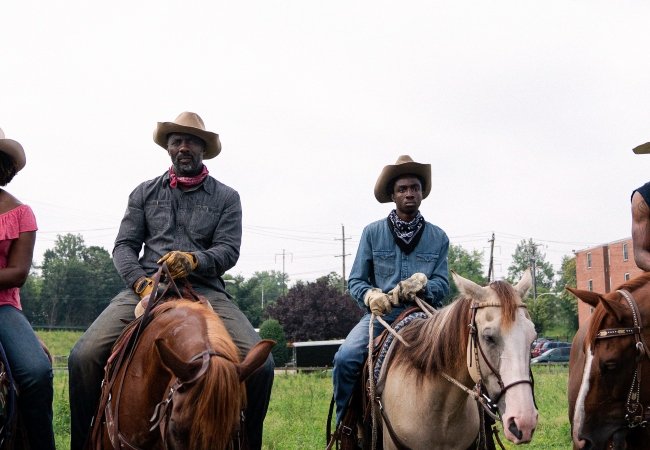 Getting the horse into the house turned out to be the comparatively easy part.
“The horse actually does fit through an ordinary door,” Staub said. “We worked with the Horse Wranglers, which is a company that provided the trained Hollywood horses. And we built a ramp at the right grade, according to their specifications, that went up the stoop and into the house.”
But the row house was still quite small. Especially with a horse in it.
“It was a typical Philadelphia rowhouse — two stories, 950 square feet,” Spak said. “Which is why it was so funny when the team wanted to put a horse in it, but their vision made for an amazing scene.”
Concrete Cowboy is now streaming on Netflix. Main Image:  Idris Elba as Harp and Caleb McLaughlin as Cole in Concrete Cowboy. Photo Credit: Aaron Ricketts, courtesy of Netflix.
Continue Reading
Advertisement
Related Topics:Caleb McLaughlin, Concrete Cowboy, feature, fletcher street, Idris Elba, Jharrel Jerome, Philadelphia, Ricky Staub, Ryan Spak

Did 'White Boy' Rick Wershe Jr. Ever Get Released From Prison?
We Set Out to Make Drought — We Got a Hurricane