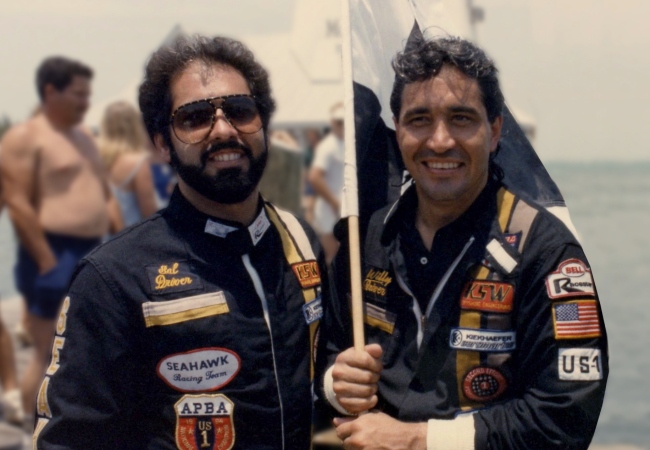 Despite its title, two of the main figures profiled in Cocaine Cowboys: The Kings of Miami, didn’t go to prison on cocaine convictions. But that doesn’t mean Salvador “Sal” Magluta and Augusto ‘”Willy” Falcon got away.

Episode 1 of the docuseries, titled Willy & Sal, details the dramatic rise of the two Cuban-American friends who, according to The Miami Herald, “built a South Florida empire as cocaine smugglers for the Medellín and Cali Colombian cartels in a deadly drug trade that played out on Miami’s streets.”

The docuseries details their rise and fall from the 1970s to 1990s, including a series of close calls before they were eventually imprisoned.

One particularly close brush with the law came when Magluta was spotted by two detectives while out shopping for office supplies in 1988, according to the docuseries.

Retired Miami-Dade Detective Alex Alvarez says he and fellow detective Jorge Plasencia were the ones who arrested Magluta that day.

“I’m shopping, I’m looking, and the next thing I know, I feel Jorge Plasencia tugging at my shirt. And he goes, ‘That’s Sal. That’s Sal Magluta,'” Alvarez says in Cocaine Cowboys.

“They went to high school together at Miami High. We knew that Sal was wanted — in fact, we had his last known booking photo in our visor in the car. He’s a big fish. We walked outside, I drew my gun and I put it behind his head, and I said, ‘Sal don’t move, you’re under arrest,’” Alvarez continues.

They took him to the local jail, where he was to await transportation to prison with no chance of making bail. But when they came back a few days later, Magluta was mysteriously missing.

Magluta’s former girlfriend, Marilyn Bonachea, remembers getting a phone call from him the day he was released.

“I said, ‘How’d you get out?’ And he says, ‘I did a favor for somebody that works at the jail,’ and they decided to return the favor and falsify his papers so he could get out,” Bonachea explains in the docuseries.

Magluta and Falcon would continue to evade prison time for several more years, but ultimately they both succumbed to the justice system. They are both still alive today.

In 1991, they were indicted for drug trafficking but were acquitted in 1996 after a lengthy trial, according to the New York Times, which added that both Magluta and Falcon admitted they had been traffickers from 1978 to 1980, but said they retired from the business after pleading no contest to Florida state charges in 1981.

“Later, it turned out that Augusto Falcon and Magluta had bought off witnesses and at least one member of the jury, a foreman who did 17 years in prison after accepting $400,000,” The Associated Press reported.

Magluta was convicted in 2002 of drug-related money laundering and was sentenced to a whopping 205 years in prison, which was later reduced to 195 years, according to The AP.

Today, he is serving his time in a supermax prison in Florence, Colorado, according to Newsweek. The outlet noted that other famous criminals serving time in the same prison include Boston Marathon bomber Dzhokhar Tsarnaev and Mexican drug lord Joaquín “El Chapo” Guzmán.

As for Falcon, he pleaded guilty to money laundering charges in 2003 and took a plea deal that got him a lighter 20-year sentence, according to The AP. He was released in 2017.

But because he was not a U.S. citizen, Falcon was deported to the Dominican Republic rather than his native Cuba. His attorney argued that he would be in danger there due to charitable donations he made to anti-Castro organizations, Billy Corben, the director of Cocaine Cowboys, explained to Newsweek. Corben would not disclose where he believes Falcon is currently residing, but said that he was later asked to leave the Dominican Republic and is now living elsewhere as a free man.