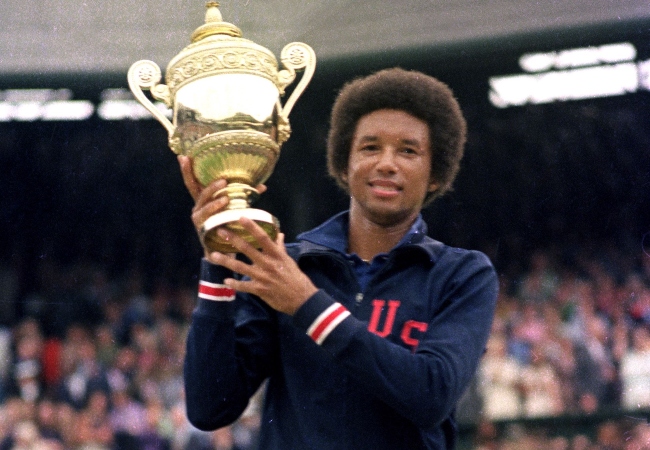 “Tennis is having a little bit of a moment,” says Rex Miller, co-director of the new Arthur Ashe documentary Citizen Ashe from CNN Films, HBO Max, and Magnolia Pictures.

“I’ve made a few tennis films, and being a tennis player, I love watching them.”

Miller is not alone in that love.

Citizen Ashe, the new documentary about Ashe, the American tennis legend who became the first Black man to win not only the U.S. Open, but later, Wimbledon, had its New York theatrical premiere on Friday. But the doc is not alone among the impressive lineup of tennis movies and TV shows that have recently emerged.

This year also saw the release of Warner Bros.’ King Richard, which follows the story of Richard Williams, father of tennis stars Serena and Venus Williams. Plus, Netflix’s Untold sports documentary series featured an episode focused on American tennis player Mardy Fish. And in 2019, Amazon made a documentary called Resurfacing about British tennis player Andy Murray. Tennis legends are even popular with the teens — John McEnroe plays himself as the narrator of Mindy Kaling’s Netflix series Never Have I Ever.

But Sam Pollard (MLK/FBI, Mr. Soul!), who co-directed Citizen Ashe with Miller, thinks that the recent flurry of tennis content isn’t necessarily about tennis, but rather about the sport’s wealth of inspiring stories.

“None of these movies are really about tennis. They’re about bigger things,” Pollard told MovieMaker. “King Richard is about the story of his family persevering through tremendous odds. And Arthur’s story I think is more about his activism, his personal journey, and tennis is more like the backdrop for that.”

“Any tennis player who is a person of color probably understands and knows the legacy of what Arthur Ashe accomplished both on the court and off the court,” Pollard added. “I think that the athletes today stand on the shoulders of Arthur Ashe, Jackie Robinson, Muhammad Ali, Jim Brown, Bill Russell, so many others.”

In total, Citizen Ashe took five years to make. Miller and his team decided to bring in Pollard later in the process brought later on in the process in order to assist with making some edits, because, as Miller explains, there was just so much rich detail in his life that it got hard to decide what to leave on the cutting room floor.

“I like putting everything in the pot. Oh, that’s interesting, oh, that’s so interesting. How could we not put this in? And there were a lot of things that I found really interesting that were essentially killed off as we say — my little darlings were killed off one by one,” Miller said.

Lucky for him, killing darlings is one of Pollard’s specialties.

“You always have to make hard decisions. We had a section in the film about Arthur’s book A Hard Road to Glory, and as much as we thought it was a very important part of his life, we just couldn’t make it dramatically as strong as we felt it could be, so it ended up being on the cutting room floor,” Pollard said. “When you’re doing biographies, some people have to put everything in, but I’m of the opposite mind. I’m always looking to make the most important stuff stand out dramatically and emotionally. And if the other stuff that’s still a part of his life [but] not as dramatic, I’ll leave it out because… I believe a documentary is not just about information. It’s about putting across a very dramatic story that has texture and nuance. And we were able to accomplish that with Citizen Ashe.”

Citizen Ashe hits theaters in New York on Friday and in Los Angeles on Dec. 10. It will air on CNN and stream on HBO Max in 2022.