Cheer: Here’s Why There’s No Interview With Jerry Harris From Jail in Season 2 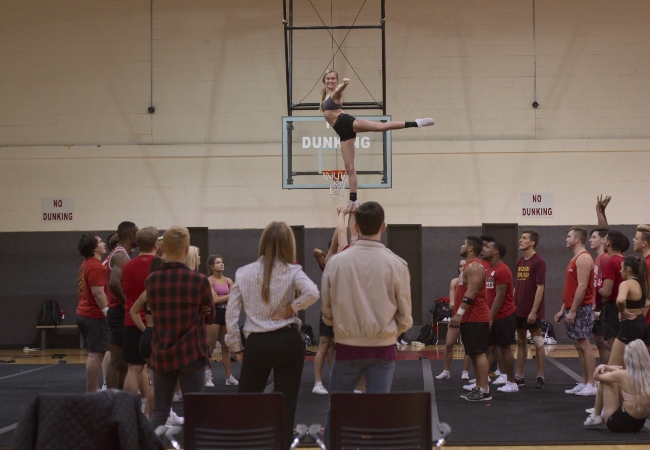 After the news of Harris’ arrest and the subsequent FBI investigation broke, the once-beloved cheerleading icon vanished from his Corsicana, Texas community — and from the remainder of the docuseries’ second season.

Today, Harris is in jail awaiting trial, where he faces over a decade of prison time if convicted of certain charges, according to The New York Times.

Cheer Director Greg Whiteley told MovieMaker why the docuseries doesn’t include an interview with Harris from behind bars, where he’s currently awaiting trial.

“Letters were written. Messages were conveyed to him. There were many overtures that were just — they just went unanswered,” Whitely said. “We tried over and over.”

A written statement in the docuseries explains that Harris’ lawyers declined to participate in an on-camera interview. But Whiteley maintains that if they ever changed their mind, he wouldn’t hesitate to pull out his camera.

“If I were to get a phone call today, I would try and get that interview,” he said.

“I believe in the process of journalism and documentary filmmaking… I’m not going to pull punches when I’m talking to Jerry. I want to understand what was going on. And I think that’s maybe one of the reasons why his lawyers felt like they were protecting him the way that they were protecting him, because they knew tough questions would be asked and have to be answered.”

The second season does, however, include a substantial interview with two twin boys who accused Harris of soliciting sexually explicit videos from them beginning when they were 13 years old.

“There really wasn’t much deliberation about whether or not we were going to tackle this issue, and we tackled it how we tackle all issues. We want to be open and curious [about] what happened, and we feel a duty to document that with as much integrity and honesty as we can,” Whiteley said. “In season one there were some tricky issues. We tackled those, hopefully, with a level of journalistic integrity. And then, of course, this issue, which is as complicated and as dark as it gets and it isn’t easy — but you do it the same way. And it would have been very, very difficult to properly tackle this issue, document this issue, without reaching out to those twin boys and getting their side of the story.”

Season 1 and 2 of Cheer are now streaming on Netflix.

Main Image: A still from Cheer Season 2, courtesy of Netflix.

The Idea of a Castle: The Tragedy of Macbeth Production Designer Stefan Dechant on Carving Sets ‘Out of Light and Shadow’
Jenna Ortega’s Journey From Disney Channel Star to Scream Queen