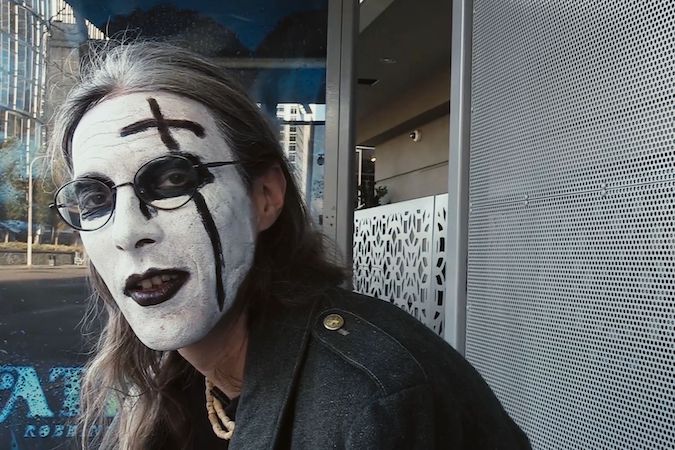 The new documentary You Can’t Kill Meme, by director Hayley Garrigus, explains the complicated and unconvincing idea that online “memetic magic” harnessed the power of the Egyptian frog-god Kek and the hijacked comic-strip character Pepe the Frog to sow chaos in the 2016 election, willing Hillary Clinton to fall and Donald Trump to rise to the presidency.

There is lots of evidence in the film that memetic magic is real— if you believed in it already.

If not, you may not be convinced by Garrigus’ talks with authors and self-proclaimed shamans, light workers, and chaos magicians. She lets her subjects talk and talk, without judging them. This is good journalistic restraint, but it can be exhausting for viewers who, like myself, don’t find them at all persuasive.

The main weakness of the documentary, which just debuted at the Fantasia Film Festival, is that we hear so little from the pro-Trump chaos magicians themselves. We meet lots of people who believe in magic — those light workers and shamans, for example — and not enough of the people who supposedly think they made Clinton fall.

Is it possible that whole thing is just another troll?

Confirmation bias abounds among Garribus’ interview subjects, like it does in so many corners of the internet. Still, it’s helpful to have so many of the theories behind memetic magic laid out in one ambitious 80-minute documentary, where viewers can assess them fairly quickly instead of losing hours (or more) going down internet rabbit holes.

Garrigus, making her feature-length debut, seems to believe that trying to police what people can will only push them to fiercer and more emotionally driven extremes. I tend to agree. Her documentary follows an inviting essay format, where she mixes background with her own opinions, including this one:

“As demonstrated by the policing of morality in Victorian England and during Prohibition in the United States, the more you repress something, the more desperately people want to do it. Online cancel culture has that same effect in today’s America. Most people, forced into this environment, will end up longing for a place where they can say absolutely anything.”

Also Read: How Pepe the Frog Became the Unwitting Mascot of Trolls, Racists and Incels

For some, those places were “chans” — online messages boards — like 4chan and 8chan, which became, this century, places where often-socially isolated people sought community. Some reveled in speech they believed was forbidden by society at large— especially on the board called /pol/, or politically incorrect. Participants tried to top each other — some because they actually believed what they were typing, and some for the lulz.
As was better explained in last year’s terrific documentary Feels Good Man, many participants in the chans adopted a cartoon frog, Pepe, a character in a comic by artist Matt Furie who personified laid-back, harmless slackerism. Feels Good Man fascinatingly touches on the subculture of self-identified NEETS — young people who are Not in Education, Employment or Training. These are the stereotypical online denizens who pass their days playing video games and “shitposting” trash on the internet, usually while living off of their parents.
Feels Good Man explained that NEETS and others on the chans embraced Pepe, turning him into a meme. But when mainstream “normies” began to adopt him, his online fans rebelled, trying to make him as repugnant as possible, creating memes associating him with Nazism, Al Qaeda, and others associated with hate and violence. In their anonymity, Garrigus explains, some espoused ideas like authoritarianism.
Some of these anonymous charmers really did hold racist, violent, authoritarian beliefs, and others delighted in “triggering the libs,” and it could be hard to tell who was who. Liberals who took the bait were mocked as suckers, or accused of trying to censor free speech, or worse.
Around this time, according to You Can’t Kill Me and Feels Good Man, many on the chans began to embrace Donald Trump, because they saw him as a way to break up a status quo that excluded them.
Enter chaos magic — and meme magicians.
You Can’t Kill Meme argues that online chaos magicians latched on to a 2004 book by Seattle author R. Kirk Packwood called Memetic Magic: Manipulation of the Root Social Matrix and the Fabric of Reality, in order to do harm to Clinton and boost Trump.
The book’s cover included an image of a frog magician, which Kirkwood says, with the benefit of hindsight, is important. Meme magicians, so the theory goes, combined the viral power of Pepe and the ancient powers of Kek, a god of darkness. 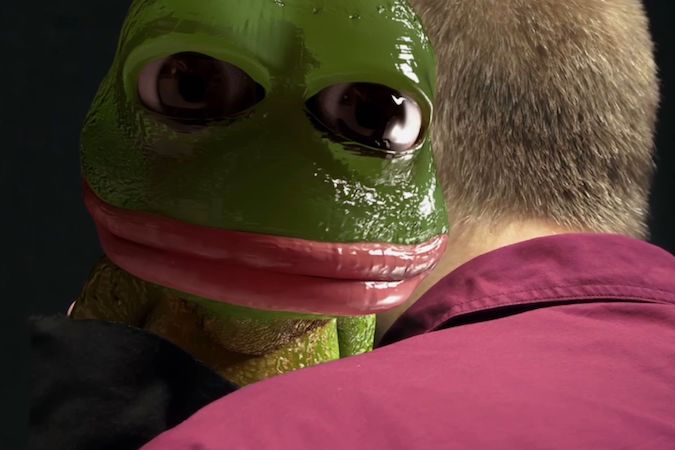 How does it work, exactly? Meme images quickly connote an idea — mischief, jealousy, suspicion, this person we’re all talking about it a dirtbag — with a sense of humor, which helps them spread their ideas more quickly and efficiently than, let’s say, an 1,100-word article about a documentary. The more they spread, the more powerful they become, or so the thinking goes.
But is that magic?
You Can’t Kill Meme argues that the pro-Trump chaos magic crowd got what they saw as a big win on Sept. 11, 2016. After they had spent months wishing ill health on Clinton, she fell down while leaving a 9/11 memorial service. All the better for the anti-Clinton forces was the fact that around the same time, her website posted an explainer about Pepe being “a symbol of hate.”
Trump’s election in 2016 gave them an even greater sense of validation. You Can’t Kill Meme includes an unforgettable quote from a January 2017 This American Life segment recorded at a pro-Trump event called the Deploraball.
“We memed him into the presidency,” says a Trump supporter named Jay Boone. “We memed him into power. We shit-posted our way into the future.”
Did the meme magicians attempt lots of other things that didn’t work? Well, yes, lots. And at one point in You Can’t Kill Meme, an affable “chaos magician/YouTube personality” named Billy Brujo helpfully reminds us that the scientific method requires that an experiment have observable, testable, repeatable results.
But part of the pull of memetic magic, Garrigus argues, is that it gives a sense of power to the powerless. Memetic magic is gaining popularity on the left, she says, as they, too, seek hope.
When we finally meet Kirkman, whose book we are told was the start of all this, he comes off as kind, vulnerable, and human — like maybe most people on the internet are, behind all the noise.
You Can’t Kill Meme is now playing at the Fantasia Film Festival. Utopia plans an on-demand release this fall, according to Variety.
Main image: Billy Brujo in You Can’t Kill Meme, directed by Hayley Garrigus.
Continue Reading
Advertisement
Related Topics:chaos magic, Donald Trump, Haley Garrigus, pepe, You Can't Kill Meme