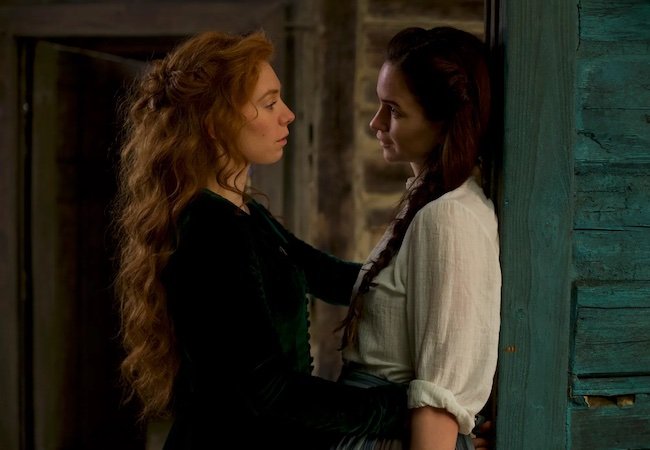 Casey Affleck, Katherine Waterson and Mona Fastvold take us inside the pioneering romance The World to Come, another prominent Affleck interviews David Fincher; Face/Off is getting an unnecessary but probably awesome remake; and Kristen Wiig tells a joke Bridesmaids didn’t do. Plus: Should Malcolm have cast Marie?

The World to Come: The latest MovieMaker podcast features Casey Affleck giving a very long, delightful monologue about the origin of The World to Come, which stars Katherine Waterston and Vanessa Kirby as two pioneer women falling in love. It involves a “weird restaurant by the airport.” Affleck produces and acts in the film, and joins Waterston and director Mona Fastvold for a chat with Caleb Hammond in the podcast, available on Google or Spotify or right here:

The Other Affleck: Here’s a great talk from Variety between Ben Affleck and his Gone Girl director, David Fincher, about the making of Fincher’s new film Mank. My favorite part is Fincher’s explanation of how his dad, Jack Fincher, came to write the script: “My father was retiring. He said he wanted a challenge.”

Face/Off Remake: The Hollywood Reporter says Godzilla Vs. Kong director Adam Wingard has signed on for a remake of the 1997 action classic starring John Travolta and Nicolas Cage at their most majestically flashy. You could make the case that Face/Off is a joy and should never be remade. But in fact it should be remade every year, with two different actors trading faces. (If you haven’t seen it, the joy of the movie is that Travolta and Cage’s characters surgically switch faces, and the actors then do hilariously catty impersonations of each other.) Which two actors would you most like to see attempt this? I’m going with Liam Neeson and Kevin Hart.

A Joke That Bridesmaids Cut: In this charming New York Times interview with Kristen Wiig and Annie Mumalo, the stars and writers of Barb and Star Go to Vista Del Mar, they reveal a joke that they cut from their previous film, Bridesmaids. Wiig explained: “When we were running around to find Lillian [the bride, played by Maya Rudolph], we were going to find a woman lying on the ground. We’re like, ‘It’s Lillian — she’s dead!’ And then we were like, “Oh wait — it’s not Lillian.” And then we just keep running.”

Relationship Advice: I laughed a lot listening to this very honest conversation about Malcolm and Marie on the latest Low Key podcast, where Aaron Lanton, Keith Dennie and very special guest Sam discuss stereotypes about how Black characters talk, whether Malcolm and Marie is too long, and whether Malcolm should have hired Marie to be in his movie, which she inspired. You can listen on Apple or on Spotify or here:

Do We Do Too Many Podcasts? How dare you. But also, you know we do videos too, right? Here are two from this past week:

Subscribe to Our Videos and Podcasts and this Newsletter You Are Reading Right Now: What’s the worst that can happen?

Finally: Happy Valentine’s Day to all you movie makers and movie lovers.

Main image, above: Vanessa Kirby and Katherine Waterston in The World to Come.