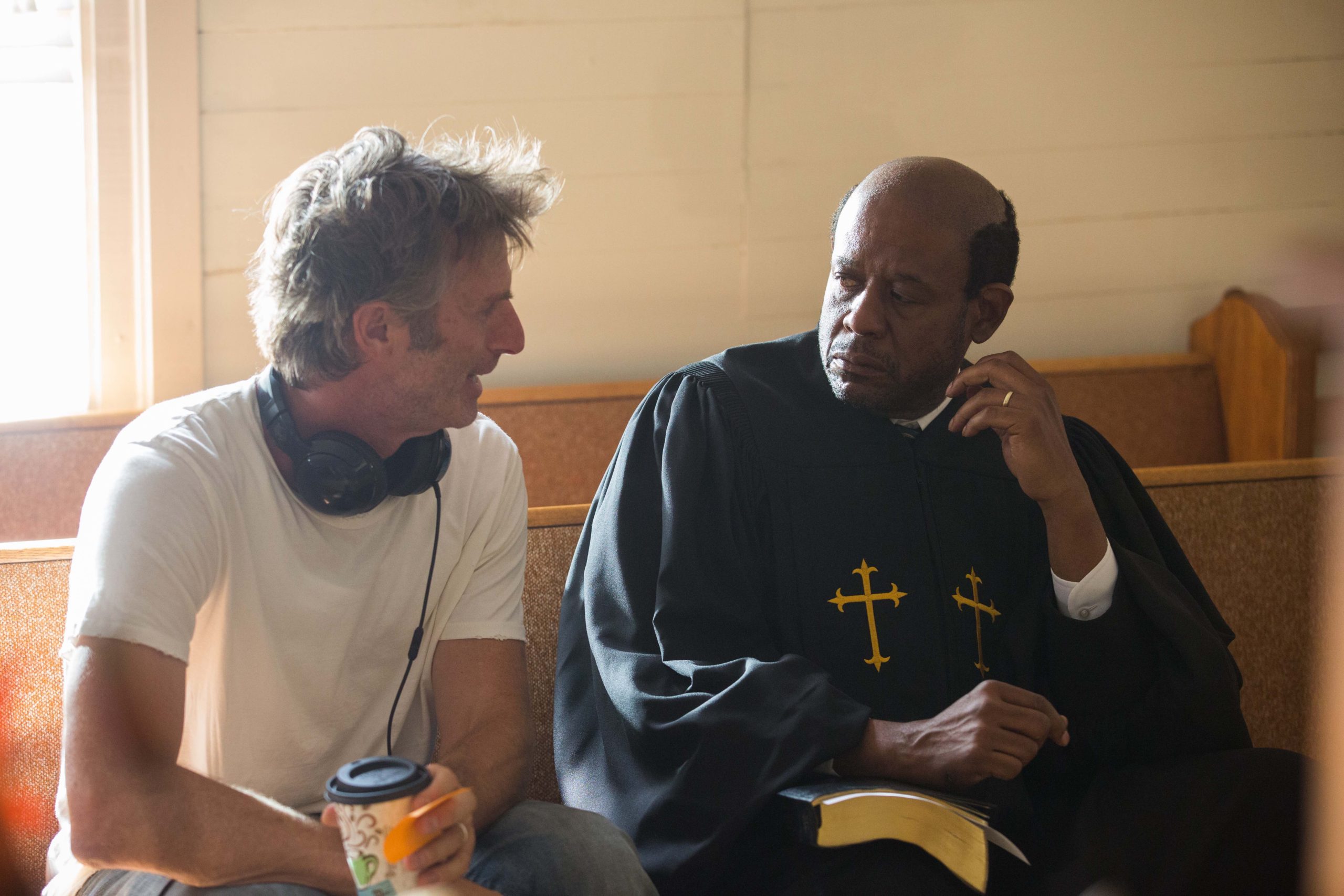 Burden, written and directed by Andrew Heckler and starring Garrett Hedlund, Forest Whitaker, Andrea Riseborough, Tom Wilkinson, Tess Harper, and Usher, is in theaters Friday. In this essay for MovieMaker, Andrew Heckler talks about going out and living in small-town Laurens, South Carolina to research his story of a man raised by the Ku Klux Klan who is later redeemed by an African-American minister.

Because a film before, I could only approach my debut feature, Burden, from my perspective as a theater director. And theater always begins and ends with the writing and the actors.

As a theater director, I always had a clear vision of what I wanted. I visualized each piece before the first rehearsal. Whenever I got to the first rehearsal, I encouraged my actors to come in with their best ideas, take chances, and to not play it safe. It was up to me to create an environment in which these actors could go along on this journey with me. And somewhere between my own initial vision and the riskiest choices I could bring out of my actors—that is where the good stuff lived. It was always a collaboration… never just my way.

Making Burden, I employed the same ideals. But as I transitioned to film, I realized that I needed to envision the production as I wrote the script. That process feels much more “shamanic” than structured. The most important idea that I took from my theatrical experience was the spirit of collaboration and open-mindedness.

I watched this scene a hundred times in my head, and coming into the shoot I had blocked it and knew every beat. I simply needed the actors to play it out as I had imagined it. This scene, I knew.

But when Andrea showed up on set that day, she saw it differently and wanted to try it her way. I pleaded with her that it was a waste of time, but finally we made a deal: She could try it her way and then she would try mine. Truthfully, I was giving her the space and respect to create, but I knew that I was going to keep my version.

Andrea performed the scene her way: She internalized the whole moment to the point of her lip quivering, beautifully combining anger with fear, pain, and sadness. Then she set up to try it my way.

I told her there was no need. Her way was “the way.” We moved on.

Learning the ways of the world

The greatest difference between making Burden as a film as opposed to a play, though, was in our ability to steep our actors, crew, and even our producers in the world of the film.

Even though Burden takes place in 1997, we were able to find locations and environments in small-town, central Georgia that mirrored the feeling of the real place and time. Garrett, Andrea, and Forest all took the time to get to know the real people our story was based on.

It was a heavy experience when Garrett and I met the real Mike Burden, but after we left, I made sure to tell him, “Throw all that away now. This is not a documentary. You are an actor playing the character written on the page as you interpret it. The time that you have spent with Mike has been ingested and digested and will pay dividends in your performance.”

This was absolutely true. It’s incredible how sometimes when I watch the film, Garrett disappears and Mike Burden shows up on screen. The process was truly worth it. By taking the whole cast and crew and immersing them in the reality of the world we depicted, we were able to get details and an overall attitude that we would have missed had we stayed in a nearby metropolis like Atlanta. 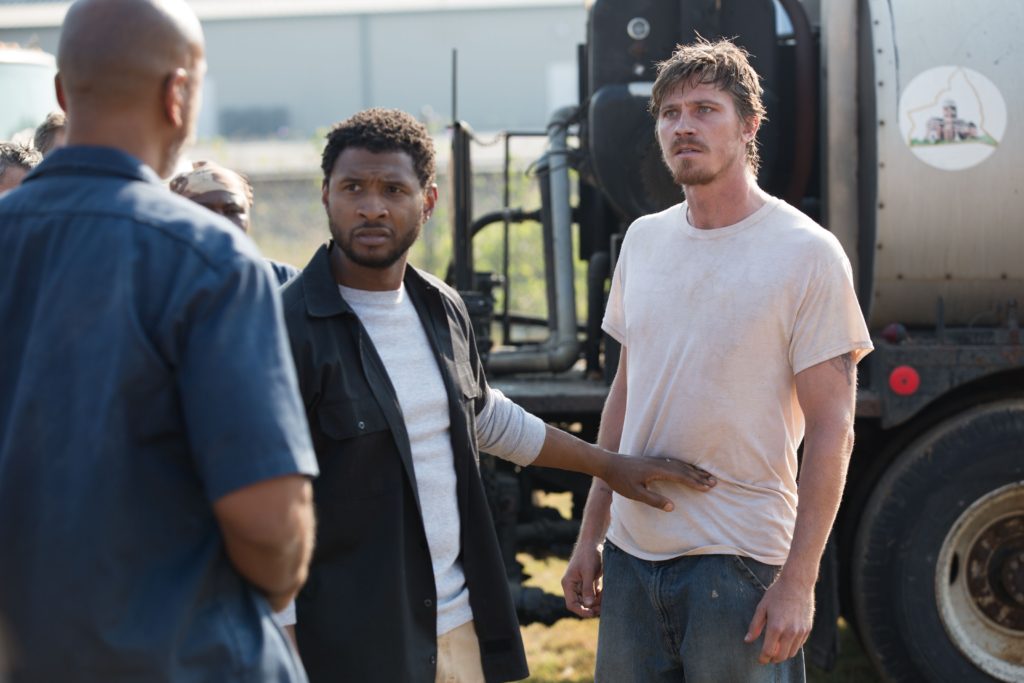 Grammy-winning singer Usher keeps the peace in a scene from Burden, directed by Andrew Heckler.

This real life research will not only make its way into your movie, but serve as the foundation for your writing.

During the making of Burden, I spent a ton of time in Laurens, South Carolina. The more time you spend, the more your subjects get comfortable with you and the more insights and real behavior and attitudes you can take in as a writer.

But first things first: Always pick up the phone.

When I heard about the true story behind Burden, I called the real Rev. Kennedy. He invited me down to South Carolina to hang out with him and his congregation and to better understand the social conditions of Laurens through their eyes. In order to get both perspectives truthfully, I later called the Klu Klux Klan leaders and introduced myself using a cover story, and they invited me down to South Carolina, too.

I got a first-hand look at the Church Congregation and members of the Klan and was able to interact with both. Ingesting the perspectives of these people through such an intimate experience is something you can’t do by only reading a book or an article… and certainly not by watching other movies.

During my research on Burden, I also spent a ton of time with a fantastic member of the New Beginning Baptist Church, Clarence Simpson, who is now the church’s pastor. Clarence and I drove around and shot the shit forever, and his insight into race relations and the Ku Klux Klan in Laurens is what challenged my “black-and-white” understanding of the region and led me to tap into the “grays” that make a screenplay really sing.

I’ll never forget how dumbfounded I was when, talking about the Klansmen and poor white men in the area, Clarence told me, “I feel sorry for those boys. Poor, Southern, male, black… supposed to be. Poor, Southern, male, white… ain’t supposed to be. Those boys are truly looked down on around here.” I learned so much from Clarence that I not only put all that wealth of knowledge into the movie, but also created a character named after and based loosely on him, played by Usher.

You gain trust by spending time with the people on whom your material is based, and that trust is something you should never violate. For better or worse, I bonded with the people of Laurens and felt a responsibility to tell their stories. All the hours I spent in the church kitchen making “Carolina slitch a mo,” for instance—hearing all the laughter coming from Rev. Kennedy’s wife Jan and members Wilhelmina Bates and Toosie—not only affected the film and my writing, but gave me human perspective about the true meaning of “joy.”

So many of us screenwriters never leave our offices in Hollywood when crafting a story, and that’s why so many of today’s films seem familiar. We’re rehashing stories, scenes, and ideas from our favorite films because we’re all cinephiles lacking life experience. That’s why when you see specific and truthful stories—Mean Streets, Amores Perros, City of God, Once Were Warriors, Breaking the Waves—they pop. Once we get enough work under our belt, move to L.A., or achieve financial and career success, we may have less inspiration to write. We become somewhat insulated. That’s why you need to get out of L.A., or wherever your comfort zone is, when you write. Witness vastly different lives, even if they’re not specific to the story you’re writing. I always say that I’m not smart enough to make up stories better than those already lived. It’s in all moviemakers’ best interests to go to the place you’re depicting and live in it. If you don’t, you and your movie are only skin-deep.

So, go! Get out of your house. Get out of your office. See, touch, smell. Let the characters and the world you’re writing about get under your skin and into your heart and let it affect your work on the script and on-set. Writing can be a lonely grind. When you approach your work alone, you’re only getting input from one source—yourself— and your own limited palette. But if you’ve done enough hands-on research, you’re never alone—you’re surrounded by the rich world you’ve dipped into. Your characters are alive and vibrant, your story layered and textured. You have a visual foundation steeped in reality to keep you company and serve as the springboard for your work. That’s when your creative potential begins to feel limitless.

Burden, directed by Andrew Heckler, opens in theaters this Friday, from 101 Studios.

StudioFest Offers a Chance to Make a $50K Film
8 The Irishman Inside Jokes and Callbacks, From David Ferrie to Don Rickles