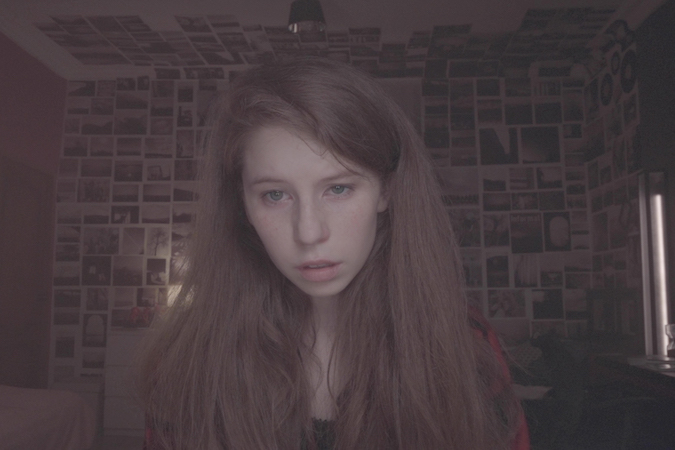 Blue_Whale is so dark and depraved that I wondered at times if its creators were just evil. Which is a great quality in a horror movie.

The Russian film follows a teenager named Dana (a very good Anna Potebnya) whose sister dies after playing a dark online game called Blue_Whale. Dana enters the game herself, looking for answers, and things get more and more awful.

The film, which premiered Tuesday at Montreal’s Fantasia Film Festival, is co-written and directed by Anna Zaytseva and produced by Russian-Kazakh filmmaker Timur Bekmambetov, who specializes in “Screenlife” films that unfold entirely on a computer screen. They include 2014’s Unfriended and three 2018 films: Searching, Profile, and Unfriended: Dark Web.

Unfriended, directed by Levan Gabriadze, largely popularized the genre after premiering at Fantasia in 2014. So Blue_Whale‘s presence at the festival feels like Screenlife coming home.

After a year of looking at computer screens, seeing a movie that takes place on one may sound extremely unappealing. But the excellent Searching, directed by Aneesh Chaganty, showed that such a film can have tremendous heart.

Blue_Whale is very grounded, and we empathize with Dana throughout, but the film seems less interested in moving us than in scaring us. Which it does well.

The constant texts and video calls — interrupted by sudden interruptions — control the pace of the action, and scares, in ways that more conventional films can’t. The transitions make for fast, elegantly ruthless storytelling.

The film is in Russian, but the cultural distance between the U.S. and Russia made the film more effective for me. While I haven’t seen Unfriended, a U.S._Russian film that is in English, I understand that it involves similar elements to Blue_Whale, notably online mystery and teenage suicide. More recent mainstream American horror films — at least from major studios — are bound by enough fear of critical and social media backlash that audiences can safely assume lots of awful things are off the table.

Removing the guardrails of American sensitivities made watching Blue_Whale, at least for me, a truly scary experience. You don’t know where the lines, or cultural censors, are. It seems like anything can happen, and anyone can killed and/or humiliated, quite horribly.

It plays at times like a very grim, hypermodern update on Scream, though the suicide-centered plot adds a grim update. (You can choose whether or not to be offended that the films references real-life Russian “social media suicide games.”)

All that said: I thought Blue_Whale was good, and effective, and much more frightening than the average slasher movie, even though it implies much more than it shows. The occasional violent moments are jarring because they stand out and feel so authentic. The art design, ranging from sewers to hideous masks to hyperreal security footage, adds to a sense of malice and dismay throughout.

I very quickly forget I was staring at a screen, and found myself instead pulled into a very dark mystery.

On The Divide: An Abortion Fight at the Border Plays at the rePRO Film Fest
5 Chilling Details From Netflix’s Memories of a Murderer: The Nilsen Tapes