Do you feel the need for speed? San Diego is back in the headlines, particularly its Miramar Marine base, once the location of the Navy’s TOPGUN training program. With Tom Cruise being spotted in San Diego through the fall as Top Gun: Maverick got underway, who could blame even local film officials for being excited? “It was very exciting to welcome Paramount back to San Diego for the sequel,” San Diego Film Liaison Brandy Shimabukuro tells MovieMaker. “Given what an icon the original is and its San Diego roots, it felt like a homecoming. Oftentimes, productions of this size are measured solely by economic impact—and with good reason—since a cast and crew of about 250 lived and worked in San Diego for nearly six weeks, but the reality is that hosting major productions like this isn’t just an economic boon, it helps bolster civic pride. We look forward to seeing our hometown on the silver screen in June 2020.”

Fighter jets or no, San Diego appears to be making strides to reassert itself as a player in the film production arena after budget cuts in 2013 went unaddressed for a couple of years. In 2015 mayor Kevin Faulconer hired a filming program manager, streamlined permitting and established online directories of local crew, but the building blocks of a deeply staffed and resourced Film Office are still falling into place. In July it was reported that a dormant 180,000 square-foot recycling facility in the city’s San Elijo Hills—45 minutes closer to L.A. than downtown—could be converted into a production facility, but what is needed is more coordination with local producers and local subsidies. A consultancy tasked by the site owners is reaching out to the city council.

Faulconer tells us that the official reestablishment of the Film Office in 2015 wasn’t just a statement to say they were open for business: “It was a message to the world that while San Diego may be the industry’s best-kept secret, it won’t be for long.” He also cites some of the cultural qualities that SD has to offer, from its history of promoting film, photography, and other arts to its binational location. “It’s a dynamic environment for anyone looking to tell their story,” he says.

“When filming in Dallas, you actually get two cities in one: Dallas and Fort Worth, and they are very different from one another,” says Liz Cardenas, producer of 2017’s acclaimed A Ghost Story and the 2018 comedy Never Goin’ Back. “You also get several unique neighborhoods and communities within and just outside of the DFW Metroplex. In my experience, both film commissions were extremely helpful with locations, as well as our various production needs, Fort Worth on Never Goin’ Back and Dallas on A Ghost Story.”

Cardenas says that Texas being a right-to-work state is also beneficial for low-budget indie moviemaking and that Dallas is a very commercial city, so there is a surplus of friendly and skilled crew members who work regularly and maintain an open mind when it comes to choosing projects even if they are low-budget. “For instance, on A Ghost Story I literally went door to door in the neighborhood and surrounding area to try to find a place we could use for ‘holding’ and sure enough, a very kind woman let us use her home,” she recalls. “I also got the wrecked car Casey Affleck’s character is in for free and a towing company took it to the set and back to the salvage yard for free when we were done.”

Augustine Frizzell, director of Never Goin’ Back, echoes Cardenas’ sentiments, particularly on the Dallas-Fort Worth nexus. “The Fort Worth and Dallas Film commissions both stepped in and worked to help us find authentic and accessible locations,” Frizzell says. “We had an embarrassment of riches with regards to the hardworking, professional crew. Given the budget level and the look I was going for, there’s no way we could’ve shot my film anywhere else.”

Cardenas adds that going the extra mile on Never Goin’ Back meant a business allowing them to shoot at their location for free or at a discount in exchange for “letting their kid be an extra in the movie.”

Another group to watch in Dallas is the entertainment company Cinestate, which bought horror brand Fangoria in 2018 and is building a new movie brand with a reimagining of the Puppet Master franchise, among other things. They recently wrapped on horror feature Satanic Panic, with Blumhouse alum Chelsea Stardust directing. “In terms of bang for your buck, there’s no better place to make a movie than Dallas,” says Cinestate VP Amanda Presmyk. “We’re able to stretch every dollar to make a movie that looks beyond its budget because of our home-field advantage.” She adds that having a talented crew base went a long way to achieving their mutual goal: “Satanic Panic’s budget was under a million and it’s a perfect example of what we’re building with Cinestate/Fangoria. We want to satisfy audiences who crave entertaining, boundary-pushing movies and we believe awesome movies don’t have to cost a fortune.” 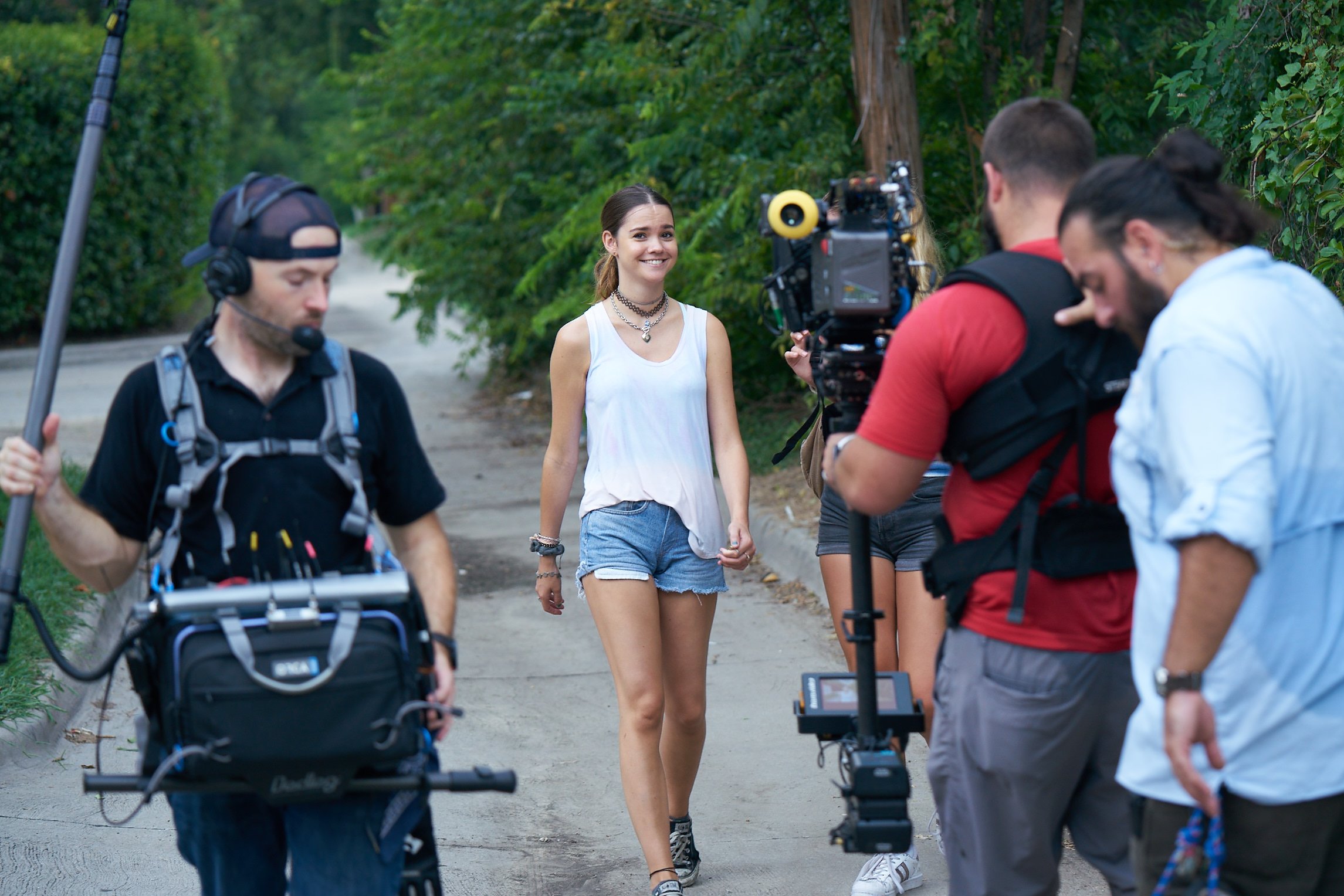 Star Maia Mitchell (C) and the crew of the Spirit Award-nominated indie Never Goin’ Back film on their Dallas-bound set. Courtesy of Liz Cardenas

Back in September visionary director Darren Aronofsky and French artist JR teamed up to create art where you might least expect it: projected onto the exterior of San Francisco’s City Hall. A black and white film clip of a group of people silently turning their heads, the film, entitled The Standing March, was intended to remind governments that the people are “watching” them on the subject of climate change. The projected film also served as publicity for the Global Climate Action Summit, which took place in San Francisco around the same time.

Earlier in the summer the Netflix comedy Always Be My Maybe, starring Ali Wong and Keanu Reeves, took over San Francisco’s Richmond District and was said to be shooting at the Fairmont Hotel, Golden Gate Park, the Palace of Fine Arts and other iconic SF locations. Around the same time in the Bay Area, Brad Pitt’s Plan B shingle and A24 (two entities that collaborated on Moonlight) began filming The Last Black Man in San Francisco, a drama about race and gentrification with Danny Glover and Thora Birch. In October another Netflix production, the 10-part LGBTQ-themed drama miniseries Tales of the City filmed in the streets of SF and will debut sometime in 2019.

Jimmie Fails and Jonathan Majors in Joe Talbot’s The Last Black Man In San Francisco. Photograph by Peter Prato, courtesy of Sundance Institute and A24

With the Texas Moving Image Industry Incentive Program having been whittled down to $22 million in 2017, the state isn’t doing much to promote Houston’s ambitions of being a top film production player. Not that Houston’s residents are waiting around; the spirit of DIY moviemaking is strong here. The city also has a film-positive Mayor, Sylvester Turner, who last year hosted a Film and Entertainment Summit with the goal of luring Hollywood players to Houston. More green shoots: The Sam Houston Southwest Film Investment Fund pledged last year to build six studio lots and production offices in the Houston area before 2020. Then there’s Houston’s population of working indie moviemakers who swear by their city.

“I live in Houston, and from the start I wanted my script to showcase the hometown that I love,” says writer-director Scott Brignac about his feature debut, Playing God, which shot over the summer. “Houston has a charm and personality that’s underrated. It’s a huge city with many locations and everyone is welcoming to moviemakers. I couldn’t have asked for a better place to shoot my first feature. One of my favorite days on set was shooting on a rooftop with Michael McKean and Alan Tudyk—I loved every minute of it, the energy of the city, the vibe and the architecture, and then to watch them deliver great performances, mixed with the backdrop of downtown Houston was honestly magical.”

Moviemakers Scott Brignac (R) and Cody Bess (L) during the final day of production on their 2018 Houston-shot feature, Playing God. Courtesy of Instagram

Spanish-speaking settlers first grouped around the San Antonio River in 1718, establishing a mission and a fort. The city that’s evolved over 300 years is a dense tapestry of Mexican-American, as well as German and other immigrant group influences and a cultural treasure all its own. Along the banks of the San Antonio River today you’ll find the River Walk, a city park with a network of walkways linking restaurants, historic Spanish missions and art installations, all testifying to centuries of history.

The city’s spirit of steady, constant improvement is reflected in its Film Commission, which is known as a reliable resource, able to secure permits, access and resources for moviemakers, and currently heading into year three the San Antonio Film Commission Strategic Plan, a five-year blueprint adopted in late 2016 to turn San Antonio into a thriving film production hub. (The city provides a local supplement for qualified productions, 7.5 percent on top of the state tax credit). We asked San Antonio Film and Music Commissioner Krystal Jones for an update on what had been accomplished since the plan was implemented:

“Once it passed, The San Antonio Film Commission immediately began implementing the strategic plan, developing more user-friendly online resources, a free and turnkey film permit process, and providing access to city brands and locations,” Jones says. “With increased marketing highlighting the plan and our message of San Antonio as a film-friendly city, a very successful 2018 included two projects qualifying for our local incentive, an increase in film projects and film days, film being a component in our city’s tricentennial celebration, and workshops and grants provided to moviemakers.” She adds that the plan is ongoing, with an open door for partnerships as the Film Commission continues to act as “an extension of production teams and an advocate for the film community.”