Big things have been afoot for the home of Los Pollos Hermanos since Gus Fring went to that big chicken restaurant in the sky. Albuquerque has gone from an attractive boutique city on the production map to a marquee player, attracting over 50 major productions in the last three years. It’s also recently played host to the highly-anticipated Nicole Kidman drama The Goldfinch (which was expected to hire 173 New Mexico crewmembers), as well as the next project from Drive auteur Nicolas Winding Refn, the Amazon series Too Old to Die Young, similarly expected to employ 100 local crewmembers.

Nothing, though, could be bigger than the October news that industry-changer Netflix has chosen ABQ as the spot for a production facility (after reportedly being enticed by over $14 million in development funding) that could drop a billion into the local economy over a decade. Netflix original Godless and pick-up Longmire already call New Mexico home, and the Netflix news was big enough to overshadow a mixed bag of data released a month earlier. The numbers showed a modest, cyclical slowdown in spending (a fall from $506 million in fiscal year 2017 to $234 million in 2018’s budget year), which New Mexico film officials attributed to growing pains and claimed was offset by a healthy number of indie productions, including 38 in the million-dollar range.

The Sabrina Carpenter-starring road movie The Short History of the Long Road, began production in April. Director Ani Simon-Kennedy (Days of Gray) offered praise for the state’s unique natural architecture and the work ethic of ABQ crews. “The crew we had was unparalleled,” Simon-Kennedy says. “The level of heart they poured into our low-budget feature went above and beyond. Everyone was resourceful and reliable; New Mexico was the perfect setting for our road trip movie since you can get such varied landscapes. We shot in the spring when the weather was cooperative, but it can get unpredictable—from gorgeous blue skies to crazy thunderstorms and back in an hour.” The Short History’s DP Cailin Yatsko concurs, stating that “as soon as you leave, you find yourself missing that beautiful New Mexico sky.” She also acknowledges the tremendous influx of talent, money, and industry pouring into ABQ: “Our biggest challenge was really the fact that ABQ crews are so busy—we were lucky our schedule worked out so that we got such an incredible team.”

For those who continue to primarily associate ABQ with its breakout Breaking Bad franchise, good news: The Emmy-nominated Better Call Saul, set in the flip-phone era, was renewed over the summer for a fifth season, while ABQ merchants continue to meet demand for all things Walt, Jesse, and Saul. Local fixture Rebel Donut still offers the Blue Sky donut with a (perfectly legal) sprinkling of blue rock candy, while RV tours of prominent locations of Breaking Bad and Better Call Saul continue to ferry superfans to over two dozen ABQ locations that are now part of TV history. 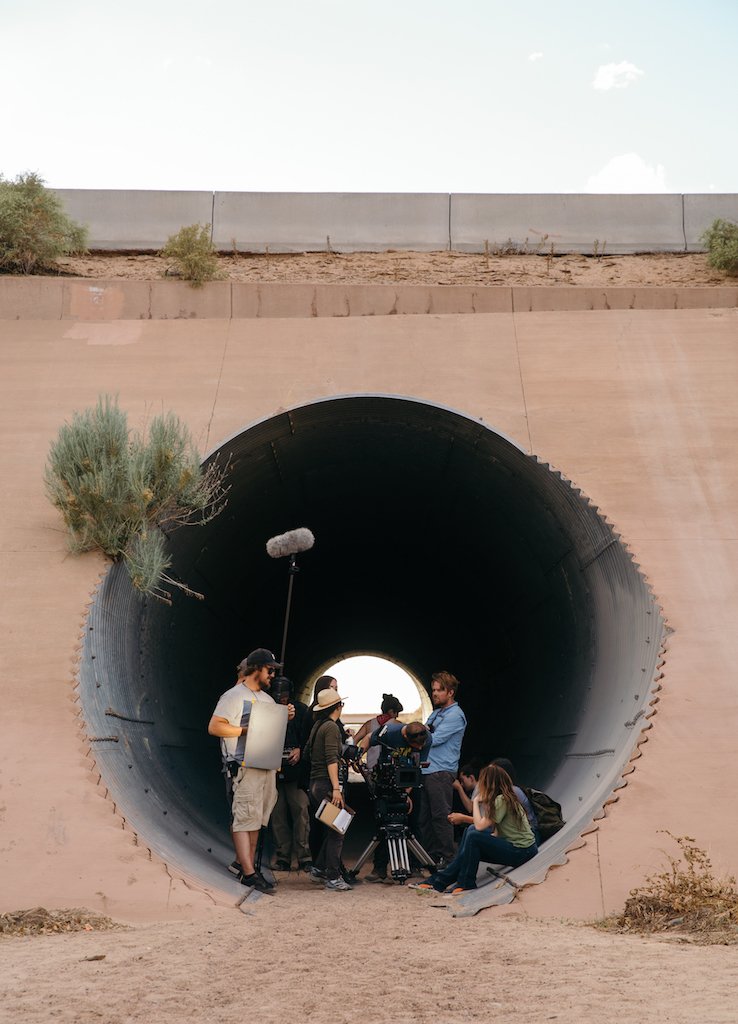 The Short History of the Long Road crew sets up a shot in Albuquerque, NM. Photograph by Lauren Segal