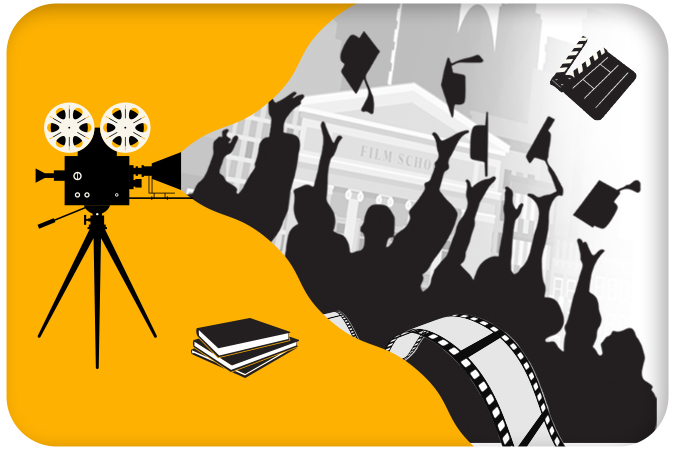 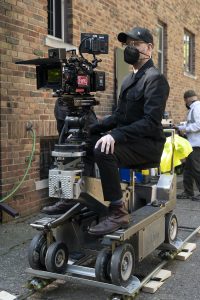 No Sudden Move director Steven Soderbergh is on the advisory board at Brooklyn College. Photo by Claudette Barius/Warner Bros.

Affordable and located in the heart of the East Coast industry hub on the Steiner Studios lot, this is a great school to get an MFA in cinema arts and learn a specialized skill such as directing, cinematography or editing. The three year program, overseen by two-time Oscar nominated producer Richard N. Gladstein (The Hateful Eight), grants students access to state-of-the-art equipment and facilities, including four sound stages and numerous postproduction suites. “We are a production orientated, hands-on program where students will make a minimum of five films,” Gladstein, the executive director of the Feirstein Graduate School of Cinema, tells MovieMaker. “We create an atmosphere where the making of projects is paramount and collaboration is taught and mandatory.” Director Steven Soderbergh, actor Ethan Hawke, cinematographer Rachel Morrison, producer Nina Yang Bongiovi and other industry titans sit on a newly created advisory board to mentor students on their films. 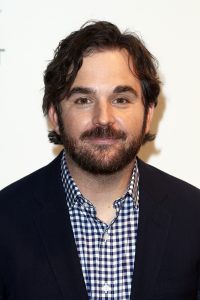 James Ponsoldt is a Columbia University grad, a perennial inclusion in our Best Film Schools list. Photo courtesy of Shutterstock

This Ivy League institution in New York City has long been considered a brilliant training ground for world-class filmmakers, including writer-director-producer James Ponsoldt (The Spectacular Now, The End of the Tour), who graduated in 2005. “The MFA Film program at Columbia University is a vital and supportive home for international storytellers united in a desire to make films that are as deeply personal as they are boundary-pushing,” he told MovieMaker. “Writers, directors and producers work side-by-side to challenge each other in a community defined by curiosity, empathy and courage.” The program, which covers both directing and writing, includes two years of creative workshops and related courses, followed by one to two years of thesis and research arts work. The faculty understands the importance of collaboration and networking in the film business, so students in the Creative Producing MFA concentration share the first-year curriculum and some of the second-year electives, creating a bond that lasts throughout film school and beyond. Students find their unique voices together while working on short and feature film projects, and then work together professionally. “They launch their careers together,” says producer Maureen A. Ryan (Man on a Wire), chair and director of production at Columbia University’s Graduate Film program, in a video detailing the program. A perfect example of this in action is writer Phil Johnston bringing fellow Columbia grad Jennifer Lee onto Wreck-It Ralph, which was her first screenwriting credit before she won an Oscar for Disney’s Frozen, which she co-wrote and co-directed. “One of the joys for me about coming to Columbia and teaching here is I see the students forming incredibly close friendships,” faculty member and screenwriter David Klass (Kiss the Girls) says in the same video. “I see them after they graduate moving out to Hollywood, pulling each other onto jobs and shows.” 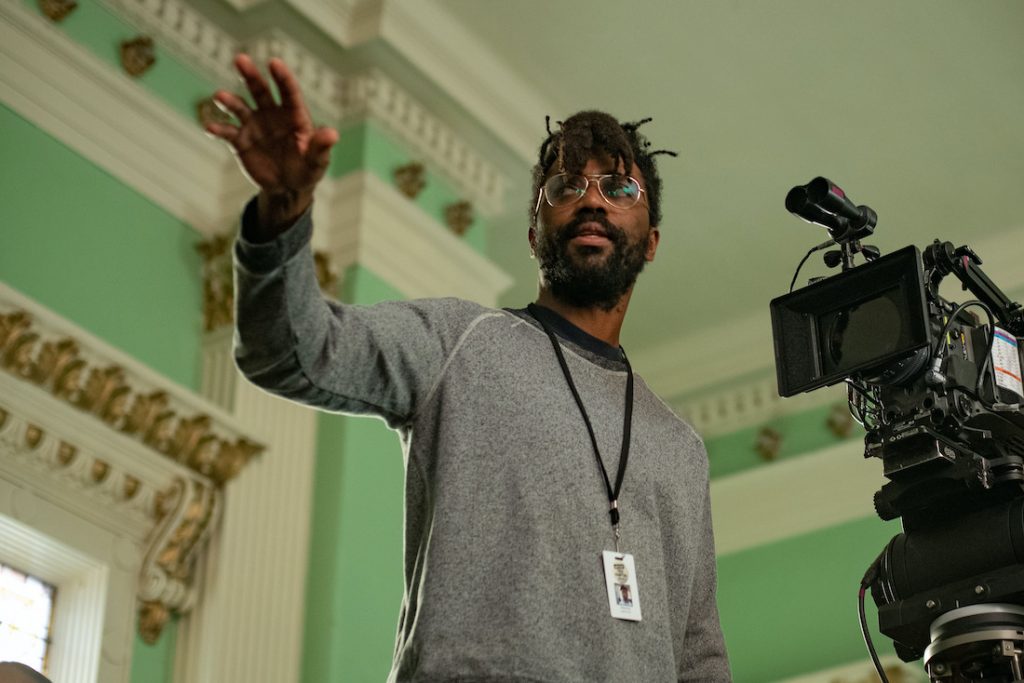 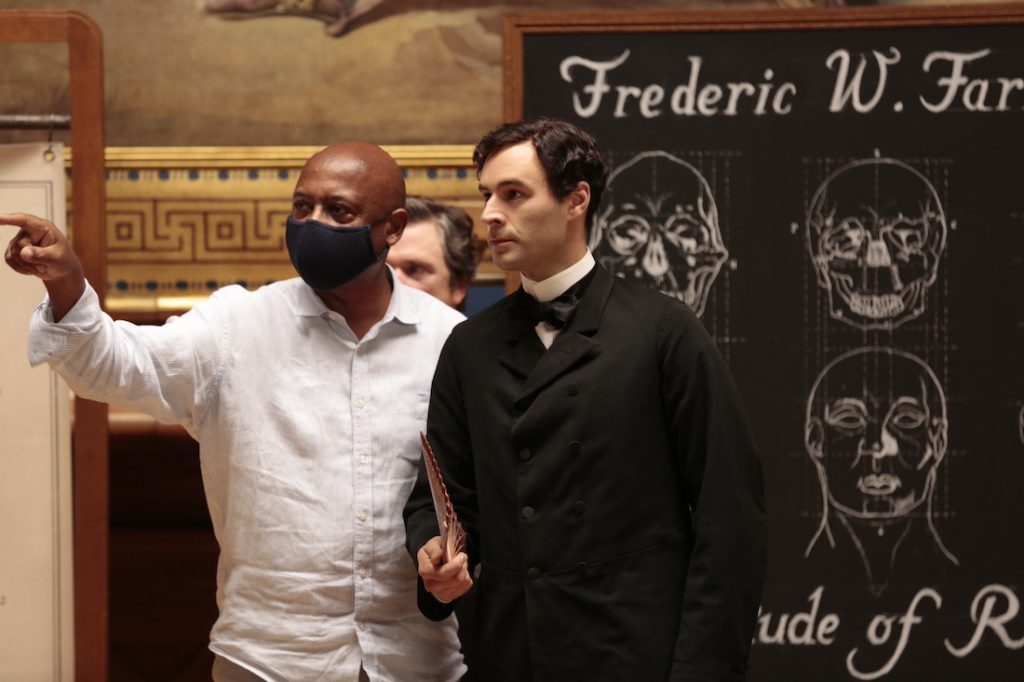 Exterminate All Brutes director Raoul Peck (L) was a Hirshon Director-In-Residence at The New School. Photo by Velvet Film/David Koskas/HBO

Filmmaking is just one aspect of a larger industry — the mass media — and this 100-year-old university located in the heart of the media capital of the world offers a master’s program that will immerse students in studying the various mediums that share human stories through audio and visual elements. The two-year education is designed to be broad or specific, with a limited number of required courses, allowing a flexible curriculum catering to students’ interests. Take a deep dive into digital cinema production of documentary or narrative storytelling to learn the craft, or take the scholarly route to analyze, criticize and philosophize about the history and future of film. In addition to a fine faculty of diverse media professionals, students will have the opportunity to learn from modern masters through the Hirshon Director-In-Residence, which previously featured Oscar-nominated filmmaker Raoul Peck (I Am Not Your Negro) and Oscar nominee Benh Zeitlin (Beasts of the Southern Wild). “It’s a unique opportunity for students to learn from contemporary filmmakers in an intimate setting,” Vladan Nikolic, the dean of the School of Media Studies, tells MovieMaker. “The filmmakers are very open about their processes, and all it takes to get a film made, especially for those films that are personal and oftentimes difficult to get made. Students have regularly said afterward that they have been immensely inspired by the filmmakers, and that these master classes helped them in thinking about and shaping their own work.”

All read: Felicity Jones Only Gets Love Letters

Networking is everything, and knowing the right people in Los Angeles might open up more doors than a degree ever will. Although Temple is based in Philadelphia, the school, which we highlighted last year for outstanding directing training, offers year-round L.A. Study Away opportunities. Students continue regular coursework pertaining to their degrees and are treated to prominent professional guests every week, all while getting real-world experience working in the industry as interns. 2009 TU graduate Mike Ganzman, who co-produces the Fox drama Prodigal Son and previously was an associate producer on NBC’s Blindspot, tells MovieMaker his experience in the internship program was “invaluable,” because it provided an enlightening glimpse into the industry that one can only obtain through the experience of working on the set of a professional production. “The people I interned for were able to give me a crash course in how they got into the industry, and gave strategic guidance so I could better position myself for success,” he says. “If you love film and TV like I do, you realize that even though you might start trying to go in one direction with your career, you’re working in a very creative environment that might lead your passion to be in another area of the business. Understanding how that all works is crucial, and I attribute this to the knowledge I gained early on while doing my L.A. internship.”

Continue for the U.S. Southeast schools of our Best Film Schools in the U.S. and Canada 2021