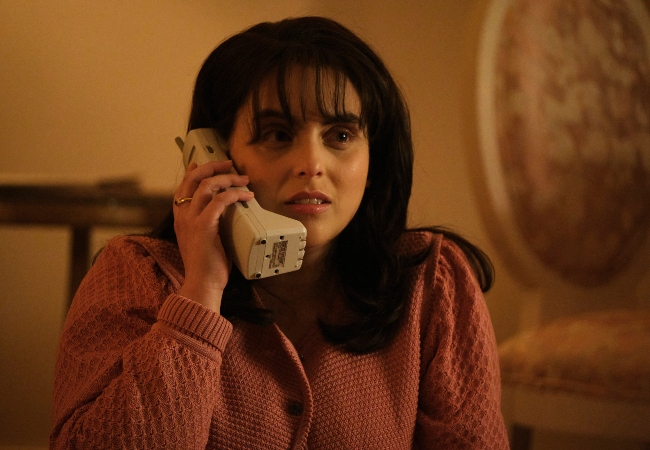 Beanie Feldstein spends most of Tuesday night’s episode of Impeachment: American Crime Story crying, and for good reason — it’s all about the fateful day that her character Monica Lewinsky got ambushed by the FBI and threatened with jail time if she didn’t cooperate with their investigation into President Bill Clinton, with whom she was having an affair.

Titled Man Handled, Feldstein told The New York Times all about the “grueling” 16-hour days she spent filming this week’s episode, which took weeks to shoot. But because of Feldstein’s severe allergies, she was unable to use eye drops or tear-inducing menthol sprays and sticks that actors sometimes use to help them cry on cue. (Business Insider has a very informative interview with a Hollywood makeup artist who explains all the tear-inducing methods in her on-set arsenal).

“This episode pushed me emotionally in ways I never could have ever anticipated or understood,” Feldstein told the Times ahead of Tuesday’s episode. “It was the most grueling, painful acting experience I’ve ever had.”

Without any tear-inducing aids, she chose instead to live in a constant swirl of punishing emotions that made her filming days quite taxing.

Feldstein’s dedication to the role — and impressive resilience despite being on a ripped-from-the-headlines- emotional rollercoaster — stunned industry veteran castmates like Sarah Paulson, who plays Linda Tripp, Lewinsky’s former friend who recorded their conversations and helped set up the FBI ambush, and Colin Hanks, who plays one of the FBI agents who detains Lewinsky and desperately tries to convince her to cooperate with the investigation. In the episode, Lewinsky (Feldstein) is so terrified and distraught over the potential legal ramifications of her affair with the President that her screams and sobs punctuate much of her dialogue — which includes Lewinsky famously calling Tripp a “treacherous bitch.”

“People think that acting is easy, and a lot of times it is,” Hanks told the Times. “But the stuff that she [Feldstein] was doing, man, I don’t know many people that could withstand that kind of emotional assault.”

Paulson spoke enviously of Feldstein’s ability to shake off difficult emotions after the cameras turned off, according to the Times.

“It was actually a wild learning experience to just think, ‘Wow, you can be really excellent at your job and not want to tear your skin off every five seconds,’” Paulson said.

Something else that motivated Feldstein to find those tears take after take was her desire to honor Lewinsky, who was an executive producer on the season.

“My goal was to just be emotionally true to what she was feeling at every moment,” Feldstein said.

She remembered that goal each time American Crime Story executive producer Ryan Murphy, who also directed Tuesday’s episode, asked her to do yet another take.

Going forward, Feldstein says her turn as Lewinsky will have a far-reaching impact on her. She’s about to play American comedian, actress, and singer Fanny Brice in a Broadway revival of Funny Girl — but the pressure of getting Lewinsky right is unlikely to be topped.

“It remains the most tremendous responsibility I think I will ever have,” she said. “Because I know I’ll play real people again. I’m about to play Fanny Brice. But there’s nothing like this.”

Colin Kaepernick’s Coming of Age; Will Poulter Joins Guardians 3; Superman’s Coming Out
How to Collaborate: Advice from Chris Gallagher, Head of SCAD Animation