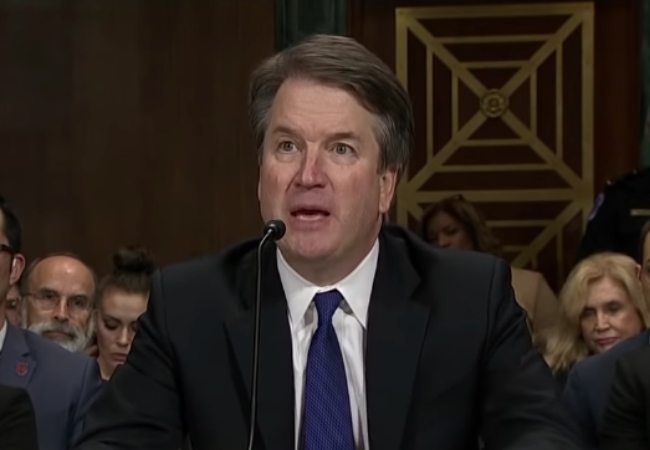 If you’ve seen this week’s episode of FX’s Impeachment: American Crime Story, you might be wondering whether that was Brett Kavanaugh in a meeting with former independent counsel Ken Starr, discussing the Starr Report that led to President Bill Clinton’s impeachment.

The scene occurs in Episode 5, titled Do You Hear What I Hear, when Starr calls a meeting to discuss the drafting of the Starr Report, and whether the FBI has gathered enough evidence against Clinton to recommend impeachment.

At that point, the investigators had not yet learned of Clinton’s affair with Monica Lewinsky, but the scene foreshadows how essential Linda Tripp’s recorded conversations will be: They provide evidence that Clinton had a sexual relationship with an intern and then committed perjury by asking her to lie about it in an affidavit associated with the Paula Jones case. (Jones, a former Arkansas state employee, accused Clinton of exposing himself to her in a hotel room at a conference when he was Governor of Arkansas. Her case was dismissed and Clinton has always denied the accusation).

In the scene, Starr and the prosecutors are discussing whether there’s enough evidence. Prosecutor Jackie Bennett (Darren Goldstein) turns to the man sitting next to him and says, “Kavanaugh, you don’t think we should just quit?”

The man replies, “I never want to take no for an answer, but Jackie, there isn’t a path forward here.”

It’s a brief scene, but the actor, Alan Starzinski, bears a striking resemblance to a young Kavanaugh.

The series’ showrunner, Sarah Burgess, confirmed that it was indeed Brett Kavanaugh — the same man now sitting on the Supreme Court. The “never want to take no for an answer” line is a grim reference to the accusation by Christine Blasey Ford that Kavanaugh sexually assaulted her when they were teenagers in 1982. He vehemently denied the accusation during his Supreme Court confirmation hearings.

“He wrote like half of [the Starr Report],” Burgess told MovieMaker. “He was a very active member of Ken Starr’s office… Kavanaugh wrote some of the most explicit parts of the Starr Report. He was an advocate for making the Starr Report more sexually explicit because he wanted to embarrass the president.”

Burgess is well aware of the gravity that comes with portraying stories of sexual assault or harassment.

“Of course, Paula’s story is a story of sexual harassment or sexual coercion possibly, and I was struck by, how would Paula Jones’ story be reported today? [That] was a question I asked myself, because of all the people Paula told… and all the ways Paula was disbelieved because of her gender and because of her class.”

Burgess continued: “I’m a member of the media, basically, and I don’t want to take the narrative away from these women again and misrepresent it. So that was a very specific type of writing process when you have that on your shoulders, and so I had to take very seriously picking the parts of the story that had to do with sexual harassment and sexual assault.”

Main Image: Brett Kavanaugh on CSPAN, giving his opening statement at the hearing before the Senate Judiciary Committee about Professor Christine Blasey Ford’s sexual assault accusation against him.

In Honor of 10 Years of AHS, Here Are 10 Things You Probably Didn’t Know About the Real-Life ‘Murder House’
Titane Director Julia Ducournau Did The Hardest Shot First