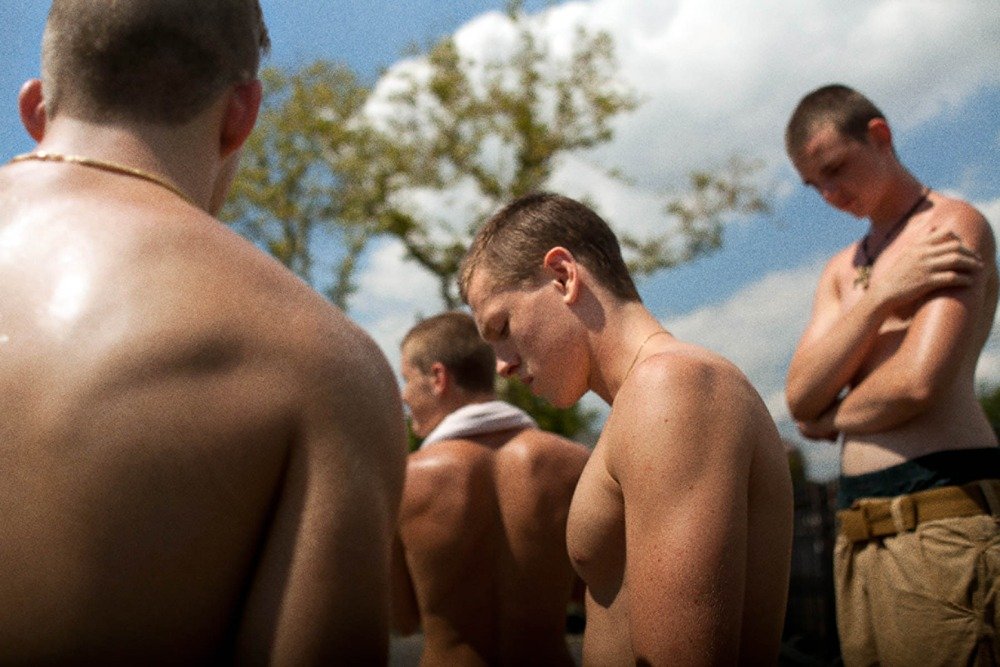 In her second feature Beach Rats, writer-director Eliza Hittman has once again crafted an atmospheric coming-of-age story set in her native New York.

In a film that purposely favors mood over narrative, we are led through tough guy Frankie’s (a tour de force performance from newcomer Harris Dickinson) world through his haunted eyes. His clandestine scouring of gay chatrooms stands in stark contrast to his public summer antics, which consist of shirtless handball games, getting high off his ailing father’s pain meds, hanging at the local vape shop and picking up girls at the Coney Island weekend fireworks. It’s clear that this extreme duality is destined for a violent collision, and when it finally happens, the results are as painful for the viewer as they are for young, confused Frankie. While never groundbreaking from a narrative standpoint, the beautiful 16mm cinematography by Hélène Louvart (known primarily for her documentary work on Pina and The Beaches of Agnès), standout performances from a crop of fresh faces, a moody soundtrack, and Hittman’s assured subtle touch make Beach Rats a compelling sophomore feature and Hittman herself a filmmaker to follow closely.

Caleb Hammond, MovieMaker Magazine (MM): Talk about the cinematography and your use of 16mm.

Eliza Hittman (EH): I think there were a lot of conversations that were had around the camera to use. Initially my visual reference for the film for some of the night shoots was an experimental installation called White Epilepsy by a French filmmaker named Phillippe Grandrieux. He used a soft frontal light on human bodies that combined elements of body horror and sculpture I would say. I was interested in how he used sound to shape darkness. I was thinking about all of these new cameras that are out that are incredibly light sensitive and I was feeling like I didn’t want to use a really light sensitive Alexa. I wanted to use 16mm because I would have more control and ability to shape light, and also, film black looks quite beautiful. I was thinking about the film in terms of being a narrative about a character who is confronting something in himself that is perceived as his darkness and wanting to be able to control this darkness on the beach.

I was also thinking about how not many female filmmakers working in the same budget range push for things like 16mm, but all of my male counterparts are married to it. There was something gendered about the choice also. I wanted the world of the film to have an anachronistic feeling also—be a little bit out of time. And I knew that film would give it that quality throughout.

MM: The performances are really incredible, especially those of the two leads, Harris Dickinson and Madeline Weinstein. What processes help prepare them for these roles?

EH: Harris and Madeline both did a lot of independent research. Madeline was very thorough, and she walked herself through all of the neighborhoods that we were shooting in, and sort of constructed her own narrative about her character—about where she lived, about where she worked, who she was and what her aspirations were. I think that physical homework was critical to her process. With Harris, we did a week of rehearsal, where he met everybody in the film. I did a lot of talking with him. But he, very much like me, doesn’t like to get too much in his head. He understood that the film was very behavioral, and was about observing this character navigate different worlds. He and I didn’t want to be too psychological about it. We had a few initial conversations, and then he also spent a lot of time just hanging out with the guys in the film, and doing things that were physical like basketball and lifting weights, and palling around with them. So it’s a little bit traditional and a little bit unconventional. But once we were shooting they were working without talking a lot, and we would shape and adjust a little bit here and there. Everybody understood the tone and the types of minimal performances we were looking for. Nothing was melodramatic or on the nose. I think they understood the kind of restrained work it was going to become.

MM: Did you run into any constraints or issues with the budget or the shoot length?

EH: It was tight, in terms of time. I don’t know we could’ve afforded more days. I’ve forgotten how many days it was at this moment to be honest; I think it was like 28? The coverage is fairly minimal. There’s only a few scenes that were cut from the film.

I’m not the type of person who runs things in series. I don’t think I would’ve shot more coverage with video [over film]. I don’t think that digital would’ve gone faster to be honest. We just didn’t have the ability to look at dailies a day later. There was a slight, like a two-day turnaround. There wasn’t this instant playback gratification.

MM: Tell me about the process of shopping the script around town once it was completed.

EH: I thought initially when we were casting, because I had done the Sundance Lab, and I had already had a feature at Sundance, I thought there would be more interest from an established actor, but it didn’t really get much attention when it went through the agencies. People just flagged it as having “male nudity.” “Gay sex” was sort of the stigma around it. It was a challenge to cast, because I really thought that there would be a young, male New York actor who would be dying to cut their teeth on it. They didn’t really exist, and for a moment I thought I would cast the role, and I realized that was impossible. I was never going to get a first time actor to do what the script asked them to do. I went back through our initial casting tapes, and Harris was in one of the first batches actually. We all just sort of re-watched his tape, and realized that there were a lot of intriguing elements to his performance and his audition. He didn’t try and amp-up his masculinity. He sort of framed himself in a very simple close-up that gave us direct access to his eyes; there was a lot of complication and confusion that we thought would sustain a lot of the film. Then when I talked to him he didn’t have any issues about the nudity. It was more about the story and the other stuff was irrelevant—not irrelevant, but just part of the world. It wasn’t an issue where we had to talk about my intention. He just understood it was part of the sensibility of the film.

MM: You’re from New York and have made two features here. But you’ve lived in a few different places for school. Are you interested in the textures of other places, or do you  see yourself continuing to make New York films?

EH: I only started working in the film industry this year. I work in academia, and I’m a professor at Pratt. So the summer is my window of time to make work. Part of it is convenience; I can write the story and have access to the locations and build the world as I teach essentially. Part of it, I think there are pockets of the city that are reminiscent to the complicated world that I grew up in. A lot of the city has changed sporadically. I’m interested in places we don’t see on film, thinking back to New York ’70s cinema. There was a little more specificity to the city on film.

MM: I thought the soundtrack was used expertly, never in obvious ways but always effectively. Do you want to talk about how it was woven into the narrative?

EH: I have to be fair and credit our editor Scott Cummings with a lot of the musical impulses in the film. They come from him playing around on his own with things he found online. One track he found was a hip hop track by The Overachievers, which had this really lovely intro which he experimented putting with our opening visual montage for the film, and then we contacted the person who composed and produced it—he was a 20-year-old named Leon in Miami. We had him modify it and adapt it and expand it and play with the tempo. There was something about this ethereal synth-y track that was playing against this hard abrasive narrative that we thought was an interesting pairing. I’ve never really used a lot of score or non-diegetic music in a film, so that was my first attempt. A lot of it came from our editor playing around and listening to things, and going down a rabbit hole on the internet and seeing what people were listening to.

MM: How much of your movie do you find in the edit? What is your involvement as a director in the editing process?

EH: If you read the script, what’s on screen is pretty close to what was on the page. I had two really small editors on the film who both understand and cut unconventionally. They favor tone over narrative and tone over dialogue. It’s a little bit more about finding a different rhythm and not cutting conventionally. There aren’t a lot of wide shots. It’s not following a pattern—it doesn’t follow a conventional editing patter of wide and then tighter, and then getting a close-up on a turning point. It’s much more subtle. There are a lot of subjective moments and scenes with no dialogue that are much more about rhythm and tone than story.

MM: Did you want to talk about your experience with the Sundance Lab, and the iterations your draft of the script went through?

EH: The first version of the script I wrote was very character driven and not very plot driven. It was a lot of catching this person at extreme moments in their life, acting out—this really extreme behavior. There wasn’t much of a progression to the story; it was just very extreme. One of my advisors at the lab watched my other film It Felt Like Love, then read the script, and told me, “Just go back and re-write it for progression.” That was the most helpful note at the time. I think that when you start writing a script you’re ultimately seeing if you have a main character that can sustain a narrative. It was a character study more than anything, but it needed steps. So I built in a little bit more of that structure in the rewrite I would say. MM

Making a Living by Mixing Media: How to Make the Leap From Directing Features to Directing Television
Make Out Party: You Are Cordially Invited to Say “Fuck You” to the System