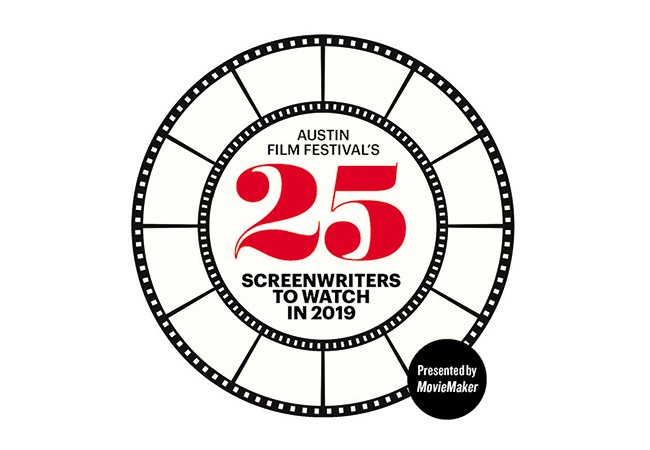 Whether you’re grinding it out in a large or small market, the first stage of moviemaking—screenwriting—is unenviably lonesome, full of endless drafts and a sea of revisions and second guesses.

For two decades plus, Austin Film Festival (AFF) has celebrated and served those brave enough to dive into this daunting process, championing silver screen storytellers who’ve willed their gluttony for punishment into promising careers. For our fourth straight year, we’ve partnered with AFF to highlight this year’s 25 Screenwriters to Watch.

Career Turning Point: “The major turning point in my career was when my friend Terry and I decided to turn our screenplay, The Black Tape, into a fictional podcast series. The screenplay was going nowhere so instead of letting it collect dust, we made it into something else. Now, due to that decision, we have careers in TV.”

Who: Won the Academy’s Nicholl Fellowship for his screenplay The Science of Love. Co-wrote the original feature Blue for Blueprint Pictures and feature adaptation The Girl with a Clock for a Heart for Unanimous Entertainment.

Hardest Scene to Write: “Every project has moments where you feel your whole story is broken and will never work. But that’s great—it means you’re doing something original and that the audience will truly believe your characters are screwed when they’re in trouble. It can take days, weeks, or years to figure out how to fix the problem, but the final story will be stronger because you didn’t plaster over it with an easy fix.”

Who: Davia’s passion for writing spawned from a desire to entertain—herself, first and foremost. After accumulating a diverse and extensive body of work at The University of Texas, Davia headed to L.A., where she is currently staffed on USA’s show Queen of the South.

Biggest Lesson Learned: “The biggest lesson I have learned is that asking for help doesn’t make me less of a writer. So much of writing is just one person sitting in front of a laptop that it’s easy to accept it as a solitary process. But it doesn’t have to be. It shouldn’t be. I think writers put so much pressure on themselves to be as close to perfect as they can be that it makes asking for help intimidating; I’m still that way sometimes.”

Who: Sean Collins-Smith is a biracial, award-winning journalist from Richmond, Virginia. He went on to work at a local news station, covering crime during the midnight shift. It was in this dark, violent world he discovered the inspiration for his first television pilot, End of Life, which was a finalist at the Austin Film Festival in 2017.

What He’s Working on Right Now: “I‘m currently writing a pilot about a small town impacted by back-to-back hurricanes due to the effects of climate change. It’s a hour-long drama focusing on varying characters—a farmer, a sheriff, a teacher, a rising political star, a recent high school grad turned vagrant—and how the storm, its flooding and the aftermath have changed the town forever. Surrounding all this is a murder mystery that may or may not be racially motivated, hitting home the idea of changing climates and chickens coming home to roost—or something.”

Biggest Lesson Learned: “Don’t write for the marketplace. It’s a moving target and no one has a crystal ball. When you’re breaking in, the most important thing is to let people see who you are on the page, that you understand how characters think, act, and talk, and that it feels authentic.”