Ari Aster on Building the Hereditary Haunted Houses From Scratch

Ari Aster, director of the acclaimed Midsommar and Hereditary, talks in this essay about one of the hardest parts of making Hereditary.

One day during the making of Hereditary, I broke down on set.

For a first film with limited resources, you need to have everything planned out to a T, including your blocking of actors and camera positions. But sometimes we needed to shoot 10 scenes in a day—it was crazy—and there was barely time to execute the plan, much less improvise. In case you have this idea that the set is some sort of liberating, “inspiring” space, I’m here to tell you that’s probably not going to be the case. You’re racing against the clock to make your day and to get it right and there’s no time for coloring outside the lines—you just have to keep moving.

For a film like this, so many special effects are required, and everything that we could do practically, I wanted to do practically. If you’re like me, you’re the kind of moviemaker who wants to try something you don’t quite know how to do on each new film. But you’re also not the kind who prefers to “find everything on set.” Here’s how I planned to survive the shoot, and survive what I couldn’t plan. 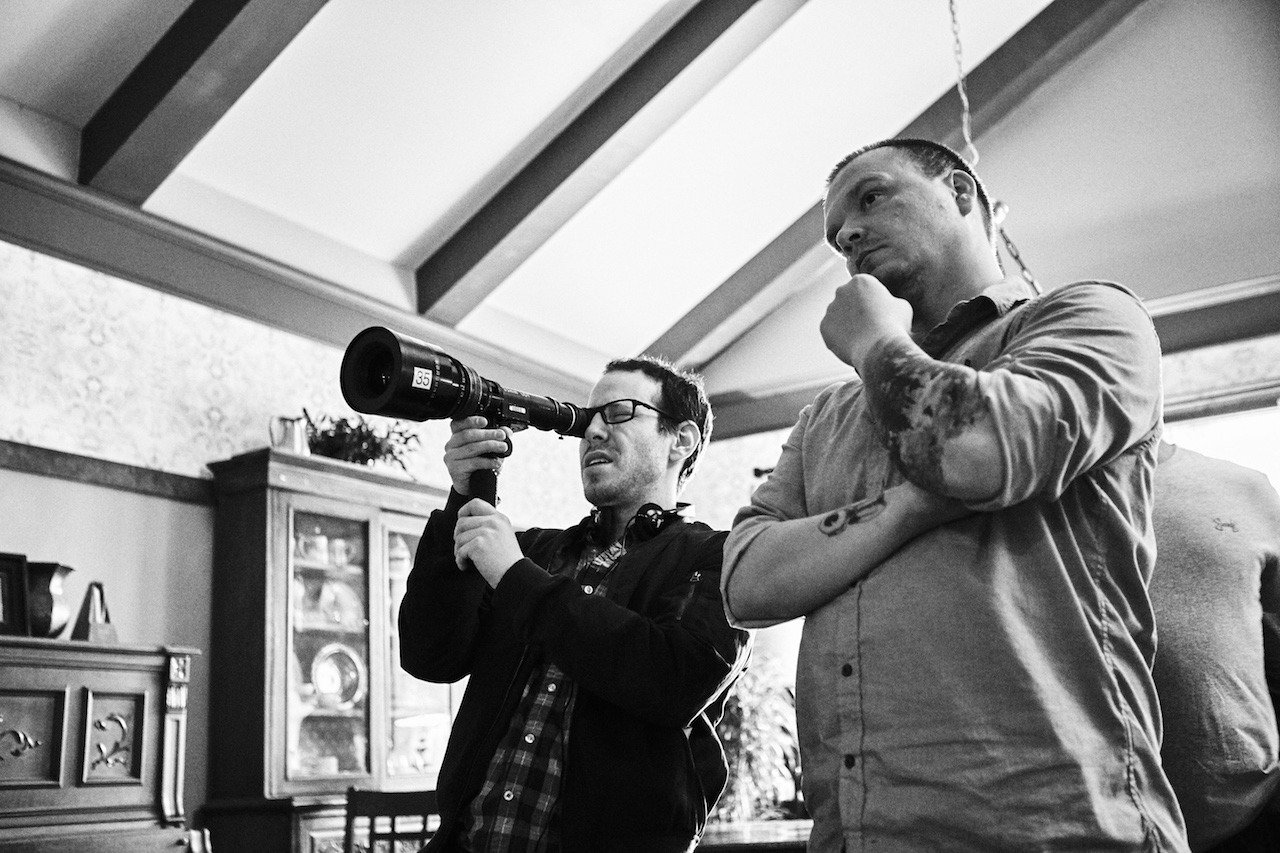 Three’s Company: For their sixth collaboration together, Hereditary Ari Aster (L) and DP Pawel Pogorzelski (R) recently added Panavision to the mix, working with the company on a custom set of prime lenses. Photograph by James Minchin, courtesy of A24

Thematically, the miniature homes and rooms that our protagonist Annie Graham (Toni Collette) builds for her upcoming art gallery show serve as a metaphor for her family’s lack of agency. The Graham family is a set of dolls in a maligned dollhouse, manipulated by outside forces.

Logistically, the miniatures we built posed a lot of problems. We needed to know not just the dimensions of the tiny rooms, but also the proportions of their wallpaper, beds, blankets, window curtains, furniture, and books—not to mention those books’ titles. We attempted to map everything out early enough to afford our miniaturist, Steve Newburn—who built the miniatures in Team America: World Police, and also did our prosthetics—ample time to replicate everything we’d eventually build.

For our life-size interiors I composed a shot list, as I usually do, so that I’d have a full movie in my head before speaking with my crew. I took my list to DP (and former AFI classmate) Pawel Pogorzelski and production designer Grace Yun and walked them through it. For every scene we mapped out what we’d need from each space, as well as possible camera movements, on a dry-erase board. Getting through the whole shot list so that they’d have the film in their heads as I had it in mine took about five hours a day for two weeks.

After a couple of months of unsuccessful scouting for a location that would cater to the shot list, we finally decided to build all the interiors ourselves, from scratch. Grace and I designed and customized everything for this, from the paneling, to the wallpaper, to the wooden floors. The exterior of the house is an actual location in Salt Lake City, Utah, but every interior—the bottom floor, second floor, attic, and interiors of both a smaller tree house and a larger tree house for our final scene—were all built on a stage.

Out of Order: Aster and Production Designer Grace Yun chose wallpaper designs while the miniaturist team needed to begin work on the furniture. Photograph by Reid Chavis, courtesy of A24

The opening scene of Hereditary required a trick shot, in which we pan away from a window and land on the miniature house with the front wall removed. A pan toward a wide shot of the bedroom is our cue to the audience that there’s a real boy sleeping in that room, and creates 30 to 40 seconds of lead-in time for Steve (Gabriel Byrne) to enter. To achieve this, we shot with tracking marks on the wall of the miniature of Peter’s bedroom, then shot a separate, static shot of Peter’s life-size bedroom with the wall removed. (We placed 10 stickers on the walls of both bedrooms, which helped our effects artist match their images in post-production.)

As a director, you’re always trying to communicate as clearly as possible. Having to design, build, and shoot to scale so quickly caused on-set pandemonium. We felt like we always gave plenty of information to the production design team, but understandably, they never felt like they had enough.

Game Set Match: Miniaturist Steve Newburn’s mini-set replicates the rooms of the life-size set for Hereditary by Ari Aster. Photograph by Reid Chavis, courtesy of A24

On the day we wheeled in the miniature Graham house shown in the first scene, the front wall was still there. It turned out we were on the same page about everything… except for the fact that the front wall was meant to be removed, to give us an X-ray view of the house. Steve gave me the option of either sawing off the front of the miniature house—which gave us a 50/50 chance of destroying the entire miniature, and virtually guaranteed that there would be unsightly splinters in the frame—or rethinking the whole sequence by keeping the front wall intact and leaving Peter’s (Alex Wolff) bedroom, which was already removed, visible.

I took a gamble and sawed off the front wall. Making this call had a happy ending, and there was no unsightly mess, but there easily could have been—or I could’ve chosen to not saw off the wall, which would’ve led to a totally different shot.

In other instances, we found ourselves making decisions in the wrong order—deciding on the exact scale of items and the wallpaper design, when really what we needed was to get going on crafting the furniture. You have all these amazing craftspeople with whom you talk things over a million times, only to find that the one thing that you never even considered to clarify, based on your own feeling that “It’s so clear” in your head, is the thing that was somehow missed. Correcting these mistakes was a matter of sharpening our communication skills, and that’s the kind of thing you have to be prepared for every day on set. Even after you’ve diligently accounted for everything, you’re still faced with some unanticipated dilemma.

Beyond Measure: Ari Aster says the scale for Hereditary‘s miniatures was larger than the team expected at 1:8—about the width of two tables. Photograph by Reid Chavis, courtesy of A24

Welcome To The Dollhouse

Hereditary contains other shots with removed, life-size walls, which were shot at a great height in order to get as wide an angle as possible to dwarf the actors. This is part of the film’s aesthetic: to make the characters look and feel like dolls in a dollhouse. Building the house on a set gave us the huge practical benefit of pulling back further than you could in an actual location with immovable walls.

It was important for Pawel and me to shoot these moments with Brechtian distancing effects, to create a certain artifice so that the house felt like a miniature and yet didn’t at the same time. It was a contradictory, yet grounded feeling that the house was at once a dollhouse and lived in. Because we were building it, there was always the danger of ending up with something that felt too artificial, so that was something we had to work against as well.

Cinematographically—especially in Hereditary—I always like to go wider. I like my wide shots to be very wide, and if I’m going in close, I like to go very close. For our desired “lived-in dollhouse” effect, there were initially four lenses that we really loved, but either the lens flares, the bright or hot lights, or the way the lenses treated shadows weren’t quite right. So Pawel worked with Panavision to create special prime lenses for us that had never been used before. We combined the four lenses that we loved and instructed Panavision’s team to remove what we didn’t like from each.

We went full Sirk on Hereditary. I’ve always loved how Douglas Sirk shot the interiors of houses in his melodramas, so we chose his go-to aspect ratio of 2:1. Similarly, in true melodramatic tradition, it was important to me that this film worked as a family drama before I bothered with any of the horror elements.

Child’s Play: In Hereditary, by Ari Aster, Annie’s miniatures work through the trauma of growing up her mother’s daughter. Photograph by Reid Chavis, courtesy of A24

There are going to be a lot of crossed wires when you’re doing work like this and your entire team is not operating in the same space. Steve is Toronto-based, and we were in Utah, and the experience of collaborating remotely was a real education. Tasking someone with creating a miniature, without them having a model of what the miniature is replicating or representing, was especially tricky.

From our perspective, we weren’t shooting anything that involved miniatures until the last week of shooting, because we knew that we needed as much time as we could get. But Steve and his people were anxious to get started, because it’s so hard to make those building-based decisions. Steve’s team built the fixtures up until we shot them, which made matters extra stressful. By the end of the production, Steve and Grace learned how to align themselves to work together. In retrospect, though, our one month’s worth of lead-time for the production design team should have been closer to three months.

On many projects you can be pretty laid back about set dressing, but Hereditary demanded that we be sure about everything very early on. This was a relatively low-budget film, and a low budget means an even lower supply of time. It’s a nightmare when you’re in it, but when you’re done, your vocabulary expands, and each new project becomes a little less frightening when it’s time to take those leaps of faith. MM